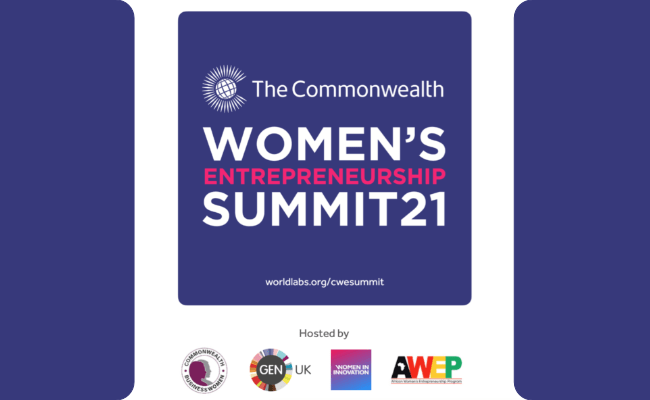 The inaugural Commonwealth Women’s Entrepreneurship Summit is the first global event to focus on women in emerging tech sectors. Taking place from 19 to 20 May 2021, it is a two-day online conference focusing on women’s entrepreneurship featuring 50 speakers, 20 talks and 12 panel sessions.

Targeting policy-makers, entrepreneurs, government agencies, entrepreneurship support organisations, funders and educational institutions, it aims to frame and feed into key international meetings including the G7 and CHOGM in June and the G20, UNCTAD and the Global Entrepreneurship Congress later in 2021.

As WTO Director General Ngozi Okonjo-Iweala, said at her recent appointment, "E-commerce will help us to be more inclusive of women" and as the G20 said in December 2020, there is "a missed opportunity – to tackle the gap that needs immediate action, which is the representation of women in emerging fields." The Commonwealth Women’s Entrepreneurship Summit will address that need.

The Summit will focus on how business is being transformed by emerging tech areas, such as fintech, createch, edtech, healthtech, fashiontech, cleantech and agritech, how women from diverse backgrounds are and can be such a key part of this innovation ecosystem and how governments and industry can help to make this happen especially as we build back better in the wake of COVID-19. Three of the partners already host their communities on the WorldLabs innovation ecosystem platform which has is free to join and has grown to 15,000 members during the pandemic, adding 200+ every day and is being leveraged to drive involvement before, during and after the event.

The Summit will feature some of the world’s leading experts on women’s entrepreneurship and fast-growing tech sectors. Details of speakers and sessions can be found on the Summit registration site. The Summit is open to all and free to attend. It will include the launch of the first digital marketplace in the Commonwealth’s history from women for women: the Commonwealth e-marketplace which has successfully run as a pilot.

"As we #choosetochallenge discrimination against women in all walks of life, it is fantastic to see initiatives that give women the chance to chart their own path. The 2021 Commonwealth Women’s Entrepreneurship Summit is one of the ways countries can be a part of that change, by creating a strong business environment for female entrepreneurs. Today, we celebrate their success, and those who challenge the status quo and champion inclusivity."

HE Eric Kneedler, US Chargé d'Affaires and Acting Ambassador to Kenya

"Congratulations to the Commonwealth Women’s Entrepreneurship Summit for convening on the important topic of women’s entrepreneurship.

COVID-19 has disrupted and damaged economies around the world, with women and girls among the hardest hit by the pandemic’s economic toll. The United States recognises the resilience of women to persevere through the crisis but also their potential to drive economic recovery where they live, if given the right tools. We know that communities and families thrive when women are economically empowered, enabling them to re-invest and produce a multiplier effect that spurs economic growth and contributes to global peace and stability. The United States understands that women have the entrepreneurial ideas and passion, but still lack access to markets, capital, training, and digital tools.

We provide grassroots assistance to local women’s groups and community organisations for projects encouraging self-reliance through the African Women’s Entrepreneurship Program (AWEP). The US government empowers women entrepreneurs around the world, because you cannot achieve sustainable economic growth if half of the population is left behind. We applaud summit participants on your work toward building a world in which women entrepreneurs can follow their dreams to success. The United States will continue to strive to empower women and build a more peaceful, inclusive, and prosperous world."

"The Commonwealth’s power and potential comes from its diversity – of people, communities and ideas. As we build back better, we must harness and harvest the imagination and innovation from the billion plus girls and women across our 54 countries. The 1st Commonwealth Women Entrepreneurs Summit aims to supercharge that journey."

"GEN UK is proud to be a foundation partner for the first the Commonwealth Women Entrepreneurs Summit and to support the growth of women in the tech sector throughout the Commonwealth. As part of a global network of over 180 countries, we are excited to bring together a programme of inspiring speakers and thought leaders."

"Bridging gaps across nations, developing constructive partnerships, erasing barriers to market access particularly throughout the African continent for African women entrepreneurs, these are the many challenges that make the Commonwealth Women Entrepreneurs Summit relevant for our network and the largest businesswomen’s program in Africa."