The research design was determined primarily by the intellectual goal of understanding how the intelligence-driven policing management strategies were effective in combating truck hijacking during the period 1998/1999 to 2003/2004. The central underlying question is how management by intelligence-driven policing management strategies was causal in significantly reducing the number of reported truck hijackings.

The methodology used was based on one-on-one interviews with deliberately selected, knowledgeable former senior officers of the South African Police Service (SAPS) who were responsible for combating crime from 1998/1999 to 2003/2004. In addition, an interview with a senior representative of the private security industry who combats truck hijacking was conducted.

Despite the principle of community policing already applied in the police’s new approach, the SAPS was not open to finding a partnership. Marks, Shearing and Wood (2009) believe that the SAPS clung to the notion that they had a monopoly on policing and were therefore unwilling to share the responsibility for security.

The sharp increase in, among others, truck hijackings in the late 1990s forced the SAPS to take extraordinary steps.

In about 1998 the then detective chief, Commissioner Johan de Beer, instructed Martin Naudé, then director (equivalent to the rank of a brigadier) to manage truck hijackings as a special project (De Beer 2018; Schutte 2018). The emphasis was on tactical crime intelligence that could be obtained from crime files and presented as evidence in court.

As the chair of the SAPS’s then National Crime Combating Forum (NCCF) Commissioner André Pruis, a deputy national commissioner of police, prioritised truck hijacking in an official instruction at national level. This, according to Schutte (2018), gave the necessary muscle power to the operations of the truck hijacking project. With that, the fight against truck hijacking was officially registered as Operation Road Runner by about 1998/1999 (the project continued until about 2003). Naudé (2018) argues that collaboration between the SAPS provincial offices and a national, holistic approach was the reason for the success of Operation Road Runner. He referred to it as the ability to “sell” the game plan to the provincial commissioners.

The police role players in the forum were included in a project team and instructed to compile and analyse all crime information about the hijackings. From this, the project team was able to draw up a plan of action.

The reluctance of detectives to exchange information with one another and with crime intelligence officers is often mentioned in the literature. Detectives and crime analysts have different views on crime, and sometimes detectives do not communicate with crime analysts about crime problems unless instructed to do so.

The analysis further indicated that numerous truck hijackings are likely to be committed by the same persons and syndicates (Schutte 2018; De Beer 2018). That the same persons repeatedly hijacked cars and trucks over a long period of time is consistent with the answers of sentenced offenders reported in scientific studies in South Africa.

The SAPS and the private security industry started working together in 1998/1999 on Operation Road Runner, and according to all indications this contributed to a reduction in truck hijackings.

The SAPS project team, as part of the collaboration in partnership with the private industry, discussed the crime information and intelligence with the Road Freight Association. The Road Freight Association undertook to counteract the collusion of employees with hijackers through their freight transport companies. Steps were taken by freight companies to vet staff, rotate routes and truck drivers to impede collusion, and to indicate safe or secure overnight or rest locations on long routes (De Beer 2018).

De Beer (2018) is convinced that the multidisciplinary context in which the project team worked provided detectives and prosecutors with the opportunity to tell crime intelligence members to gather information on specific crimes and to search for outstanding evidence. De Beer (2018) believes that this approach should apply in everyday policing as well.

The cooperation of the multidisciplinary project team resulted in conclusive intelligence and even evidence against the hijackers. The decisive factor was the authoritative management powers of Director Naudé (and later Assistant Commissioner Schutte) to join the role players in a multidisciplinary specialist investigation unit and to authorise and coordinate their intelligence-driven actions. Without it, problem-focused and intelligence-driven policing was impossible.

It was realised that many vehicle hijackings were related and that employees and truck hijackers work together. In addition, there was an integrated national truck hijacking database; a network of reporters; proper, continuous recording of all information; coordinated action; proper and regular feedback to the unit; and recognition of successes or contributions (Schutte 2018; De Beer 2018).

Money from the SAPS Intelligence Unit was used to fund covert and overtime activities and resources for the multidisciplinary specialist unit (Naudé 2018).

De Beer (2018) argues that exceptionally high crime rates cannot be countered by conventional police action. Special projects and task teams that work together and have extra resources are needed for this.

The conclusion is that the successful implementation of intelligence-driven policing is to a large extent dependent on authoritative management. Also, partnerships between the police, the prosecuting authority and the private sector are crucial for crime prevention in the long term.

However, it is difficult to determine scientifically whether there is a causal relationship or only a correlation between the establishment of the specialist truck hijacking project led by Director Naudé and Assistant Commissioner Schutte, the significant decline in truck hijackings since 1998/1999, and the increase in truck hijackings after this specialist unit was closed by 2002. There are, however, experts who believe that there is a causal link between intelligence-driven policing and crime change. Milne (2013:13), for example, argues that there was a correlation between a decline in crime and the implementation of intelligence-driven policing and the automated identification of fingerprints in the UK and San Francisco, and between the establishment of a national DNA database in the UK and Wales.

All experts cited in this article agree, to a greater or lesser extent, that there is a causal relationship between the change in the number of truck hijackings and the intervention of the specialist truck hijacking unit. According to them this is not an accidental correlation. The reason is the close relationship between the implementation and the ending, again, of the specialist project team and the corresponding change in the incidence of truck hijackings. Thus this corresponding decrease and increase are evidence that the change is causal rather than accidental. Further evidence is that this trend in truck hijackings measured over several years showed a significant change after 1998 and after 2004, and that the truck hijacking rate remained constant during the periods outside this time slot. The data indicates that truck hijacking decreased due to the problem-oriented and effective, authoritative management of crime intelligence-driven and coordinated initiatives by all stakeholders.

The reality is that causality in the fight against crime can hardly be determined by quantitative research alone, and that qualitative research must be relied on to a large extent. In this article, the evaluation of the success (or not) of truck hijacking is based mainly on qualitative considerations. 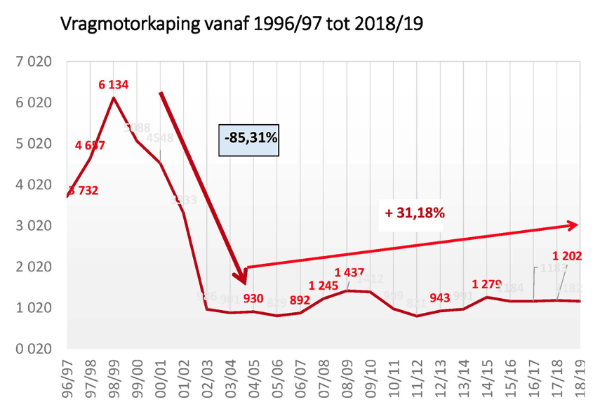 Kanyegirire, A. 2008. Investigating the investigators, A summary of the Khampepe Commission of Inquiry. Pretoria: Institute for Security Studies. https://issafrica.org/01-jun-2008-sacq-24/01-jun-2008-investigating-the-investigators-a-summary-of-the-khampepe-commission-of-inquiry-andrew-kanyegirire (17 Oktober 2019 geraadpleeg).

Marks, M., C. Shearing en J. Wood. 2009. Who should the police be? Finding a new narrative for community policing in South Africa. Police Practice and Research, 10:145–55.

Nwankwo, P.O. 2010. Criminal justice in the pre-colonial, colonial, and post-colonial eras. An application of the colonial model to changes in the severity of punishment in the Nigerian Law. Lanham: University Press of America.

—. 2010. Home invasion: Robbers disclose what you should know. Kaapstad: Tafelberg.