The state requires of teachers to learn from one another, but does not provide a method to assess the effectiveness of the learning that happens when teachers learn from one another. In this paper I am using the concept of networked learning to refer to the learning that happens while teachers establish relations to learn from their colleagues. I have coined the term personal development network to refer the set of relations teachers establish get access to information, knowledge, advice, concrete resources, support and guidance. These relations are not built in isolation; therefore, teachers are woven into whole development networks that can provide access to the practice-based social capital.

Practice-based social capital consists of the knowledge and resources shared in working environments. If relations are considered as a form of capital, it can be assumed that teachers will work effectively as soon as they have established relations with colleagues. It can also be assumed that a lack of relations can impact negatively on a teacher’s work. Social Network Analysis (SNA) provides a variety of methods that can be used to study the impact of relations on a teacher’s work. For the purpose of this paper, a frequent study of the development network was regarded as the most effective method.

SNA is characterised by a basic structural intuition, systematic collection of member data to investigate social patterns, and visualisation of data or the use of mathematical calculations to investigate characteristics of social patterns in order to explain social phenomena. For the purpose of this paper, visualisation of data was preferred above mathematical calculations since sociograms of the evolving development network provided an effective method to communicate the impact of relations on teachers’ work. Therefore, the research was guided by the following question: “How can sociograms be analysed to understand the effectiveness of the networked learning of a group of school-based mathematics teachers?”

The research was based on the assumption that development networks consist of formal (hierarchical structure) and informal relations. These social structures are stable at any specific moment in time, therefore snapshots can be taken to study the efficiency of networked learning over a period of time. I have argued that networked learning can be regarded as effective if the formal relations realise reciprocally in practice since it would allow social resources to flow freely between hierarchical levels. A study of sociograms can provide an easy method to identify missing formal relations, but it can also provide an easy method to explain and predict the impact of missing relations on the work of individual teachers, groups and the community of mathematics teachers. This information can be used to design and develop remedial activities to improve the quality of personal development networks.

Development networks evolve as soon as new relations are established or existing relations dissolve; therefore consecutive snapshots of the development network could provide information with regard to the efficiency of both networked learning and the remedial activities. The reliability of network data could be improved if the teachers used a social networking site to learn from one another.

Social networking sites can support networked learning. These tools develop into Learning 2.0 tools when used to connect to others, share content, get access to shared content and collaborate with one another. One of the benefits of social networking sites is that the precise content of relations is automatically stored. A social networking site could be developed during the course of the study if the school has not yet integrated a social networking site. The voice of the participants could improve the research, therefore, a multi-phase mixed-methods framework was designed to frame the empirical investigation.

The four largest groups of subject teachers of a secondary school in Gauteng were invited to participate in the research. The mathematics subject teachers were purposefully sampled, since the teachers used technology in their classrooms and internet access was available. They have not yet integrated a social networking site, but it was assumed that their knowledge and use of technology could contribute to the development of an effective social networking site.

During the design phase, a social networking site was designed to serve as meeting place for the teachers. The head of department requested the teachers to use this tool to share information, knowledge, advice, and concrete resources and to support and guide one another, as the state requires in several policy documents. The social networking site was integrated during the implementation phase and developed within the first weeks into a Learning 2.0 tool. Several opportunities for networked learning were created, but the teachers could not be forced to participate. During the analysis phase, network data were collected to investigate the efficiency of the networked learning that happened online. The efficiency of networked learning could be questioned since many of the formal relations were not established online.

During the monitoring phase the first two sociograms were compared to study the efficiency of networked learning over time. The results were not discussed, but the teachers were again requested to use the sociogram to assess and improve the quality of their personal development networks. More opportunities for networked learning were provided during the development phase, but many of the formal relations were not build online. The efficiency of networked learning was questioned during the second analysis phase as well. A comparison of the three sociograms during the second monitoring phase revealed the impact of ineffective networked learning over a period of time and the resulting work overload of the head of department. The grade 8 coordinator never shared any information with the grade 8 teachers, therefore the four teachers sustained their informal relation with the head of department to get access to information needed to do their work.

The analysis of consecutive sociograms of the development network provided a simple, easy method to study the effectiveness of networked learning over a period of six months. During the process the assessment, evaluation, diagnostic, predictive, remedial and monitoring value of SNA were identified and a facilitation and a management value were identified. This research has implications for the implementation of policy with regard to the establishment of school-based professional learning communities.

According to policy regarding the Continuous Professional Teacher Development System, which was implemented with effect from 2016, teachers have to participate in professional development activities designed and developed to improve their work. The policy also requires that teachers who do not participate must be reported to the South African Council for Educators (SACE). This study revealed the impact of ineffective networked learning on the work of individual teachers, but also on the work of their colleagues, groups and the community of mathematics teachers. Some teachers did not participate in remedial activities, therefore it is recommended that this method be used quarterly to collect relevant, reliable information to substantiate such a complaint. 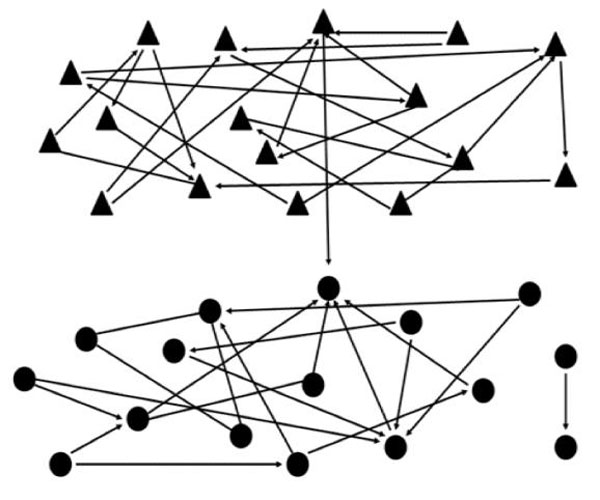 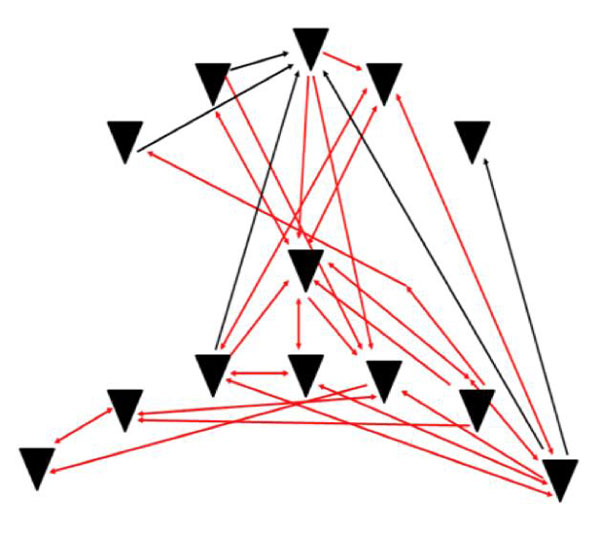 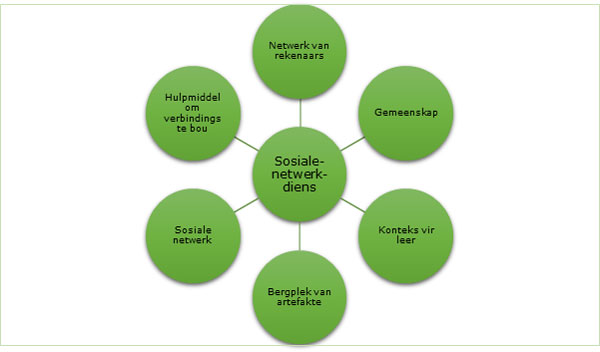 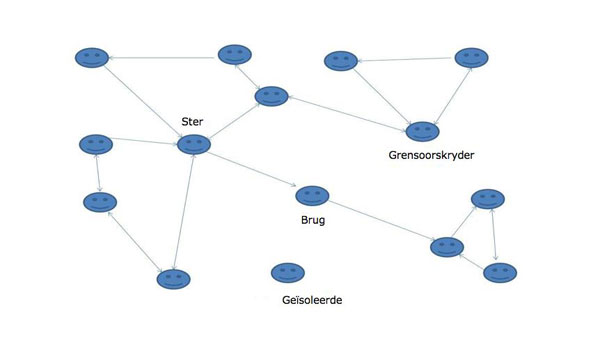 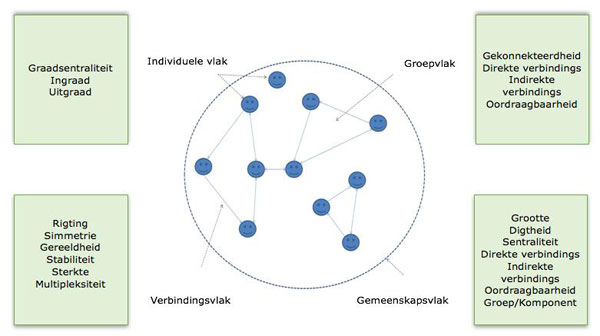 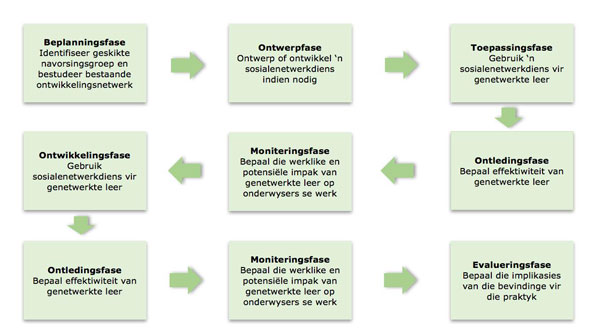 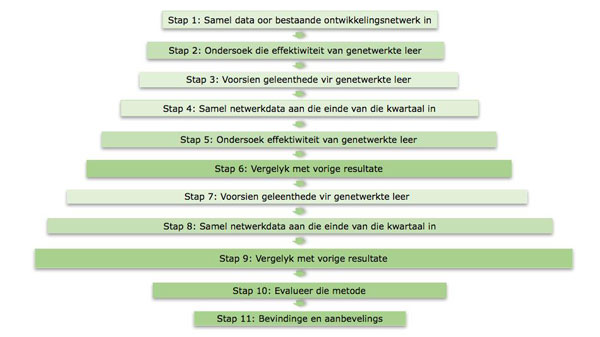 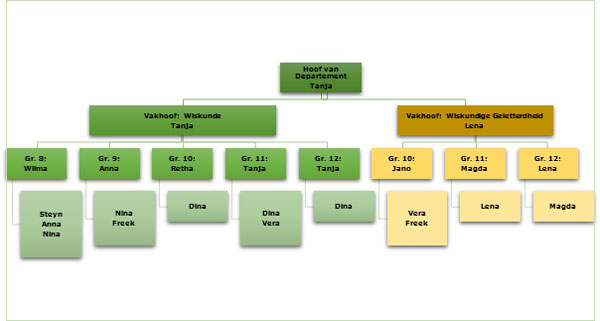 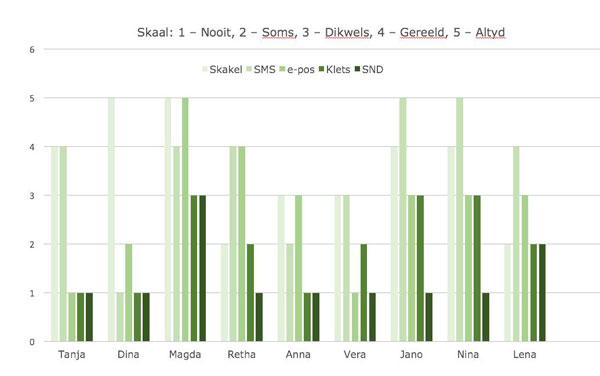 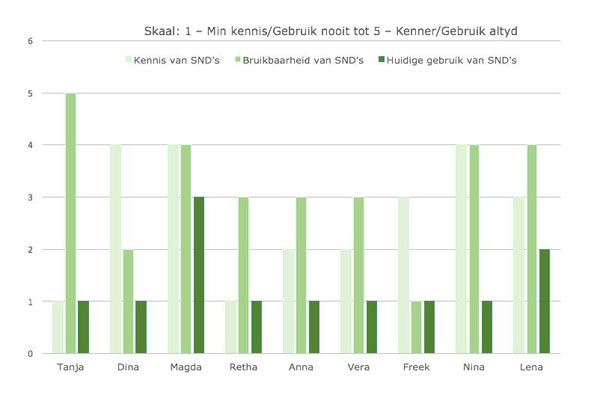 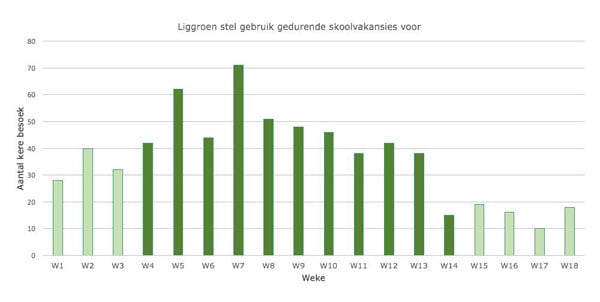 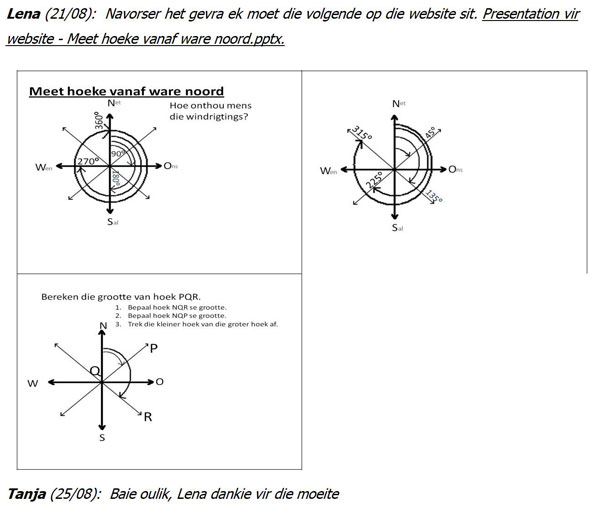 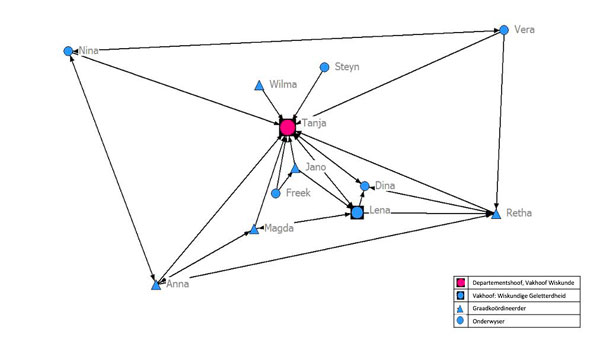 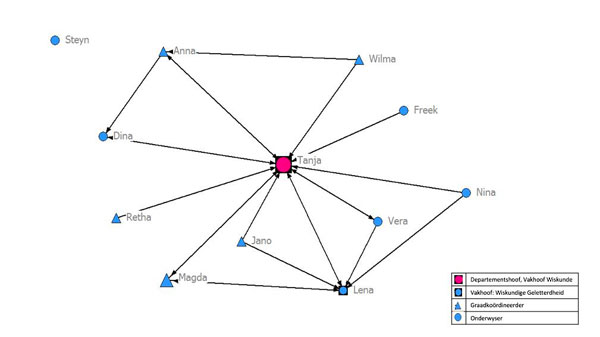 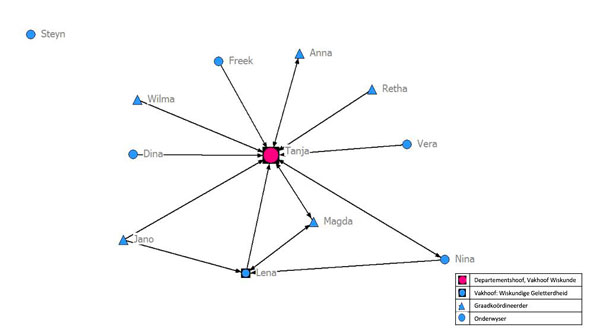 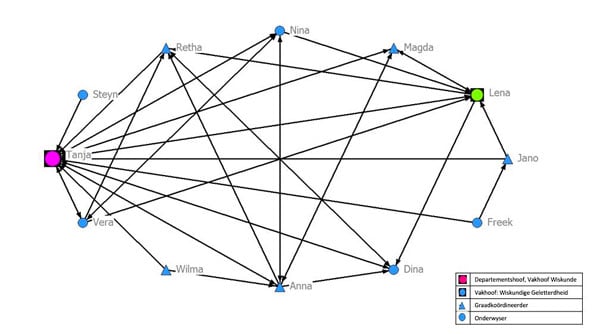 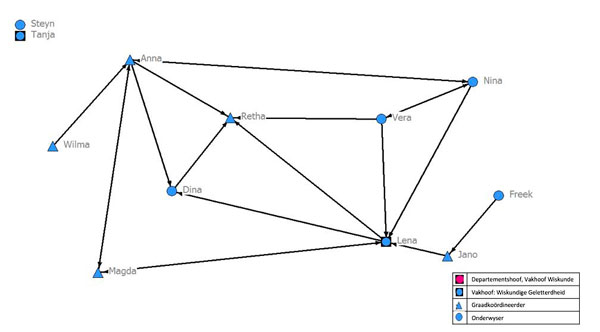 Bryman, A. 2006. Integrating quantitative and qualitative research: How is it done? Qualitative Research, 6(1):97–13.

Freeman, L. 2004. The development of social network analysis: A study in the sociology of science. North Charleston: Booksurge, LLC.

Hancock, G. 2008. School leadership: A study investigating how emergent formal school leaders understand and collaborate with informal leaders to develop a better understanding of the terrain they are entering. University of Pennsylvania. http://repository.upenn.edu/dissertations/AAI3310474 (16 Maart 2015 geraadpleeg).

Hawe, P. en L. Ghali. 2008. Use of social network analysis to map the relationships of staff and teachers at school. Health Education Research, 23(1):62–9.

Moreno, J.L. 1934. Who shall survive? A new approach to the problem of human interrelatedness. Washington: Nervous and Mental Disease Publishing Company.

Richardson, J. (red.). 1986. Handbook of theory and research for the Sociology of Education. New York: Greenwood.

Senekal, B. 2013 The use of network theory in a system-theoretical approach to Afrikaans literature: A theory overview. Tydskrif vir Geesteswetenskappe, 53(4). http://www.scielo.org.za/pdf/tvg/v53n4/13.pdf (2 November 2016 geraadpleeg).