Educators as victims of learner violence in South African schools

Learner-on-educator violence (LOEV)1 has become a common phenomenon in South African schools. Despite this, local research into school-related violence focuses more on educator-on-learner occurrences and the causes thereof than on providing solutions to the aforementioned problem. A very limited number of studies have been carried out in the area of LOEV in South African schools, although several researchers have devoted their time to issues pertaining to schools-based violence in general. Since policymakers and research funders have largely overlooked violence against educators, insufficient information is available about the consequences thereof. By contrast, although the literature is rich in educator development programmes, it does not capture effective counterstrategies to negate the impact that LOEV has, or the escalation in violent incidents against educators at schools.

According to previous studies, LOEV is a sub-category of school violence, since it manifests itself through learners acting violently towards teachers. Such actions may have various consequences, hence the literature describes it as one result of aggressive behaviour, be it physical or emotional (or both), where the intention is to harm or cause discomfort to educators through bullying, hitting, insulting, raping or even killing them.

An educator’s role requires him/her to uphold discipline and deal with learner distractions while encouraging security and safety amongst all in the school, in the interest of the learners and society at large. Thus, the safety of educators in schools is a multifaceted concept, understood internationally at different levels, depending on a variety of personal, environmental and interacting influences which differ from one country to the next.

A recent study by Grobler (2018) on violence in South African schools reported that the majority of educators have experienced violence at school in one form or another before. This study is supported by an earlier report by Sibisi (2016) on the effects of school violence which found that instances of threats of violence, assault, sexual assault and robbery were nationally documented as escalating.

Against this background, the purpose of the current research was to answer the following research question: How can violence against educators in South African schools be countered? More specifically, the research had the following objectives, namely to

This study was carried out in the Gert Sibande District of the Mpumalanga province of South Africa. I have identified four purposefully and systematically selected schools after obtaining permission from the Department of Education (DoE) and my university to conduct this study. In the pre-selection meetings, I disclosed to each principal the intended aims and objectives of the study, and also appraised the appropriateness of their schools as suitable research sites for the study. From each of the four schools, the principal and four qualified educators were identified as participants (n = 20) for the study.

The COVID-19 pandemic has caused a great deal of upset for researchers, compelling them to learn how to work more effectively at a distance, and has also affected the means by which research may be carried out proficiently. For example, some researchers opted to suspend data collection or to redesign their data-collection strategies to take into consideration their countries’ national COVID-19 protocols. Most qualitative research methodologies are dependent on face-to-face interaction for data collection through interviews, focus groups and fieldwork. However, there are numerous techniques researchers could adopt, for example finding qualitative data online, virtual face-to-face interviews via Zoom, or using Microsoft Teams or Skype.

In this study, my quest to understand the participants’ subjective viewpoints of their daily routine and lived experiences with the phenomenon in question guided me in respect of the selection of a data-collection technique, namely virtual semi-structured interviews via Microsoft Teams. Document analysis and field notes were used as supplementary data-collection methods to determine how participants understood and attached meaning to the experiences that influenced their responses to LOEV in their workplace. Emerging from the virtual face-to-face interview discussions as the first inception of the empirical investigation, participants’ responses were captured and views identified and grouped according to their dominant categories and their subsequent themes.

The findings revealed that educators battle to manage and control learner-on-educator violence in schools. Notably, grounded theory facilitated the exploration of the strategies educators adopt to cope with and manage violence against them. These unique sets of coping skills embedded in the three-step grounded theory model could be used to counter instances of violence against educators, not only in South Africa, but also worldwide. The key findings were captured as follows:

The findings of the study have assisted me in developing a proposed model to address the LOEV impasse. Educators’ classroom interaction is of a physical, cultural and social nature. To explore the ecology of the contexts of the teaching and learning environment, important elements derived from the study were incorporated as part of the three-step grounded theory model.

Although I have followed all the basic requirements of a grounded theory method, I do not claim that the study’s conclusions are the final word: Despite any shortcomings, the intentions of the study were credibly, sensibly and sincerely undertaken. Finally, this study served as an archetype that could be used in the quest to find solutions to violence against educators at schools, and to school violence in general, while the findings of this study may prove valuable for provincial education managers, circuit managers, school principals, educators at schools, and any other persons or organisations studying the concept of school violence. 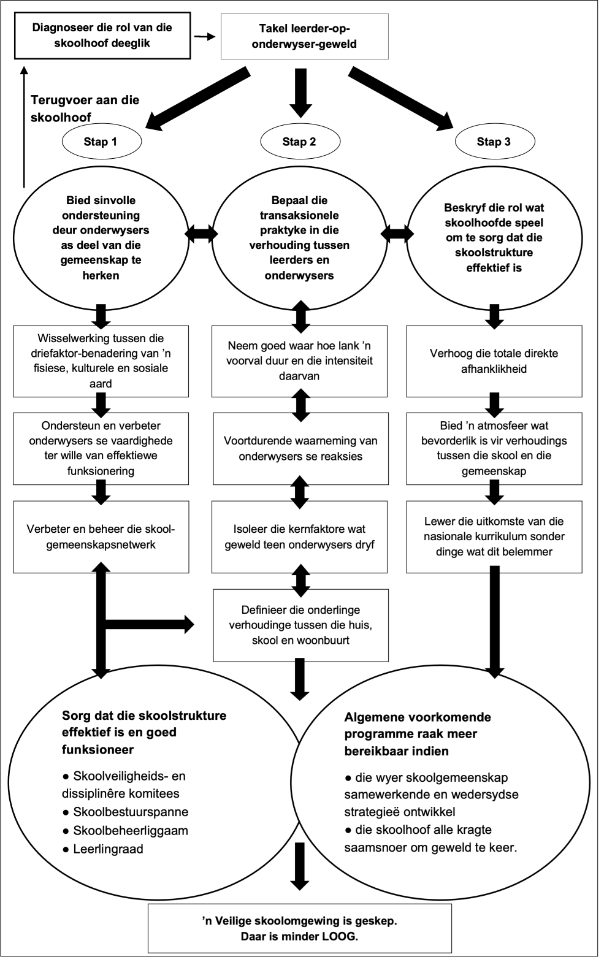 Riaan, G. 2019. Violence in SA’s schools is worse than you think, and spanking is part of the problem. News24, 7 Junie. https://www.news24.com/SouthAfrica/News/violence-in-sas-schools-is-worse-than-you-think-and-spanking-is-part-of-the-problem-20190607 (17 Junie 2021 geraadpleeg).

Williams, W. 2020. Community violence and the impact it has on childhood learning. PhD-proefskrif, Saint Mary’s College of California.

1 The acronym LOEV has been created for this article and refers to learner-on-educator violence.