An agricultural magazine as “social barometer”: The Afrikaans magazine Landbouweekblad as an indicator of agricultural developments over one hundred years

This article presents an overview of the hundred years of the magazine Landbouweekblad, which was founded in May 1919 and thus celebrates its centenary this year. The article is presented from a (media-) historical and magazine studies point of departure – the latter a subfield that is particularly underemphasised in South African media and journalism studies. The concept of magazines as social barometers of their time, as espoused by Querusio (2013) and Johnson and Prijatel (2007) as pre-eminent magazine studies scholars, is presented together with the theoretical point of departure of the political economy of the media as an appropriate approach. The origin and development of this particular agricultural magazine are recorded against the goals set by the publication itself in response to the socio-economic political realities of South Africa when it was established in 1919, and as it developed over the next ten decades. It can indeed be understood in terms of the metaphor of magazines as being social barometers of their time, as presented within the field of magazine studies.

Following that discussion, this particular magazine’s development, based on idealistic-ideological as well as market-driven ideals, is presented. These could also be described as both a service objective and a profit objective of its founding company, Naspers (Rabe 2015:12). The fact that the magazine was supposed to have been closed down, but never was, is proof of the latter. The decision was never executed, with the result that the magazine could continue “for the time being” – something that is probably unique in the history of a magazine. No minutes could since be found in which the decision to discontinue the magazine was retracted (Smith and Du Preez 2008:2), which means it is still being published “provisionally” to this day.

The issue of the development of Afrikaans is also briefly highlighted, as the language had not been officially recognised when the magazine was founded in 1919.

As stated, both media history and the field of magazine studies are regarded as foundational for this article. The former approach as a field of study was argued extensively in Rabe (2014). For the latter, magazine studies, the strong link between a magazine and its community, and the concept of the magazine as a “social barometer”, “measuring” the state of that society, is emphasised by Johnson and Prijatel (2007:90). Although magazines are “dynamic members” of a community, change can happen only when the magazine’s “messages” are heard in that community. One could, therefore, ask what the phenomena were that Landbouweekblad “measured” in the community it served between 1919 and 2019, and how it recorded those messages as a response to those readings of the “ecology” in which it found itself. For this article, as a media-historical project, a qualitative research method was followed whereby the researcher used primary and secondary sources for data collection in order to build a “critical contextual link” between the past and present (Lundy 2008:395). By doing so, the researcher tries to present Landbouweekblad by highlighting only a few aspects of its history over one century. The author supports Lundy (2008:396), who emphasises that the historical method is more than the collection of data and the resulting report, and that historical research indeed is considered to be one of the most common forms of archival research. Or, as Rubin, Rubin and Piele (2005:221) write, to “accurately reflect what has happened and to clarify the relationship between social institutions, conditions, people, and events”. This study, although not a content analysis of Landbouweekblad, therefore attempts to show how the magazine tried to accurately report (or “measure”) what the relationships were between “social institutions, conditions, people and events”, and thus tries to provide “theoretical and holistic conclusions about historical events and eras”.

As it is impossible to reproduce every aspect of history, media historians merely try to collect, merge and interpret “fragments” (Scannell 2002:201). With this reality of merely being able to present “fragments”, it is important to sketch briefly the political-economic situation of the target market that Landbouweekblad served. White Afrikaners were politically, economically, financially and culturally on their knees after the South African War, which increased the impetus for Afrikaner Nationalism. The post-war situation, also that of the World War I, led to the fact that by 1936, 50% of one million Afrikaners were urbanised (Morris 2012:20). Few of these first-generation urban Afrikaners, also called “poor whites”, could compete for jobs in an urban economy, because they had neither the training nor the experience for city professions. According to Giliomee (2012:300) a study showed that 44 Afrikaners from a class of 100 school beginners in 1933 would leave school without having completed standard 6 (grade 8 in today’s terms). Only eight would pass matric, and fewer than three would go to university. Afrikaners’ per capita income was half of that of English speakers. Only a few “Afrikaner” companies were established at that time (Morris 2012:20). They were Naspers (today Media24, as a subsidiary of Naspers, the owner of Landbouweekblad), Santam, Sanlam and Volkskas. By the end of the 1930s, the Afrikaner share in mining was 1%, 3% in manufacturing, 5% in the financial sector and 8% in trade and industry. According to Morris, only 3% of professional positions were filled by Afrikaners in 1939. During all these decades, as a social barometer Landbouweekblad recorded changes in technology, politics and modernisation. For instance, it called the post-World War II technological changes in agricultural mechanisation a “revolution”. This is but one example of how the magazine developed over its ten decades, measuring the ecology within which it existed.

The current uncertainty in the agricultural sector is reflected in the statistical forecast relating to commercial farmers in South Africa (which, in turn, undoubtedly impacts on food security, and thus stability) in the country. The number of South African farmers declined from 61 000 in 2006 to 46 000 in 2012, and 38 000 in 2015 (Gericke 2018). The forecast is that they will number only 8 000 by 2030. The unstable political climate and land reform crisis, not only in agriculture, but in South Africa as a whole, stem from the fact that no action has been taken in terms of the critical land redistribution since democratisation in 1994 (Joubert 2012:581–99). South Africa’s unemployment rate in 2010 was between 24% and 42%, depending on how it was measured. Unrealistic goals that led to the current political tension were that by 2014, 30% of arable agricultural land already had to black-owned. According to Joubert, this did not happen, as implementation was severely “hampered by corruption”. As a result, and amid massive uncertainties and fears, the magazine, as a “social barometer”, together with Agri SA, hosted a land reform conference in August 2018 which was described as a “turning point in the whole land debate” (Landbouweekblad 2018:22). The magazine itself thus responded to various “climatic” conditions amid upheavals in its own industry’s ecology by diversifying and morphing into different products, not only in print, but also in digital, online form as well as in other media, such as a TV programme. One can, therefore, conclude that the magazine has remained relevant over its ten decades.

It appears that “adaptability” is the magic word that characterised Landbouweekblad’s longevity (Verster 2011). Indeed, the magazine, along with its target market, has “become even more professional with a scientific approach in its specialisation, namely agricultural journalism, with more expert attention to issues such as production, farm management and marketing” (Spies 1992a:377). 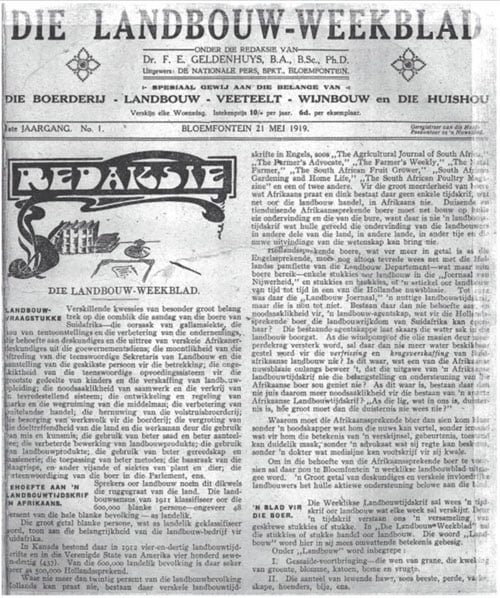 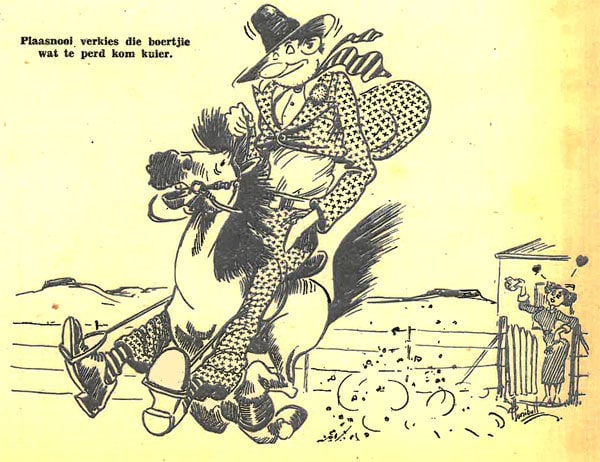 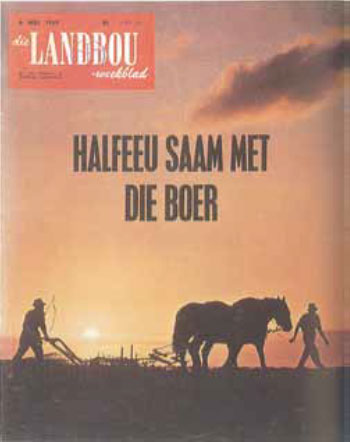 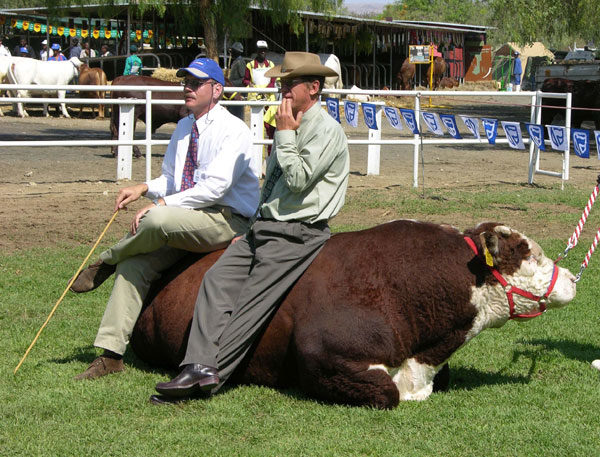 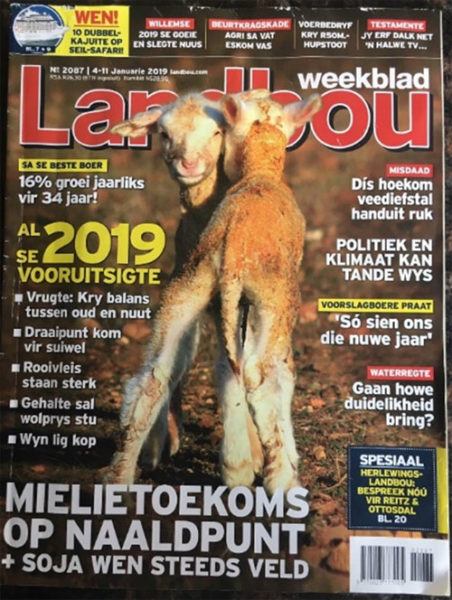 Giliomee, H. 2003. The Afrikaners. Biography of a people. Kaapstad: Tafelberg.

―. 2015. Who’s afraid of a black bourgeoisie? Consumer magazines for black South Africans as an apparatus of change. Journal of Consumer Culture, 3(2):191–216.

Mouton, J. 2001. How to succeed in your master’s or doctoral studies. A South African guide and resource book. Pretoria: Van Schaik.

―. 2014. Reflections on writing about writing media history, or, the mapping of certain paradigms and certain philosophies in researching a media historiographical project. Historia,59(2):10–27.