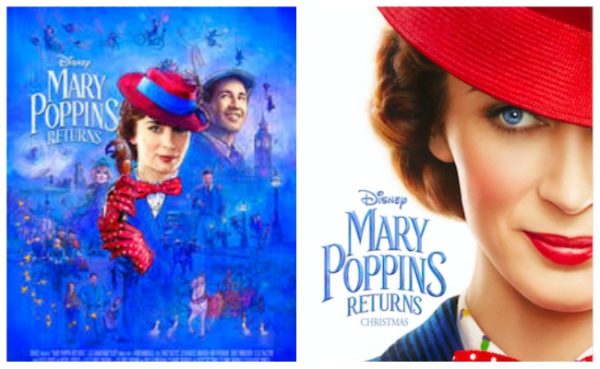 I do not have the words to describe Mary Poppins Returns. Still, I must attempt an analysis of this film, if only to encourage others to experience the complete joy it brings. Here goes.

It is a magical mischievous musical wonderland. It is the antithesis of all things Hollywood, all things shiny and false. It is pure and free and otherworldly.

I chose not to re-watch the original as I needed to be sure that the new version could stand on its own legs. (I saw the original in the early 80's, and much has happened to spoil my memory of specific events within the narrative, but not of the sense of the film.) There is the tipping of the hat to the original (watch out for Dick van Dyke), but one does not need to fully grasp the importance of it, to absolutely fall in love with Mary Poppins Returns. In conclusion, not only does it stand on its own legs, it dances.

Also, I purposefully decided not to compare Emily Blunt to Julie Andrews. How can one compare Emily’s performance to a performance that has reached cult status over a period of 54 years? Let’s give Emily a fighting chance. TBH, I thought she was marvellous in this role. Her Mary is restrained, oh, so British, but with a wonderful twinkle in her eye and bounce in her step. Well done for taking on this gargantuan task, Emily, and the criticism and comparisons that will no doubt follow.

The magical world Mary transports the children to every now and again, is all-encompassing. Even as a slightly grumpy adult who does not have a fondness for musicals (alright, I will admit to laughing during Evita), I found myself tapping my foot and sporting a rather silly grin for the whole two hours. That is apart from the scenes where I cried. (I blame my distress on Ben Whishaw’s terribly poignant performance as a brittle Michael. He is the heart of the film, more so than Mary Poppins herself.) The delightfully clever animation, the Sherman-brothers-type music, the dancing with the streetlamps, the general good cheer, and the charming lyrics, just overcomes you. Don’t fight it. Become a child again, if only for two hours.

Yes, it might have been a tad long, and yes, the great Emily Blunt, as the lead, should have had more screen time, but who cares? The ensemble cast delivers and the combination of the real and the animated is seamless to the point of being baffling. The most important thing is the film’s beating heart. It will give you all the feels.