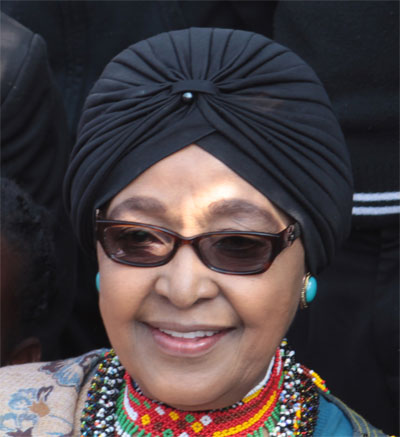 What is this furtive mourning I am doing? Why do I find myself actually spending my time defending my right to eulogise a woman whom I have spent the greater part of five years researching and writing and speaking about. Because this woman is Winnie Madikizela-Mandela, that’s why. And my admiration for her evolved as I grew to know her many facets, through her words.

Social media assaults me. On Facebook, I see someone post a well recognised picture of a young, newly married Winnie, the coy one, with that slightly seductive smile spreading beyond the pixels that a picture can occupy. They caption it: “Rest in Peace Mama.” The comments below are generically RIP … But then, there is a reply: “Take one for Stompie.”

And the page erupts with a bipolar wave, where there is little on it akin to eulogies or respect for the dead. I cannot help myself; I plough through Twitter, and find the same contradictions there. But, at some point as the night wears on, I stop myself, and simply breathe in the fact that a strong, wonderful human being, a woman, is no more. It is as simple as that.

Winnie Mandela, like her father’s namesake Columbus, went looking for a place, and instead found another. She was twenty-three years old when she married one of the most powerful and controversial men in South Africa, the late Nelson Mandela. A question now hangs in the air – was Winnie even aware of what she was getting herself into, or was just a naïve beauty in love with a debonair older man?

I believe Winnie was both. Winnie was, and always would remain, two things. This dichotomy began at an early age, when Winnie recalled that her parents had wanted a boy child, and she did everything she could to be as tomboyish as possible to please them. In an amalgam of making slings and climbing trees, there was also a soft girl who brought home the poor and hungry and cared for them with a nurturing hand.

The making of Winnie Mandela began in a world filled with contrasts. The nurturer archetype would always do battle with the warrior. Each had its day, and each day was interchangeable. Winnie had a powerful, clever mind well before she even realised she did. Her insistence on staying in the Baragwanath Hospital (now Chris Hani Baragwanath) as a social worker, despite being offered a scholarship to study in the United States, proved that embers of social conscience were slowly burning inside her. They would be later fanned by her marriage to both the African National Congress and Nelson Mandela, but Winnie had proved even at her tender age that she had mettle.

Perhaps, this mettle was her undoing. This fierce and abiding spirit to “play equal with the boys” was the reason why the one Winnie inside her would suffer at the hands of the other. A wife with the dreams of romantic youth would have to be sacrificed on the altar of the greater struggle. Had Winnie been a lesser woman, she would have wilted, craving for the halcyon days of a honeymoon. But, she stepped up. She idolised Nelson beyond the love of a wife for a husband. She wanted him to admire her, to see her as a partner in his academic pursuits of democracy.

She wanted to join him in his fight and not just produce babies out of her womb and bread out of her oven. But then, she craved adoration as a woman as well.

At the age when girls nowadays are grappling over which cell phone colour is best to match lipstick, Winnie Mandela was being harassed daily, her home raided, her belongings destroyed. And her husband was far away in prison. She craved his touch and warmth. In the letters to him, in phrases that escaped the black ink of censors, the passion and longing for a man shine. Nelson, on the other hand, was enduring a hardening of his own psyche, urging her in letters to read and educate herself about the struggle. She swung between yearning and learning. A horrible place to be. A moment where a man and a woman are lost in translation.

In her earlier letters, she appeals to his emotions by talking of the electricity of just holding a piece of paper which his hand has touched. He slowly begins to respond in letters that are few and far between, telling her how proud he is of her, and signing them simply, “Love to the girls from me.”

Somewhere in the many years of a marriage that had to be continuously consummated by ink on paper, there came a fracture in the mind of a wife. Not a freedom fighter or a revolutionary, but merely a woman aching to be loved. She stops regaling him with love notes, and now matches his tone with that of the political machine that she has morphed into. She accepts his congratulatory note when she is released from the horrors of solitary confinement. She sees now that one simple photograph of her standing outside her home in Vilakazi Street, Soweto, with her fist stuck in the air wields more active power over the people on the ground who are quickly forgetting the men in jail. They are the myths that the people cannot see. She is the reality that can make the world see.

Winnie Mandela’s role as a fierce fighter against the apartheid regime has been and for years to come will be talked about. Her eulogies will include the good, the bad and the ugly. I have simply made a choice, and my choice is based on the lens of my own subjectivity. I believe that Winnie Mandela was a heartbroken woman, and within the loneliness and splintering of her own identity, she fought wilder and harder because, not only had the apartheid regime deprived the black people of their rights and dignity, but she saw it as having deprived her of her life as a wife and a mother as well.

One of her biggest laments was being compared to the quiet, educated grace of Albertina Sisulu, and how academically Albertina had endured the absence of her husband. Winnie was not a woman to endure quietly and wait for a day to come. She was a woman who made the day happen. She was that type of woman. The woman your mother warns you never to become, but applauds you when you defiantly do. She was a woman who believed in speaking her mind, and even till the latter years, she always did. She was a vociferous voice who spoke out about the state of South Africa as it currently stands. She expressed her heartbreak at how the legacy of the ANC had been sold.

In my thoughts on Winnie Mandela, I have refused deliberately to think about her controversies. These things have been dissected by the world far too many times. I simply wish to remember Mama Winnie in the frame of my own reference; I will always look at that curving hand, writing letters by candlelight – of love in a time of burning.