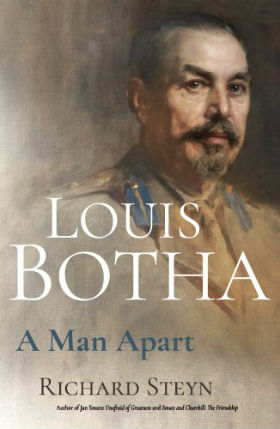 Louis Botha (1862–1919) was the first head of government of a geographically united South Africa, which was, by a long stretch, not a politically united South Africa. As an object of historical study, Botha does not enjoy a lot of attention. One is only able to take stock of his life if one’s approach to the study of history has ventured past motives such as nation-building and patriotism. In A man apart, this is what happens, as author Richard Steyn makes it clear right from the start that his role is not to justify or condemn, but to explain the past. Botha, whose passing will have been exactly a century ago in the year 2019, is a figure of whom it is correctly noted that “little is known by a modern audience” (291). Much like his close friend and contemporary, Jan Smuts (1870–1950), Botha is not a figure who was revered, by either Afrikaner nationalism or African nationalists. It is for this reason that Botha became a largely forgotten figure of South African history.

To make the life of Louis Botha relevant to modern readers is, therefore, no easy task. While it makes sense to study a figure who led the first geographically united South Africa, it must always be borne in mind that it was the Union government that refused franchise for the majority of South Africans, and confined black South Africans to 8% of the country, by means of the dreaded 1913 Land Act. Botha himself was also a man of his times, who believed in the notion of white supremacy. Yet, it is precisely for all the aforementioned reasons that a study of his life is valuable. Richard Steyn has previously produced two history books about the life of Jan Smuts, one examining the friendship between Smuts and Winston Churchill (1874–1965), and both books are good companions to his latest book. However, with A man apart, I do feel that Steyn has reached new heights as a historian.

Having grown up under the British crown in what is today KwaZulu-Natal, Botha was exposed to English-speaking South Africans from a young age. While he rose to prominence as an Afrikaner nationalist fighting against British imperialism, he was never opposed to individuals, but rather to their ideas. Botha’s leadership skills were particularly revealed for the first time while he was fighting in the South African War (1899–1902). The war makes for a very large part of the book, and this could be said to be a bit tedious, considering the amount of literature already published on the war. However, it is critical to understand the South African War, as it would shape history in the rest of the 20th century. Botha died only 17 years after this war. He did not grow to be a very old man, passing on at the age of 57. The key moments in his life covered in this book, apart from the war, are his role in the colony of the Transvaal after the war, the negotiations for the establishment of the Union of South Africa, his serving as prime minister of the first Union government, and, at the ultimate end, his role in the First World War (1914–1918)1, which included the repression of a short but tragic civil war in South Africa – known today as the Rebellion of 1914 – as well as the invasion of German-controlled South West Africa (today Namibia). Botha was also instrumental in the negotiations following the First World War, pleading together with Smuts for better terms for Germany, in order to avoid future conflict. As history would prove, their attempts were largely unsuccessful, to the detriment of all humankind.

The resentment that Botha experienced in later life towards himself, and the feeling of being rejected by his own countrymen, left a painful mark on the last years of his life. The rise of Hertzogism (support for the conservative general, JBM Hertzog2) destroyed Botha’s dream of a united South Africa, where British and Afrikaners would work together as one united nation. These divisions which remained between Hertzog and Botha, and also between former president MT Steyn and Botha, can, in fact, be traced back to the South African War, where the leaders of the two Boer republics, the Free State and the South African Republic (later the Transvaal), had had great difficulty in agreeing on whether to continue the war or not, with the Free State leaders earning the title of “bittereinders” (people fighting till the bitter end).

While A man apart cannot be said to be fresh, new, groundbreaking research, this is not the purpose of this book. The bulk of the research for this book is from secondary sources, in particular the many books which have been written about this era, in which Botha played a prominent role. In addition to the books used, there are also some academic articles, some newspaper articles, as well as some archival material which was used for the research. The book also provides colourless photographs, maps and cartoons, as well as an index. There are no footnotes, but a set of endnotes. The choice of endnotes over footnotes always has the advantage of improving the readability of a text, while still providing a layer of scholarship and credibility. Steyn succeeds in painting a nuanced picture of the former prime minister. The book is by no means a hero-worshipping publication, and the oppression of black South Africans by the Union government forms an important part of the book. It is a fresh appraisal of Botha, but even this bold attempt will, I believe, not stir any long-term interest in the former prime minister.

1At the time of the First World War, and for many years thereafter, it was known as The Great War.