Approaches to curriculum design of the South African school curricula: a critical perspective on the curricula for Afrikaans (Home Language)

During the past 25 years, the South African national school curricula went through changes and revisions with regard to approaches to curriculum design and methodologies. Changes in school curricula are taking place across the world to meet international and national demands, to meet social needs, and to comply with socio-political, socio-economic and technological changes. School curricula are not neutral, seeing that they develop in certain socio-political and socio-economic periods. Approaches to curriculum design contributed to the South African school curricula going through various changes, revisions and repackaging after 1994. These changes were political, symbolic, educational and socio-communal, and are reflected in the various school curricula. The question thus arises whether these changes and revisions are educationally and socially accountable, represent an improvement within the South African school system, and in particular whether they have also improved as far Afrikaans (Home Language) is concerned.

In the political dispensation during the post-apartheid period South Africa needed a school curriculum which gave learners equal and fair education opportunities, and consequently Curriculum 2005 was developed. Curriculum 2005 was influenced in curriculum design by process approaches. This outcomes-based curriculum was in strong contrast with the previous content-based syllabi with regard to ideology, content, methodology and assessment. The assumption with Curriculum 2005 was that learners should be participants in the discovery of knowledge and that the teachers should be facilitators of learning and curriculators of learning content. The approach to curriculum design on which Curriculum 2005 is built was accepted timeously and precipitately in South Africa, a developing country, as a result of the models implemented in developed countries. The outcomes-based approach to teaching of Curriculum 2005 failed the diverse South African community and the recognition of the unsuccessful implementation thereof led to the establishment of the National Curriculum Statement (NCS) in 2002. The NCS followed a hybrid approach to curriculum design which integrated product approaches and process approaches. This was an attempt to make the South African school curriculum more user-friendly for teachers. However, teachers were still hesitant to act as curriculators. A task team appointed by die Minister of Education found that the NCS was still too general and provided unsatisfactory support to teachers.

According to curriculum experts it would have been more educationally and socially accountable if there had been a gradual shift from a traditional to a transitional to a transformational curriculum design. The South African education authorities supported "revolutionary" education changes rather than gradual "evolutionary" changes during the democratisation of South Africa, and it should be judged in that light. Consequently, the South African school curricula were changed and revised more than those of other countries. The current school curriculum, CAPS, for Afrikaans (Home Language) shows clear characteristics of product approaches to curriculum design, such as prescription, uniformity, set calendar times, examination coaching, strict regulation, and curriculum monitoring. This product approach indicates a return to the approaches to curriculum design which influenced the 1985–1995 syllabi (Afrikaans, First Language). In product approaches to curriculum design teachers are, according to theory, only technicians following curriculum prescriptions. Firstly, it can cause a decline and decrease in teachers' as well as students' creativity, imagination and innovation. Secondly, in the current South African school system the possibility exists that "deprofessionalisation" of teachers might take place. The ideal is rather for teachers to interpret, reinterpret, transform, adapt, add to and remove from the school curriculum, and to provide learners with learning experiences which are significant within a certain timeframe.

According to researchers, product approaches to curriculum design do not meet the demands of the 21st century, seeing that the modern information-orientated world needs a curriculum which will guide learners to unlock and evaluate fast-changing knowledge. Educational and social accountability requires critical, creative and problem-solving thought, imagination and innovation. The first question to arise is whether the current approach to curriculum design provides adequate opportunities to do so, and the second question is whether CAPS (Home Language) will meet the requirements stated above. The conclusion can be made that CAPS (Home Language) can be seen as a double-edged sword: on the one hand it is appropriate and useful for the inexperienced and incapable teacher who chooses to use a prescriptive approach to know exactly what to teach when. But on the other hand, CAPS (Home Language) restrains the experienced and capable teacher who chooses curriculum negotiation and who wants to challenge their teaching adequacy in the interest of socio-communal and educational accountability.

... one which requires learners, in Freire’s (1975) critique, to bank received knowledge as a collection of “communiques” or states of knowing, and the other which, in Dewey’s (1910) sense, encourages learner to explore ways of knowing, to interpret knowledge and to engage in dialogue with it and themselves ... [A curriculum] of the former type is personal, extrinsic, idealistic and presents a picture of static ‘reality’; the latter type is personal, intrinsic and is one of ‘reality’ in process.

[They] are concerned with the specification and planning of what is to be learned, frequently set down in some written form as prescriptions for action by teachers and learners. They have, traditionally, the mark of authority.

The revised policy and the ensuing debate cause even more confusion and uncertainty … While the RNCS/NCS had positive support generally, there was nonetheless considerate criticism of various aspects of its implementation and demands on teachers’ time, as well as widespread learner underperformance in international and local assessments … The key areas identified for attention were the proliferation of curriculum policy and guidelines documents, the transitions between grades and phases, assessment [particularly continuous assessment], learning and teaching support materials [particularly textbooks] and teachers and training [for curriculum implementation]. (Umalusi 2014:15) 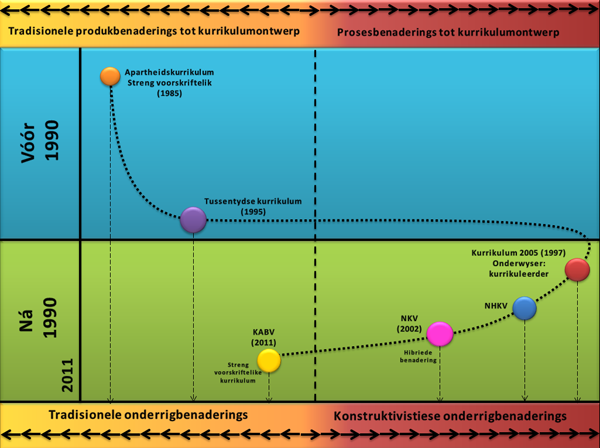 This is the first great mistake, prompted by both generosity and stinginess, a mistaken generosity that would make all students equal by giving everyone the same curriculum ... A standardized curriculum ignores students’ diverse interests, needs, goals, skills and aspirations. Instead of recognizing and supporting different talents, schools measure everyone by the same yardstick and claim that they are providing equal opportunity by doing so.

Between those dates lay what I called: ‘... the window of opportunity’ for learners, and this window was both limited and limiting for all learners – the same constrained block of time repeating itself year after year. These windows were also severely constraining to educators who had to cram their ever-expanding curricula into these static and fixed time boxes, no matter how long it might actually take learners to grasp master it.

Chisholm, L. 2003. The state of curriculum reform in South Africa: The Issue of

Loh, J. 2016. From fantasy to depression: A beginning teacher’s encounter with performativity. Journal of Teacher Education, 1(1):1–12.

MacDonald, C.A. 2002. Are the children still swimming up the waterfall? A look at literacy development in the new curriculum. Language Matters, 33(1):111–41.

Suid-Afrika. Department of Education. 2009. Report of the task team for the review of the implementation of the National Curriculum Statement. Pretoria: Departement van Onderwys.