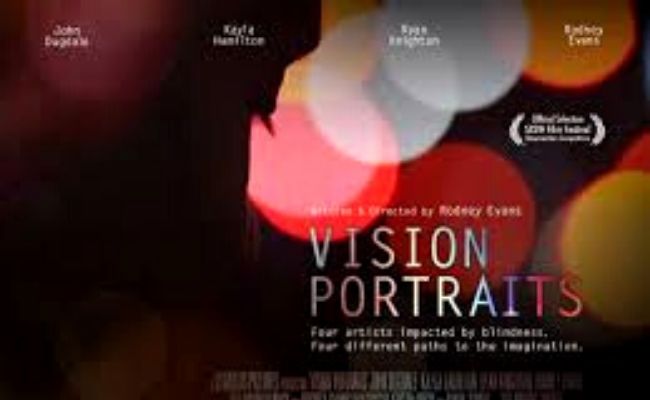 "Vision portraits is a deeply personal documentary by award-winning filmmaker Rodney Evans (Brother to brother) as he explores how his loss of vision may impact his creative future, and what it means to be a blind or visually impaired creative artist. It’s a celebration of the possibilities of art created by a Manhattan photographer (John Dugdale), a Bronx-based dancer (Kayla Hamilton), a Canadian writer and storyteller (Ryan Knighton) and the filmmaker himself, who each experience varying degrees of visual impairment. Using archival material alongside new illuminating interviews and observational footage of the artists at work, Evans has created a tantalising meditation on blindness and creativity, a sensual work that opens our minds to new possibilities.”

It is a moving portrait of artists losing their sight, the one thing they depend on most. It is also an inspiration to see them fight the disease, the limitations, and still succeed at their craft.

Rodney Evans, the director, does succeed in creating an experiential film by showing you what visually impaired people see, and how that changes – the tunnel vision, blinding light, slivers of sight in one eye, and complete blackness. It makes the viewer feel claustrophobic, which is, I suspect, the point of the exercise.

It certainly is a topic worth making a film about, as the sighted has little understanding of the daily turmoil that visually impaired people go through. As a film, though, it is quite average – from the cinematography and the editing, to the format and the depth of the interviews.

The subjects, their art and their struggles are interesting enough to warrant watching the film.

You can also watch: