Why would one publicly join the Palestinian cause if one is not Palestinian oneself? What about Israel, which also suffers violent attacks? Views on Israel and the Palestinians are often positioned as though there is a conflict between two equal entities. As a result, some people argue for a “balanced” or a “neutral” approach in a case that many deem as too complex to unravel or too hopeless to address. In this article I use some of the findings of my doctoral research in empirical ethics (Momberg 2017) to explain why Israeli and South African citizens joined the Palestinian struggle.

In this inductive, contextual case study I wanted to gain insight into why, from their own perspectives, a selected group of 21 South Africans and Jewish Israelis are participating in the Palestinian liberation struggle. The respondents were selected according to a snowball technique. Eleven are South African and the other half are from Israel; one person is a citizen of both countries. Since the research was exploratory, it was informed by the research question rather than by any suppositions, and the findings are presented in the form of grounded statements.

The knowledge sought is sensitive and very personal. I was interested in the activists’ own opinions, values, preferences, attitudes, levels of (un)certainty, fears, existential perceptions, levels of commitment; that which allows for intention, moral deliberation, meaning, belonging or a sense of worthwhileness; information on how they view themselves in relation to others, and experience their practice; their motives, goals, roles, strategies, platforms and/or other reasons that inspire them. This implies that I wanted to gain insight into their innermost and perhaps the less clear or even conflicting urges, notions, feelings and cognitions that drive or motivate them to take a public stand.

I used in-depth, personal interviews, guided by a general paradigm of inquiry, and I encouraged each respondent to share her or his views freely. The manner and the sequence in which core areas were probed changed according to the flow of each discussion, but I started off by asking each respondent how long she or he had been involved in the Palestinian struggle. In almost all cases, the question elicited anecdotal responses, referring to earlier life experiences and cognitions that in hindsight underscored the respondents’ initial commitment to the Palestinian struggle. Their various reasons for why they became, and continue to be, activists in the Palestinian struggle are explained in full in my dissertation (Momberg 2017:83–296), but in this article the focus is on those incentives that spurred the 21 civilians to move from no involvement to voluntary, public advocacy.

Firstly, their activism began with either the confirmation, or the challenge, of pre-existing perceptions. Ten people affirmed the Palestinians’ experience of pain and their desire for freedom without needing to transform any pre-existing loyalties. They realised from their introduction to the matter that the nature of the tension is that of systematic and systemic oppression. They did not have to abandon any vested or treasured attachments before committing to activism. It may have taken them some time to develop a deeper understanding of the issue and/or to step formally into the public domain, but their grasp of the asymmetric nature of the dynamics was immediate. The other half discovered that their prior knowledge and impressions around the Palestinians and Israel had been inaccurate and they adjusted their views. Whether they changed vested loyalties and/or misperceptions before committing or not, the respondents’ entry into activism was marked by two similarities: All realised the dynamics of a disproportionate power balance in which the Palestinians were responding to Israel’s military, socio-political, economic and ethnic oppression and/or dispossession. They realised that arguments that underpinned the claims of a brave Jewish nation defending itself against ruthless, irrational Palestinian aggressors misconstrued the truth. Moreover, all ascribed the rise of their commitments to their life views and to values already present in their lives before they joined the Palestinian struggle.

But one cannot assume that a compelling awareness of the plight of the Palestinians necessarily leads to a willingness to intervene. Why, then, did the respondents move from recognition and affirmation to committed activism? The second lens highlights specific, varying organising principles that underpin the embodiment of the activists’ pledge to the Palestinian struggle in their committing to advocacy. These modes are used to describe the rise of their commitment. They include normalcy; chance; a special calling or destiny; choice; a felt sense (an urge, instinct, intuition, guilt, shame, anger, excitement, being driven or pulled); urges and corporeal sensations and inexplicable realisations that seemed to hover just beyond the respondents’ grasp or were difficult to express. All strongly sensed a personal appeal and something within themselves, over and above the logical factual merits of the cause. Thus it was not so easy to pinpoint one single, or even the deepest, behavioural mode for bridging the space between non-involvement and public advocacy.

However, the respondents did mention specific, contextual experiences that had served as triggers or catalysts to convince them of the validity of the Palestinian cause. These contextual experiences – that can be considered a third lens – included other human rights struggles, particularly the South African anti-apartheid struggle and the links of these with the Palestinian situation; the contributions of other people such as family members, public figures, intellectuals, writers and activists, as well as positive and negative encounters at conferences and dialogue forums. Ideological frameworks, movements, paradigms, spirituality and religion also influenced the respondents. Similarly, experiences and impressions of violence such as Israel’s military abuse, and other encounters with armed struggle drew their attention and sensitised them to the abuses being perpetrated.

Notwithstanding the variety of experiences, exposures and modes of action, all 21 respondents’ entry into the Palestinian struggle was characterised by the same core insights:

Whether or not the activists’ involvement was the outcome of years of exposure and change, and notwithstanding any of their other reasons, the central issue all of these respondents faced and affirmed regarding their committing to activism was a desire to align their existing inner values with the outer reality they encountered in and through the Palestinian struggle. 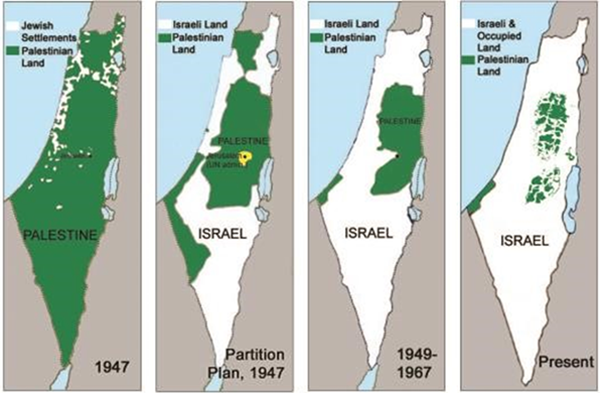 Davis, U. 2003. Apartheid Israel. Possibilities for the struggle within. Londen: Zed.

Pappe, I. 2013. The ethnic cleansing of Palestine. Londen: Oneworld.

Raheb, M. 2014a. Faith in the face of empire: The Bible through Palestinian eyes. New York, NY: Orbis.