In light of Mandela Day, Menán van Heerden chats to Eleanor du Plooy, project leader for the Ashley Kriel Youth Desk at the Institute for Justice and Reconciliation (IJR), about the work of the IJR.

The late Nelson Mandela dedicated his life to the pursuit of justice, freedom and reconciliation. Mandela Day was established to dedicate time and effort to improve the conditions within South Africans’ own communities. In what ways are these values (and those of Archbishop Emeritus Desmond Tutu, the patron of the IJR) reflected in the work of the IJR?

Our vision as an organization is to build fair, democratic and inclusive societies across Africa. To this end, an important aspect of the work of the IJR is the process of restoring the human dignity that oppression, conflict and poverty robs from its victims. Much of this work involves the deliberate bringing together of people from various walks of life who often have different points of view. Through our different projects, we try to create spaces that allow for a more authentic, honest engagement, particularly around issues that are difficult – and often painful – to talk about. We work in rural and urban areas with young and old, and make every effort to ensure that the most vulnerable members of our society – and those who have been and continue to be marginalized – are included in the conversation. This process of restoring human dignity can be a healing experience – healing in the heart of the individual, in the family and in the community, and ultimately healing on provincial and national levels. 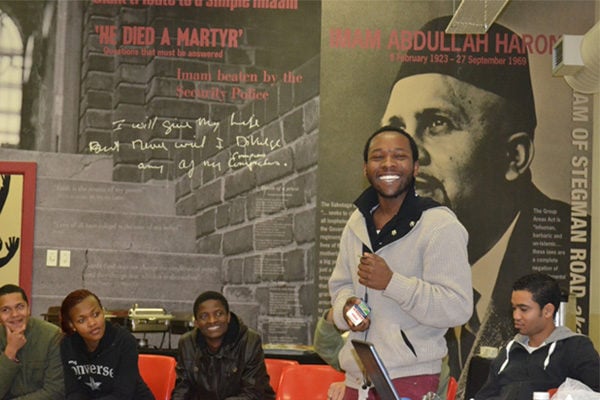 Abongile Mjokozeli speaking at one of the youth workshops hosted at Community House, Salt River.

How would you define the pursuit of justice and reconciliation and the importance of these objectives for South Africa?

I understand justice and reconciliation to be two sides of the same coin – one cannot be fully realized without the other, and the two are inextricably linked. The absence of justice makes reconciliation impossible. For me, reconciliation is about us collectively finding ways to walk together. It is a process that hinges on a holistic understanding of justice that emphasizes accountability for past wrongs and the need for future, peaceful co-existence. Individual accountability is a key component of justice, as are broader societal measures to address the structural injustices that face South Africa. Both in South Africa and abroad, IJR’s aim is to move beyond oversimplified binaries of reconciliation versus justice, and to continue its work to develop more complete approaches to both reconciliation and justice.

In a sense, reconciliation requires that we, as South Africans, re-introduce ourselves to one another, and, in efforts to construct a joint future, acknowledge and include everyone on the basis of social justice, mutual respect and human dignity. It is precisely because of the history of injustice in this country that every South African should pursue justice and ultimately reconciliation in their own sphere of influence. If we fail to recognise others as other faces of ourselves, then we are contributing not only to each of their oppressions, but also to our own; the anger which often stands between us must be used for clarity and mutual empowerment, not for evasion of guilt by further separation. I am not free while any other is unfree. Reciprocal recognition is the basis of freedom. Without it, we merely exist in relations of bondage. 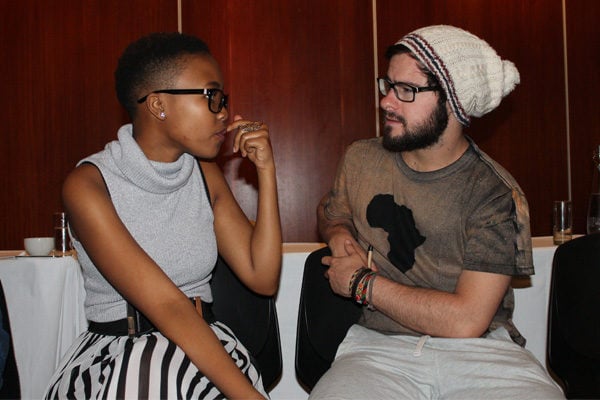 Hillary Mahlangu and Wynand Breytenbach discuss what Heritage Day means to them.

All South Africans have the right to vote in our young democracy. However, numerous issues (such as racism, the struggles of social cohesion, socio-economic justice and the spatial legacies of apartheid) are still furthering exclusion and division. In what ways does the IJR confront these issues?

While justice retains a fighting chance in South Africa, and while the political transition brought substantial and stable gains to the majority of citizens, the country has its work cut out if it is to remain stable, let alone realize even the ideals with which it made peace in 1994. In recent focus group discussions with youth in communities in Vryheid, Warrenton, Grahamstown and Kimberley, some questioned why they should even vote if nothing seems to change. In the absence of or the delayed realization of these material ideals, the need to restore the human dignity of the more vulnerable and marginalized becomes even more critical in the realization of their social agency.

At IJR, we believe communities must participate in identifying, analysing and creating solutions to the conflicts and injustices that affect them. IJR contributes expertise to empower communities further with knowledge and skills to develop their capacity to achieve socio-economic justice and reconciliation. IJR’s approach is to orient itself with regard to neglected areas of justice.

In your June 2017 News24 column, you note that the #FeesMustFall student movement “brought to the fore … a new critique of political economy that brought together class, inequality, identity and lived experience. That’s where I find hope and we need to keep on talking no matter how uncomfortable it is.” As a post-conflict society, what is the value of dialogue for South Africa to move ahead and build a new South Africa?

Talking to one another is the first step in the very necessary process of re-humanization. When we engage one another in conversations that seek to understand rather than just to respond, we become better equipped not only to deal with difference, but potentially craft joint solutions. At IJR, we believe in the power of dialogue. And this is not talking for the sake of talking, but rather talking in a way that allows us to move from one point to another. In our work, we therefore take great care to facilitate deep and sustained conversations on critical issues that are transformative, problem-solving and inclusive.

If we are to make inroads into changing the legacy of apartheid and fostering new ways of being with one another as fellow South Africans, we need to consider critically these everyday injustices, and actively work toward dismantling systems which perpetuate apartheid thinking. Apartheid and colonialism were deliberate systems; therefore, efforts to bring about positive social change must be conscious and equally deliberate. Above all, these actions must be demonstrable. 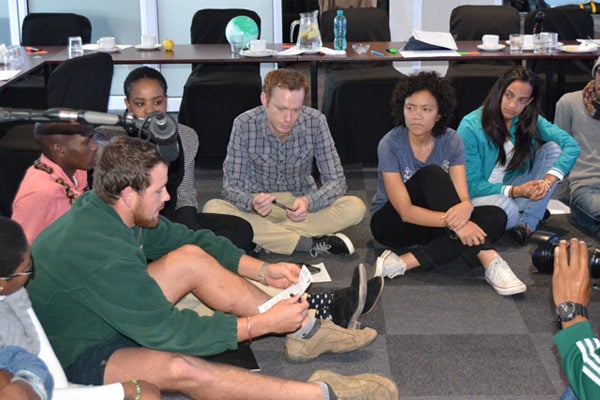 There is some kind of magic that happens when people from different backgrounds come together in conversation. Here, Francios Swannepoel, a former agriculture student, shares with the group some shifts he has experienced during this process.

The life and legacy of Ashley Kriel epitomizes the power that young people who are committed to bringing about positive social change have. He was only 20 years old when he was killed by the apartheid police; yet, in that short time, he inspired countless others who were fighting in the struggle for freedom. The work of the Ashley Kriel Youth Desk is to activate that transformative power that I believe all young people have. The project brings together a diverse group of young people, including university students and employed and unemployed youth, and engages them in conversation on issues of social justice and reconciliation. It has been an incredibly powerful experience to see the shifts in attitude and behaviour among these young people, many of whom have now taken up their own projects of transformation within their communities.

A focus of the IJR is intergenerational dialogue. Why is this so important?

In order to strengthen our families and our communities, we need to nurture opportunities for people to come together across generational lines to share views and experiences and provide support for one another. Intergenerational programs and conversations create spaces where inaccurate stereotypes can be challenged and dispelled. They have the potential to strengthen communities through the sharing of talents and resources that could help in furthering social cohesion. Children, youth and older adults become less alienated, and, in so doing, recognize and affirm that everyone can be a contributing member of society. Intergenerational programs can inspire collaboration that ultimately could unite community members to take action on public policy issues that address human needs across the generations. Given the divergent views between generations around the South African transition and the necessary compromises that were made and the consequent disjuncture that these divergent views can cause, the creation of spaces for intergenerational dialogue is crucial. 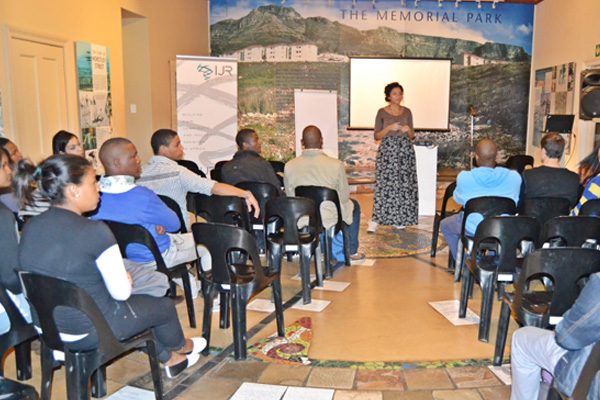 A key component of the project is to make use of space in interesting ways in order to encourage critical thinking and to expose youth to different environments. Here, youth meet at the District Six Museum, talking about identity.

Are the challenges faced by the so-called born-free generation very different or very similar to the struggles of their parents’ generation? How do the different generations engage with past and contemporary struggles respectively?

We know that the world young people grow up in now is significantly different to the world the previous generation grew up in. Extended periods in education for some, a precarious connection to the labour market, rising inequality, changes in patterns of home ownership and family formations, and increased access to information through digital media mean that the transitions that young people make now are qualitatively different to the ones made by the previous generation. What persists, however, across the country is that very few young South Africans experience a marked difference materially in their lived experiences compared with those of their parents’ generation. Limited access to quality education, abject poverty and high levels of unemployment mark the lives of many young South Africans. These, too, are markers of their parents’ generation, and some experience an even greater degree of hopelessness than their parents’ generation. In addition to this, the younger generation is also confronted by other limits to their life chances, in the form of escalating violent crime and HIV infection. This has led to some asking the question, “Born free from what?” The slow pace of social transformation, material change and socio-economic redress and reform has led to the rejection of the term “born free” by many young South Africans. This is because the majority of South African youth do not experience significant material differences in lived experience compared with their parents’ generation.

The economic realities of South African youth are a major contribution not only to their perceptions of the transition, but also to their sentiments around/toward democratic participation.

What lived experiences/stories of people you have worked with have affected/inspired you the most?

I am so fortunate to do this type of work. To me, it is spiritual work, because we deal with the lives and stories of people who are brave enough to come to the table and share of themselves. I will never forget how, after an annual Ashley Kriel memorial lecture, an elderly man came up to shake my hand. With tears in his eyes, he told me about the impact the project had had on his daughter. He mentioned seeing the growth in his daughter, but also described how it challenged their whole family to start thinking differently about the parts they could play in crafting a South Africa that is fair and inclusive, and where we live the ubuntu we profess to believe in.