Huisgenoot as magazine of its time: a media-historical chronicle of a magazine as evergreen over one hundred years

The Afrikaans magazine Huisgenoot celebrated its centenary in May 2016. This article uses a media-historical point of departure to record the development of Huisgenoot from 1916 to 2016, with a focus on its idealistic-ideological ideals as a publication of its time, as well as its market-driven goals in every era of its existence. Media history as the field within which this analysis is located is outlined, as is the historical context for the development of the publication. This is followed by a discussion of the development of the magazine in terms of both its service ideals and its profit focus – or, in other words, its idealistic ideology and its market-driven ideals. It is also necessary to highlight the publication's specific contribution to the development of Afrikaans, as this is closely connected to the magazine’s history. The subsequent chronology attempts to describe how the magazine has developed as a chronicler of its time, and how it has met the demands of its time – from a narrowly focused Afrikaner cultural publication one century ago to the magazine it is today, with a more global, popular-cultural approach. In particular, the chronology shows how, over one century, Huisgenoot has established itself not only as a “home companion” (the meaning of the Afrikaans title), but also as a reflection of its time, and thus how it has maintained itself as an evergreen publication in changing markets.

For its first 60 years of existence, the two goals mentioned were more or less in harmony. However, market factors, together with the psycho- and demographics of its target market, subsequently changed over time, and the magazine reached a tipping point in its sixth and seventh decades when it had to reposition itself in a radical new way in order to survive. The resulting emphasis on what has been a mainly commercial, market-driven consumer magazine is accordingly described. Nevertheless, the magazine succeeded in repositioning itself still to remain a “home companion”, even after 100 years.

In terms of media history, the point of departure according to the Rankian dictum of “to simply show how it really was” (in Stroud 1987:379) – the famous verdict on the essence of historiography – might be too simplistic an approach. Leopold von Ranke regarded as the father of modern historiography, can, of course, be criticised in our much more complex era, especially given the debate on whether historiography falls within the humanities or the social sciences, and thus whether it should be studied from a positivistic or critical point of view. This study, however, accepts Fourie’s (2007) statement that the positivistic and critical approaches are the basis of the two theories from which mass communication developed and that, in essence, the two complement each other.

The historical research method, according to which primary and secondary sources are used to compile data, was followed in order to build what is known as a “critical contextual link” between the present and the past. In doing this, the researcher focuses on the question of understanding the magazine as a phenomenon of its time by understanding its history. Lundy (2008) emphasises that the historical method is more than just a collection of data and its end result (the report in which it is recorded), but that it can also draw theoretical and holistic conclusions on historical events and eras. Still, one has to be aware of, and acknowledge, that (media) history can only collect, compile and interpret “fragments”.

Magazine studies is a relatively understudied field in the also relatively understudied field of media history, the latter a recent phenomenon and an understudied sub-discipline in the field of journalism and media studies. For the literature overview the following were found regarding magazine studies: the master’s studies by Rabe (1985), Townsend (2004), Rossouw (2005), Nänny (2007), De Villiers (2009), Ekron (2010) and Van der Linde (2010); and journal articles on consumer magazines by Laden (2001; 2015) and Odiambo (2008).

Despite its existence over one century, the specific subject of this article has not often been the focus of an academic project. The oldest is probably the master’s study by Schoombee (1924), after which the following could be found: Labuschagne (1948), Van Eeden (1981), Joubert (1983) and Froneman (2004). In the doctoral dissertation on the early history of the Afrikaans press by Du Plessis (1943) there are references to the magazine, as well as in the publication by Nienaber (1943). In more recent academic works, Viljoen and Viljoen (2005) wrote about the image of femininity in Huisgenoot,andPretorius (2013) on the image of manliness.

Huisgenoot’s third editor, Markus Viljoen, referred to the magazine in his autobiography (1953). The magazine was also covered in publications for Naspers’s 75th jubilee in 1990 and 1992 (Muller 1990; Beukes 1992a; 1992b). Commemorative issues for its 90th year (2006) and its centenary (2016) were aimed at a general market, but also contained some useful information despite their consumer market approach. In 2015 the magazine’s 12th editor and current head of Media24, Esmaré Weideman (2015), wrote a contribution on Huisgenoot in a commemorative publication for Naspers’s centenary.

The context in which Huisgenoot was founded can be described as a “volksera”, or people’s epoch. Because of the devastating effects of the South African War (Anglo-Boer War) from 1899 to 1902, the beginning of the First World War and the consequent Rebellion, the (white) ethnic Afrikaner group were impoverished politically, economically and culturally. This inspired them to “visions of an Afrikaner renaissance” (Scholtz 2010:3) – as a nation with its own language and culture, thus feeding a latent nationalism that began as an idealistic movement, but developed in the 1930s into an ideological movement. As part of this empowerment, the publishing company Nasionale Pers (initially De Nationale Pers) was founded in 1915, and today is known as the global technology giant Naspers.

The context in which Huisgenoot was founded can be described as driven both idealistic-ideologically, as well as capitalistically. Naspers was entrepreneurial from its inception (thus market-driven), with organic growth – the founding of Huisgenoot barely one year after its establishment – as well as acquisitions early on. As it has been formulated: “Ideological idealism had to be reconciled with financial realities” (Muller 1990:467). Huisgenoot had two goals: it had to give Afrikaners the “inspiration, information and light entertainment they so desperately needed”, and had to put the company on a sound financial footing. The first goal can be seen as ideologically driven; the latter market-driven.

Although the magazine was not a party-political messenger, it was “pro-Afrikaans in a wide sense of the word”. It furthered the Dutch language, as well as the development of Afrikaans. All in all, it positioned itself in an almost mystical “volksnasionalisme” (people-centred nationalism).

The magazine not only had to ensure the financial survival of its mother company and the cross-subsidisation of its sister publication Die Burger, but its nationalism simultaneously also had to empower its readers.

Regarding the development of Afrikaans, one of the main idealistic-ideological aims of the publication was to build Afrikaans as a recognised language. Indeed, the publication was later described as the decisive factor in the creation and establishment of Afrikaans. The magazine also led in terms of developing Afrikaans literature, and encouraged early writing through competitions. It also encouraged a reading culture, as well as an appreciation for the theatre, the arts and architecture.

Huisgenoot had such great initial success as a monthly that it was repositioned in October 1923 as an “illustrated weekly”. This was a direct result of a competitor, Brandwag, closing down – one example in which the market motive is clear, as Huisgenoot immediately exploited the gap in the market and the bigger audience by publishing “lighter matter” (Froneman 2004:68). Circulation success also followed when the publication frequency was changed, thanks to the “need from the public for more Afrikaans literature and the expectation of more profit by the owner” (Antwoorde op vraelys aan koeranteienaars s.j.). It also established supplements for the youth, again to fulfil both its idealistic-ideological and profit expectations.

The changing psycho- and demographics of the Afrikaner target market, however, caught up with the magazine. After the Second World War the magazine market changed drastically, and once flourishing titles had to reimagine themselves. Huisgenoot, previously a market leader, experienced such significant circulation losses that “drastic decisions” regarding its survival had to be taken (Spies 1992a:351). Thanks to new printing technology, and the fact that Naspers as a company invested continuously in new printing presses, a revolutionary new full-colour magazine press helped in the survival of the magazine. Also, a more commercially focused approach regarding target markets – thus, no longer an idealistic-ideological approach – assisted in saving the magazine for the time being.

Yet the changing psychographics of the Afrikaans readership required another change of direction in the next decade. Afrikaners now were more urbanised, with a taste for popular culture. The content had to be aimed at more “worldly” interests (Booyens 2008). “A fresh, market-orientated approach was needed”, with “famous” rather than “important” now the guideline. The iconic magazine brand name survived in a spectacular way, setting new circulation records. It also morphed with its time, remaining a “home companion” to generations of Afrikaans readers and successfully answering their needs, whatever the era. It can, therefore, be said that the magazine fulfilled its idealistic-ideological as well as its mercantile goals throughout its century-long existence by satisfying its readership’s needs, then and now.

The conclusion, therefore, is that over the years this publication has morphed into a different type of magazine, but one that still attempts to serve the psychographic needs of its target market. It does this through a new, entertainment-focused popular type of journalism. Indeed, Huisgenoot as an evergreen “home companion” has not only survived 100 years, but has achieved its success with excellence. 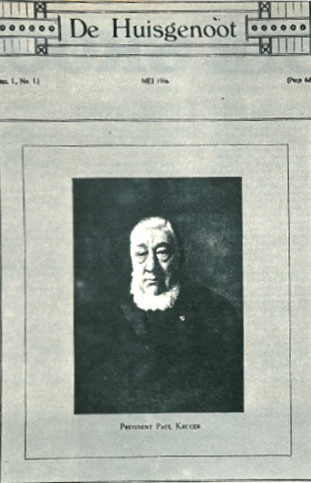 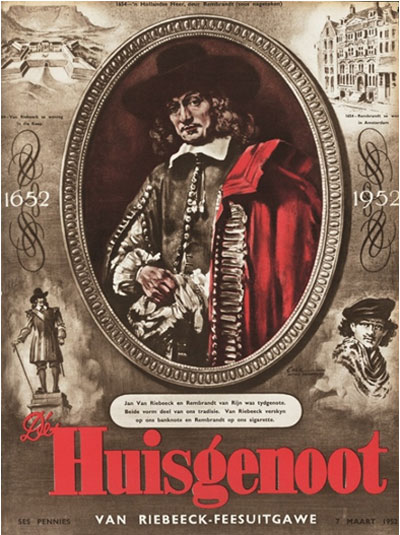 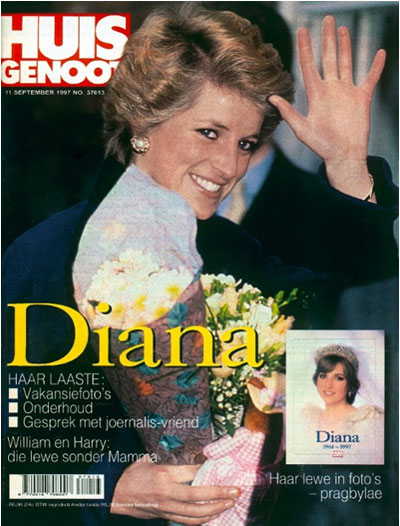 Giliomee, H. 2003. The Afrikaners. Biography of a people. Kaapstad: Tafelberg.

―. 2015. Who’s afraid of a black bourgeoisie? Consumer magazines for black South Africans as an apparatus of change. Journal of Consumer Culture, 3(2):191–216.