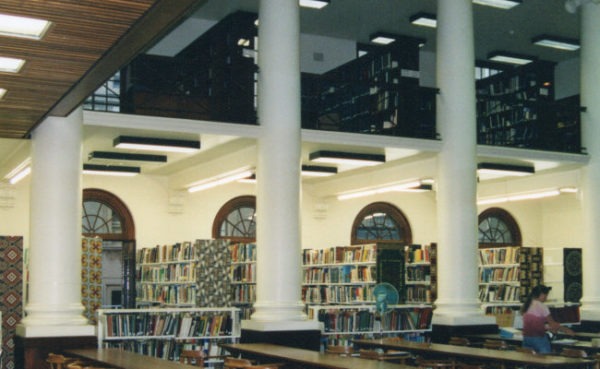 Used repeatedly since Sunday, the word perfectly describes the state of the Jagger Library’s Reading Room at UCT – and our souls – after the savage fire.

What I remember most is the silent communication, between researcher and librarian, between researcher and the past – in my case literary. The space was architecturally stunning, full of ancient light. It made you feel safe. You would enter the room and request the materials you wanted to look at, and within minutes one heritage treasure after another would arrive at your desk, for you to study and marvel at. 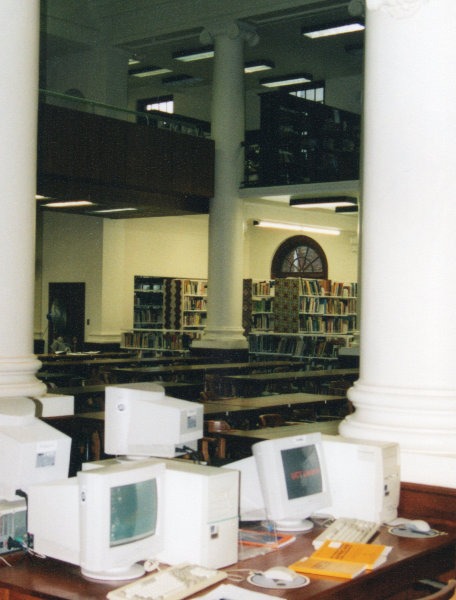 My travel diary records my first visit to the UCT libraries on 24 March 2004. I had come all the way from Salzburg to do research for my PhD thesis on Nadine Gordimer’s post-apartheid writing, and according to my notes I “looted” the African Studies archives that Wednesday and over the following few days. I list a pamphlet compiled for Gordimer’s 80th birthday and the only play she ever published – The first circle, 1949 – among the precious items I held in my hands and read for the very first time back then. I left the library with 200 pages of copies and worries about how to “transport it all back to Austria” in my small suitcase. Among my diary notes are the visitors parking tickets welcoming me to UCT, and a reflection about what a “nuisance” I must have been, with my “too many wishes and questions”, to all the staff members of the library. After my last visit during that initial trip I commented on the well-stocked African Studies collection and how I liked it best of all.

Somewhere between those walls and the pages sheltered within them a love was nurtured, grown. Settling permanently in Cape Town 18 months later I continued returning to the Jagger Library. It was there, while researching slave narratives at the Cape (another of my literary interests) for a conference paper, that I met Sandra Rowoldt Shell and discovered her work as a librarian and historian. My PhD was completed, but my research longings continued and the UCT libraries stilled them during long hours of blissful interaction with the manuscripts, rare books, artworks, pamphlets, etc, that form UCT’s Special Collections. I use the present tense form on purpose, hoping against hope that some – many, most? – of those invaluable artefacts have survived the catastrophe of the past weekend. I cannot bear the thought that the folders of copied materials in my Cape Town study and those copies of 2004, now packed up in boxes and stored in my mother’s attic, might be a tiny fraction of what prevails of those original riches.

I try not to think of my own books, which in the 17 years since my first encounter with the library have been included in its collection – the last time I visited, they were on display in a glass cabinet and it thrilled me no end to see them there. They, too, might be lost. Yet no matter how painful the idea of them burning is, I understand that they can be easily replaced as they are not out of print and I am still very much around to facilitate the process.

The other word that has been haunting me ever since I saw the first photographs and videos of the burning library on Sunday. Cape Town’s other architectural gems in the area suffered horrific damage during the fire. Humans and property were in danger. The loss is unimaginable, numbing. But people have been evacuated, buildings will be rebuilt and renovated – they have a future beyond the disaster. However, paper damaged or consumed by fire, or other elements, cannot be replaced. The events of Sunday make one understand the visceral meaning of “forever”.

The losses remain to be catalogued. Some of the material would have been digitised, but an electronic copy of anything is just that: pixels on a screen. They will not awe you. Not the way the last page of Virginia Woolf’s diary awed me at the New York Public Library, or the original manuscript of Lord Byron’s “She walks in beauty” did when I was allowed to hold it between my trembling fingers at the Brenthurst Library in Johannesburg. Moved to tears on both occasions, I knew I would forever remember those magical moments of connecting to something beyond words, beyond meaning.

On Sunday I also cried, but not in wonder. Just trying to imagine the countless, indispensable pages of the Jagger Library at the mercy of their merciless opponent, I felt utter despair. So fragile, so easily destroyed. And yet I couldn’t help remembering how difficult it can be to open corrupted computer files which are only a few years old, while I can still access and read André’s study notebooks from the 1950s or the 1790 edition of François Le Vaillant’s Voyage de Monsieur Le Vaillant dans l’intérieur de l’Afrique, par le Cap de Bonne-Espérance, dans les années 1780, 81, 82, 83, 84 & 85 that are on the shelves of our own personal library. After André’s death I became its sole custodian. I now own a rare copy of the book which features Gordimer’s The first circle, the name AP Brink inscribed on its first page, but all I can think of are all those other paper artefacts irredeemably lost in the fire.

Like thousands of scholars and readers before and after me, I have experienced the pure illumination of discovery that a space like the Jagger Reading Room offers to its visitors. When I first met Rahla Xenopoulos’s mother a few years ago, she spoke lovingly about books. “Your library is your soul,” she said, and lamented the dismantling of her private collection when she moved from Johannesburg to Cape Town.

As we anxiously await the assessment of the extent of what has been lost and brace ourselves for the recovery efforts, we are grieving for our soul.