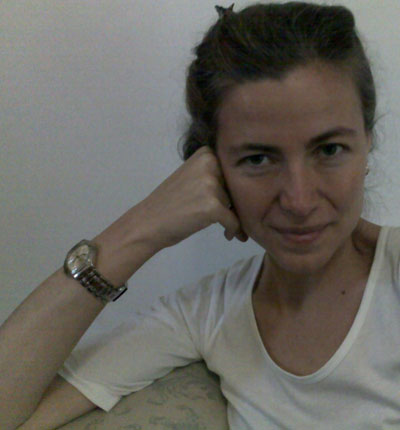 Karina M Szczurek is the author of Truer than Fiction: Nadine Gordimer Writing Post-Apartheid South Africa as well as the editor of Touch: Stories of Contact, Encounters with André Brink, Contrary: Critical Responses to the Novels of André Brink (with Willie Burger), and the 2015 SSDA anthology, Water: New Short Fiction from Africa (with Nick Mulgrew). Her play for young adults A Change of Mind won the MML Literature Award in the Category English Drama in 2012. She also writes short stories, essays, poetry and literary criticism. Her debut novel Invisible Others was published in 2014. It was longlisted for the 2015 Sunday Times Barry Ronge Fiction Prize.

"Watching Ukrainian parents evacuate their children to safety while staying behind to fight for their future breaks my heart. I cannot imagine the levels of anxiety and distress this kind of separation causes for a family. These people will never fully recover from this, even if they survive."

Cosmonauts do it in heaven by Keith Gottschalk: a book review

"For the uninitiated, Cosmonauts do it in heaven might feel like an exploration of space itself, seemingly obscure and impenetrable at first, but the poetry is infused with a desire to take the great leap, to reach for the sky and to celebrate its wonders and 'mysteries,/ solved & sensuous' ('First light')."

Heritage to ashes, dust to dust

A book of friends: In honour of JM Coetzee on his 80th birthday, edited by Dorothy Driver: reader impression

"What will stay with me for a long time after reading this multilayered collection is the deep sense of curiosity which runs through A book of friends – it is an expression of care which the authors and artists share with the man they pay tribute to."

Searching for Simphiwe by Sifiso Mzobe: a book review

"Mzobe is a consummate storyteller, and it is easy to lose oneself in the tales he shares so compellingly. My hope is that we won’t have to wait another decade for his next book to hit our bookshelves and hearts."

"It offers fascinating insight into a dying art – editing – and the industry that is killing it instead of treasuring it for what it can contribute to the wealth of our knowledge and the joys of our entertainment."

"To me, the anthology was a revelation. It achieves precisely the goal it sets out to: it consoles, enlightens, nourishes the grieving soul."

"It is a beautifully produced book that will surprise and enlighten even the most devoted Coetzee readers, but might also be an intriguing entry point for those yet unfamiliar with the Nobel Prize winner's work."

"The individual contributions focus on a fascinating and relevant selection of primary sources, mostly novels and short stories, reaching as far back as Sol Plaatje’s Mhudi (1930) and incorporating contemporary texts into the diverse readings of the South African literary canon."

"Bekker has a fascinating voice and she is not afraid to experiment with the short form."

"I did not buy a caravan; but I realised that a book is like a caravan, a home away from home, taking you to unexpected places. It seemed only natural to name the publishing house I was dreaming of Caravan Books. My friend, Alex Smith, recommended 'Press' instead of 'Books', and the 'K' was my own idea."

"Writing in English, Afrikaans and German, Snyckers explores the possibilities of translation and creative expansion."

"Lacuna is the story of Lucy Lurie, a fictional woman who shares a name with one of the main characters in Disgrace (published exactly two decades ago in 1999). It is a feminist ‘reply’, for want of a better word, to JM Coetzee’s most famous — or infamous (depending on one’s reading) — novel."

"In Secret keeper, Hammerton manages to capture the essentials of most adult lives – love, loss, loneliness, anxiety, ageing and death – and leaves us pondering our own mortality, and that deep longing not to feel our insignificance 'at night' when we are all alone under the 'black sky, stars,/ the milky way'."

"The central question Boehmer addresses in Postcolonial poetics is 'whether there was a kind of reading that postcolonial texts in particular solicited' and, if yes, what its main characteristics were."