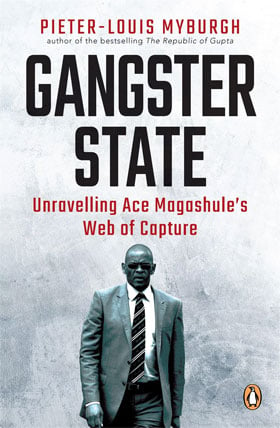 Gangster State is a disturbing book, and this is really an understatement. I am not a supporter of any political party. I do, however, admire the ruling ANC (African National Congress) for their proud history of non-racialism and non-sexism, as the party that fought for the liberation of South Africa. Yet the ANC has been clouded in controversy ever since it came to power in 1994. By the admission of their own members, the party was not in any shape to be a governing party, as it had to make the painful shift from liberation movement to ruling political party, after having been disrupted for so many decades by the previous (minority) government and banned from the country. Having a keen interest in the history of the Free State and the ANC, and with the book’s launch having been disrupted, I was intrigued to find out more about Gangster State and why it was causing so much controversy.

Gangster State chronicles the life of Ace Magashule, former Free State premier and controversial secretary general of the ANC, who grew up in the Free State town of Parys. He is one of the most powerful people in South Africa, but his whole political career is known for controversies and media accusations. The book is not a biography, but it does delve into Magashule’s history and life.

The book is divided into eight parts. Myburgh starts off in part one by examining the struggle credentials of Ace Magashule. Myburgh questions some of the claims made by Magashule, such as his role in the establishment of the Congress of South African Students, and suggests that while Magashule did play a role in the struggle, he exaggerates his role. This may be so or it may not be, but what is quite useful from these early parts in the book is the realisation that in order to understand the contemporary politics in the Free State, one has to take the history of the struggle into consideration, as the battle lines for what was to follow after 1994 were already drawn during the 1980s, when the Free State was divided between a northern and a southern faction within the ANC, with Magashule being part of the northern faction.

According to Myburgh, struggle credentials play only so much of a part in ANC politics, with the real battle being fought in the branches. This, according to Myburgh, is something which Magashule realised well. The author also seems to suggest that while Magashule enjoyed a lot of support in the Free State, he was repeatedly sidelined by the national structures of the ANC. The first premier of the Free State after the 1994 elections was Mosiuoa Lekota, today known as the leader of the Congress of the People (Cope), a breakaway party formed after the ousting of former President Thabo Mbeki. Lekota, himself hailing from the northern Free State, having grown up in the town of Kroonstad, became aligned with the southern faction in the ANC. While Magashule served under Lekota, it would be almost 15 years before he was to become premier.

Once in power, Magashule’s administration become involved in numerous controversial activities, ranging from housing contracts and a dysfunctional dairy farm to a monopoly on the media by means of, among others, the Gupta-owned New Age newspaper. The book also investigates the deaths of two allies of Magashule, who died in unexplained circumstances, with records of the one case having disappeared from the courts. Apart from these, the book tells the tale of an administration sidestepping tender procedures and awarding contracts to connected individuals. For the purposes of the investigation, Myburgh not only obtained many relevant records, but also includes interviews with former allies of Magashule, some of whom were key role players. The book contains a detailed set of endnotes, suggesting that many primary sources were consulted in the research. In addition, there are also some colour photographs. The book ends with a short few chapters focusing on the election of Magashule as secretary general of the ANC in Johannesburg in 2018, which was also marred by controversy.

Gangster State reads more like a thriller than a book about contemporary politics. Especially for those readers with knowledge of the geography of the Free State, and Bloemfontein in particular, the book will come to life as they will be familiar with the places mentioned. While one cannot draw any final conclusions about the content of this book, the nature of the claims made should at least lead to some form of inquest. It is quite a bold move on the part of the author to make claims such as the ones he makes. The book more than raises the eyebrows, as false claims would certainly land the author in hot water. However if there is any truth to these claims, it would mean that the ruling ANC is in really deep trouble as a party – and not only the ANC, but the country as a whole.