Fragmentology, the new manuscript study – with reference to manuscript fragments in South Africa

The study of fragments of medieval and Renaissance manuscripts and the compilation of collections of fragments is a recent development in manuscript studies. The name fragmentology has been suggested for this. The origin of the fragments has a long history, however. In this article the nature and history of manuscript fragments is discussed under the headings “What are manuscript fragments?”, “Fragments as binding material”, “Fragments as complete single pages”, “The trade in excised miniatures” and “Other uses of fragments”. Fragments from medieval and Renaissance manuscripts found in South Africa are then discussed. Meaningful information was discovered in the fragments studied, one of which is a palimpsest. It was found that a fragment that was used to strengthen the binding of a book could in some instances be more interesting than the book itself.

The aim of this article is to investigate the nature and history of the new study of fragmentology. The origins of the fragments as well as the migration of the fragments are discussed, as are the historical and scientific value of the fragments and the contribution that the fragments can make to different subject areas. A secondary aim was to determine if a study like this had been undertaken in South Africa and if it would be possible to undertake such a study here. The article is, therefore, a research report on these two aims.

The research for this article began in 2014 when I investigated 150 websites for parchment fragments that contained photos to find fragments from the same manuscripts as the South African fragments that were already known to me. I also visited the national library of Finland in Helsinki where one of the largest collections of manuscript fragments in the world is housed. I did not find fragments from the same manuscripts. I did, however, find similar fragments that proved that my dating and placing of the origin of the fragments in Manuscript 3c16 in the Grey collection of the National Library of South Africa (NLSA) in Cape Town was accurate. These similar fragments are a clear indication of how the manuscript fragments migrated. I hoped to find more fragments as binding material in the early printed books in the Grey collection. I checked the bindings of all the books printed between the 15th and the 17th centuries but did not find any fragments. It will require a lengthy research period to make absolutely sure.

I found that many of the fragments I studied contained valuable information about the origin of early liturgical chant. It was illuminating that fragments could be found even in South Africa, a country far removed from the centres where parchment manuscripts were used and made.

Meaningful fragments were found in the manuscripts of the Grey Collection of the National Library of South Africa in Cape Town. The most remarkable were found in MS 3c16, a 15th-century parchment copy of Historia destructionis Troiae by Guido delle Colonne (died 1287). The fragment consists of two parchment leaves from a notated 12th-century Latin missal bound into the front of the book. The Historia has an attractive 19th-century binding, but the fragment does not form part of this binding. It was probably part of a 15th-century binding that was incorporated into the book. The two pages are almost the same size as MS 3c16, although portions have been cut off, the one from the top of the page, the other from the bottom. Missals where the prayers, readings and chants appear in the correct sequence, as is the case here, were very rare at the time. The two pages contain five masses, all of which can be found in the Liber Usualis for Sundays after Pentecost. It was possible to determine that the fragments had formed part of a 12th-century missal that in the 15th century probably belonged to Dryburgh Abbey, a Premontratensian monastery on the border between Scotland and England, and before that to a Cistercian nunnery. MS 3c16 is a romantic novel about the Trojan War that was very popular during the Middle Ages. It is one of three copies in the Grey collection.

The “alleluia” chants on the fragments indicate a Cistercian origin. The sequence of alleluia chants in a manuscript, and especially the sequence after Pentecost, is the most reliable indication of the provenance of the manuscript. An additional indication of provenance comes from another fragment that was incorporated in the binding of MS 3c16. This is a fragment from a 15th-century legal document that mentions Hugo Douglas, abbot of the Premonstratensian abbey of Dryburgh in Berwickshire, Scotland. The manuscript was therefore probably in Berwickshire when it was bound or rebound. Hugo Douglas was abbot of Dryburg Abbey from 1427 to 1445.

Manuscript 4b3 contains in its binding a parchment cutting from a manuscript with 11th-century neumes and a Latin text that probably had the monastery of St Gall in Switzerland as provenance. MS 4b3 is a lectionary in Latin of the four Gospels that belonged to the Benedictine monastery of Amorbach in Bavaria from the 14th to the 16th century. The manuscript is of importance because of the quality of its miniatures and especially the mention of Goetz von Berlichingen, the hero of one of Goethe’s most famous dramas.

MS 48b3 in the Grey Collection is a parchment fragment of 43 very large pages that has a modern binding of the National Library. It is a notated gradual. It is intended for a choir, because the pages are large enough for a number of singers to sing from. The pages are very attractive, there are no blemishes or lacunae, the Latin texts and the notation are neatly written in black ink and the capital letters are attractively decorated in bright colours. In spite of that it gives out much less information about its date and provenance than some of the smaller fragments. The 43 pages contain the proper chants for the saints with feast days from 9 June to 24 June, a small portion of the liturgical year. The folio references in the rubrics indicate that the original volume began with the chants for St George (23 April) and that it formed part of four or five volumes of at least 120 pages each. It has not been possible to find the rest of the book.

Although MS 3c4 is a very attractive and highly decorated manuscript in its original state, an owner chose to make it even more attractive by pasting in 13 cuttings from other manuscripts. MS 3c4 is a Book of Hours written in France in the second half of the 15th century. The Book of Hours has been called “one of the most glamorous and most familiar artifacts of the Middle Ages” (Duffy 2006:3). Books of Hours were very often highly decorated. Although in the first instance a prayer book, it was often just as much an indication of wealth as of piety.

An extensive search through photographs of manuscript fragments on internet websites showed no matches, although there were similarities with the fragments in MS 3c16. Near matches were found in 12th-century fragments from England in the Beinecke library, Yale. Near matches were also found in the national library of Finland, especially fragment F.m. 1.26, which I examined in Helsinki. It has been dated the second half of the 12th century and the provenance given as England or France.

In 2010 a cartographer discovered two choirbook fragments in the National Library in Pretoria. Although each fragment consists of two attached pages and the script and the notation on the two fragments are similar, they do not derive from the same manuscript. The one fragment, with each page 545 mm x 394 mm, contains four sancti, the other fragment, with each page 546 mm x 376 mm, contains two hymns. The first sanctus can be found in Thannabaur’s catalogue (1962) as melody 72. According to Thannabaur the melody is rare and he gives only two sources for it, both in Udine, Italy, the one a 15th-century German Kyriale in Udine Biblioteca Capitulare, the other a 15th-century gradual from Aquileia in the Udine biblioteca arcivescoville e Bartoliana (Thannabaur 1962:180). Sanctus 2 is widely distributed, but it also appears in the same gradual from Aquileia. The third sanctus lacks an incipit and could therefore not be found in Thannabaur’s catalogue. The second fragment contains two hymns; the one for the first Sunday of Easter and the other for Sunday after Easter Sunday. Both hymns appear in the Analecta Hymnica Medii Aevi, vol. 51. According to this source they are both widely distributed. The fragments are mostly liturgical chants and they have been discussed in that context. 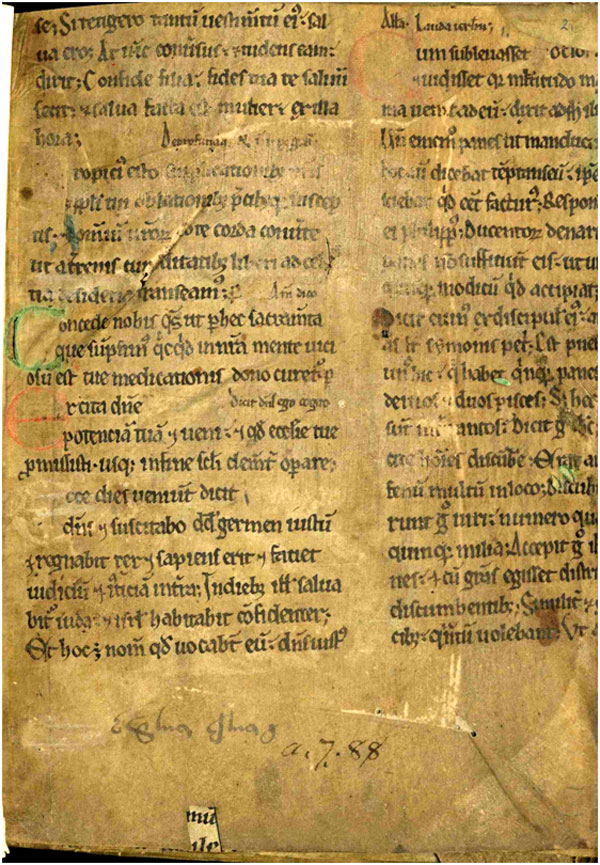 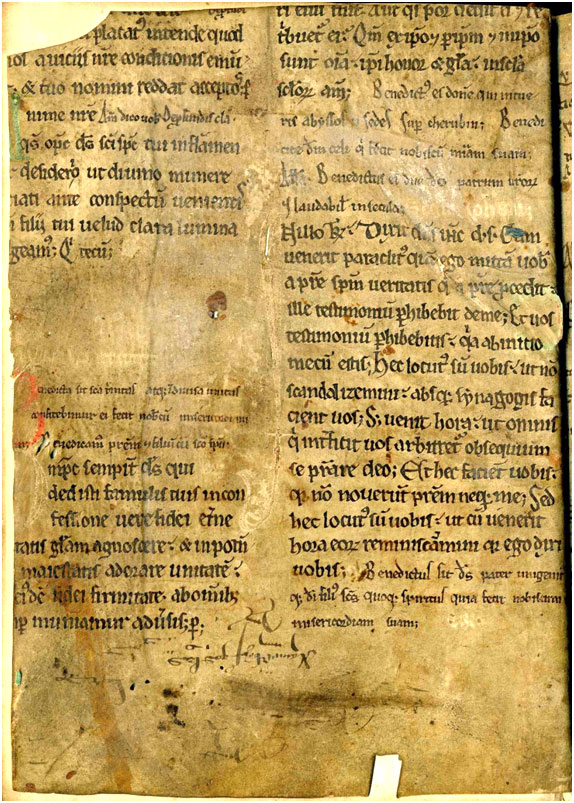 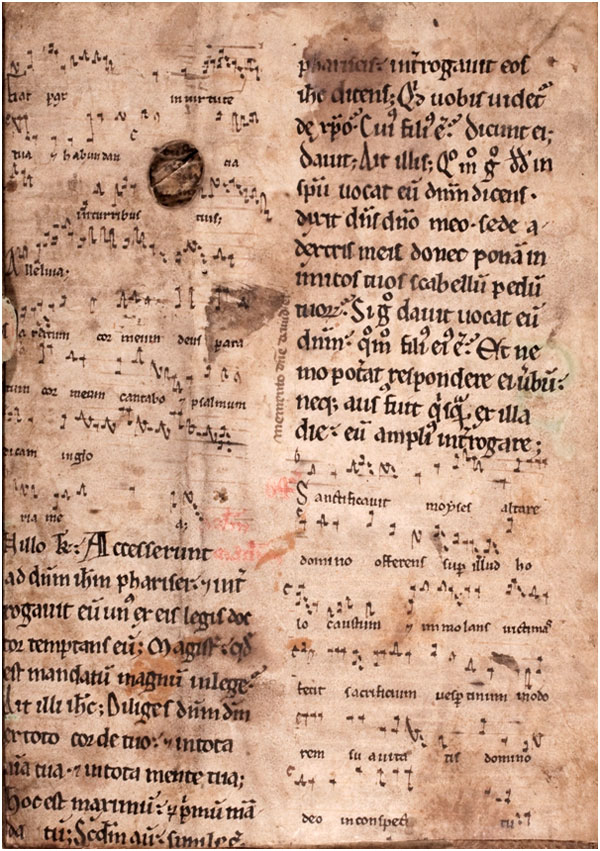 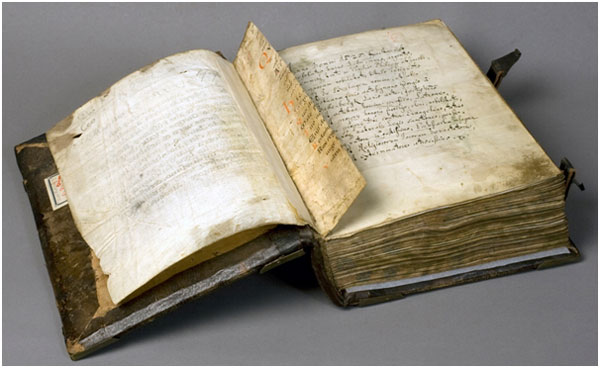 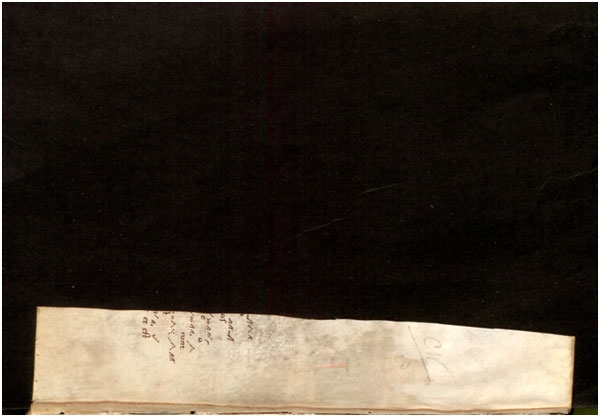 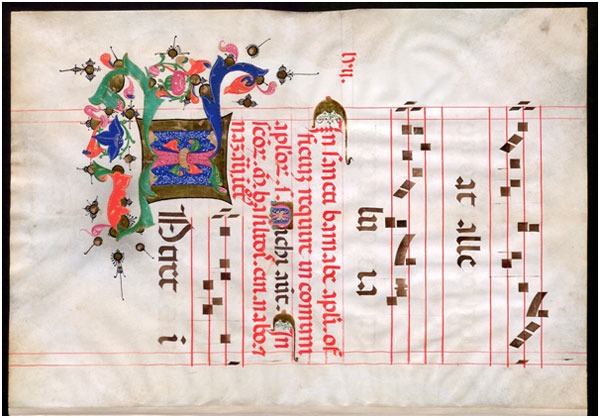 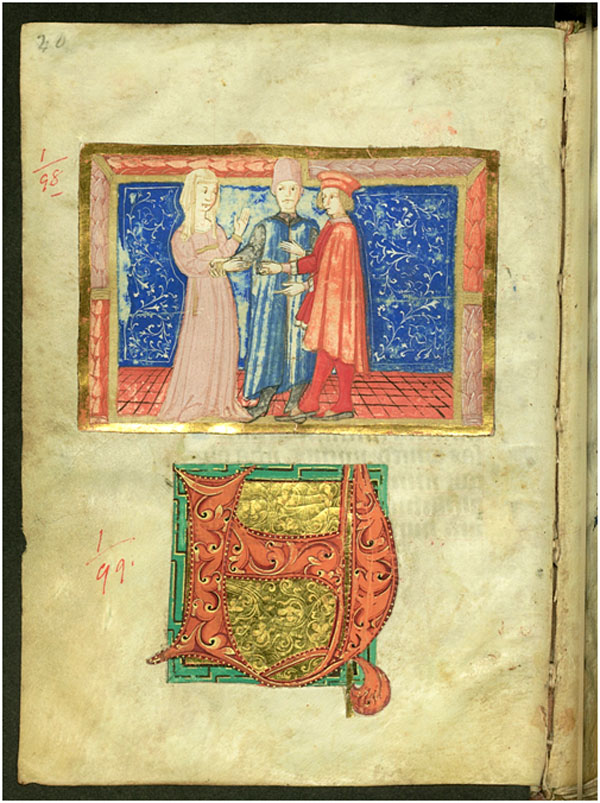 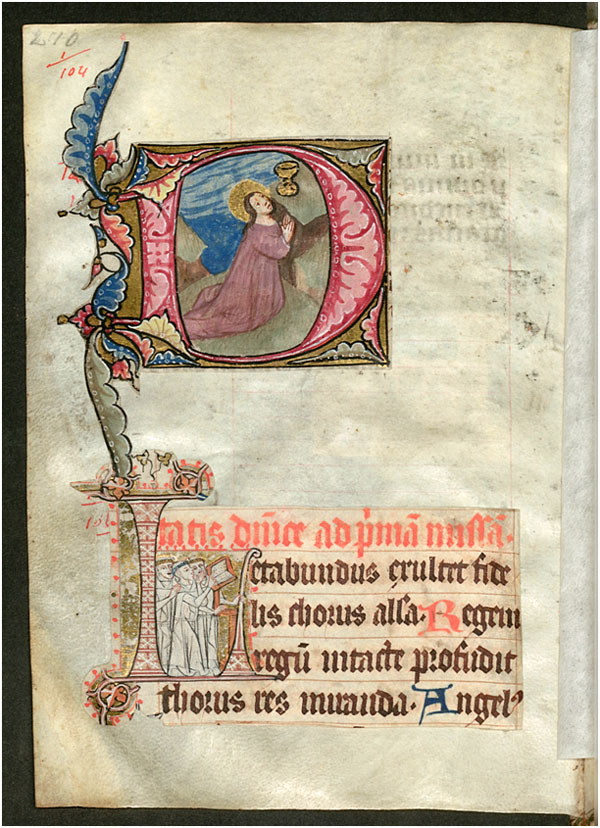 Bielschowsky, L. 1949. The Amorbach evangelistarium: a note on provenance (MS Grey 4.b.3). Quarterly Bulletin of the South African Library, 3:76–9.

Candelaria, L. 2008. The mystery of the Rosary Cantorales: a study in attribution. http://ism.yale.edu/sites/default/files/files/The%20Mystery%20of%20the%20Rosary%20Cantorales.pdf (12 April 2016 geraadpleeg).

Casson, L.F. 1959/60. The medieval manuscripts of the Grey collection in saleroom and bookshop. Quarterly Bulletin of the South African Library, 14:3–33.

Frederici, C. 1985. From book to binding and back: medieval manuscript fragments in Norway. http://www.palaeographia.org/glm/art/ommundsenl.htm (4 Julie 2015 geraadpleeg).

Hughes, A. 1982. Medieval manuscripts for mass and office. A guide to their organization and terminology. Toronto: University of Toronto Press.

Ottosen, K. 2008. The responsories and versicles of the Latin office of the dead. Regula liturgy of the Franciscan order. Books on Demand. www.booksondemand.com (28 Julie 2015 geraadpleeg).

Shailor, B.A. 2003. Otto Ege. His manuscript fragment collection and the opportunities presented by electronic technology. The Journal of the Rutgers University Libraries, 55:1–22.

Steyn, F.C. 1990. A study of an unkown gradual with a collection of sequences in the Grey collection of the South African [National] Library, Cape Town. Manuscript Grey 7a27. Ongepubliseerde M.Mus-verhandeling, Universiteit van Suid-Afrika.