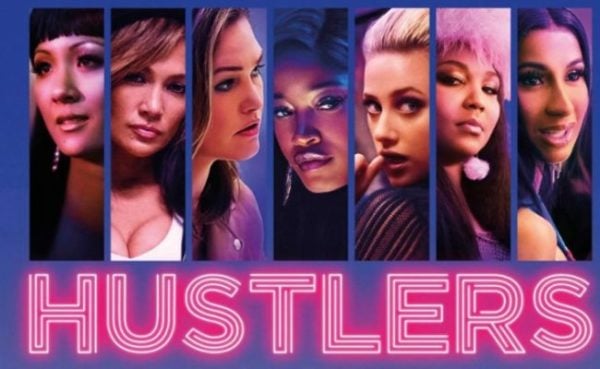 What a remarkable surprise this film turned out to be. The trailer shrewdly sold it as a comedy, with some inconsequential drama thrown in. Casting Jennifer Lopez, with her fluffy film history, only added to the expectation of it being a frothy romcom. Just with strippers. Nothing too gruelling – a Friday night film that would fill the seats. Surprise! It’s a gritty drama, an all-out condemnation of the greed of men, with rather great comedy thrown in – and yes, with some strippers. Oh, and believe you me, JLo is a revelation as Ramona Vega.

Early on, you are treated to a wintery rooftop scene of a larger-than-life Ramona in a bikini draped atop a fur coat, smoking a cigarette. Dorothy (Constance Wu), as plain and awkward as the name suggests, stands shivering to one side. She has forgotten her (non-fur) coat inside. Ramona opens her legs and coat, and welcomes Dorothy “into her fur”. Ramona lights Dorothy’s cigarette, tells her she is gorgeous and agrees to show her the ropes. The friendship is sealed, and so is the drama that follows. This particularly luscious scene sets the tone for the rest of the film. On a more obvious level, it is a larger-than-life tale about big money, greedy Wall Street men and sexy women either in very little, or in heels – and, yes, fur coats. On a deeper level, the scene embodies women who struggle in a system that is stacked against them, women who stand together and forge comforting and forgiving friendships that will outlast any boyfriends, drama or betrayal.

The editing elevates the film even further. In one sequence, Dorothy rushes home after a particularly harrowing night. She runs up the steps, finds the house empty, sees the nanny’s note and runs to the neighbour. She picks up her daughter, races to the school and hobbles on nine-inch heels past a few judgemental mothers to drop her daughter at the front gate. All of this while her white T-shirt and stomach sport a smear of someone else’s blood. She is constantly on the run, trying to survive. The film also uses a number of gobsmacking montages, for example, the camera cuts between the dogs of Wall Street at the office and at the strip club. Their behaviour, whether at work or at play, is sufficiently vile.

Constance Wu, best known for another frothy romcom, Crazy rich Asians, plays a demure Dorothy, and her grounded, underplayed performance is a great anchor for the larger-than-life Ramona. Which brings me to JLo. Good Lord, I don’t know who she will be up against in the category for Best Actress, but just give her the Oscar already. The above-mentioned bikini on a fur coat scene will go down in the annals of cinema as one of the most iconic scenes ever shot. (And, face it, with The handmaid’s tale breaking all the moulds in terms of epic scenes, films need to catch up.) Yes, it was visually arresting, and JLo is obviously beautiful, but what holds your attention, what hooks you, is Lopez’s subtle performance in this scene and throughout the film. She is warm, she is genuine, she is powerful and she runs the gang of girls like a mob boss. She is their mother, their pimp and their best friend. As the story progresses and you come to see her dark side, Lopez switches gear very subtly. I only noticed the change in behaviour during the second screening. She becomes less elegant, more of a caricature. Her facial expressions, when lighting a cigarette, for example, become a little vulgar. Here’s to hoping JLo will choose more roles like Ramona Vega.

The closing scene is pure perfection, and sums up what this movie is all about. Ramona, being interviewed at her new day job, is looking a bit more everyday, and less stripper-in-fur. She says America is a strip club. Some people are throwing money. Some people are doing the dancing. That “some people” would be mostly women.