Thunderous applause erupted in the Artscape Theatre in Cape Town, as upcoming director and playwright Lwanda Sindaphi received not only one award, but three awards, at the recent Fleur du Cap Theatre Awards, for his play, Kudu.

These awards were Best New South African Script, Best New Director, and Best Performance by an Ensemble for the cast of Kudu. The winners are chosen from productions performed at professional theatre venues in and around Cape Town, and this year, a total of 87 diverse productions were reviewed and were eligible for consideration.

Kudu is a play that is set in the year 2030. In the play, the Xhosa nation has taken over the Eastern Cape in an attempt to utilise the land for their own prosperity. Three Khoi descendants and their aging cow are migrating to the Eastern Cape. Drama ensues when they come to a poverty-stricken community once ruled by the Khoi chief, Ndoda. The Khoi descendants, having heard stories of how Chief Ndoda was killed in a land dispute, have come to reclaim what is theirs – to reclaim from the Xhosa the land, as well as their customs, culture, language and spirituality.

Where did the inspiration for Kudu come from?

Kudu is a play that wrote itself, because the events that happened in my life prior to its existence were both emotionally and intellectually stimulating. In 2014, I went to the Eastern Cape, to Fort Beaufort, to send my grandfather to the ancestral world by slaughtering an ox. In the process of preparing for the ritual, I discovered that my home was rebuilt a few metres away from where it had been before the family dispersed, while his grave was in its original place. When the Xhosa bury their own, they hide their bodies in the kraal, garden or yard. So, having a grave that was too far from our home created a distance between the living and the dead. And, the family was angry towards the municipality for demolishing our home and for building a community hall in its place. Every time we performed rituals, we had to go through the old home and tell the world of the ancestors that we didn’t stay there anymore. In 2015, when I flew to Dubai with War horse, in my room I woke up with my face drenched with tears. I was dreaming of my grandmother, who was crying for the old home and her husband, and her pain manifested itself through my body. In the same year, my daughter, Azania Swartz, was born to a “coloured” woman. Her arrival was maliciously racialised by purists, who constantly questioned us about her identity. From then, I knew that her future would always be racially hostile in every space she occupied. Questions of race in post-colonial South Africa are based on multiplicity, but there will always be those who claim singularity. When I conceptualised Kudu, I was trying to respond to the question of longing for land, and how our multiple identities are the manifestations of where we come from. 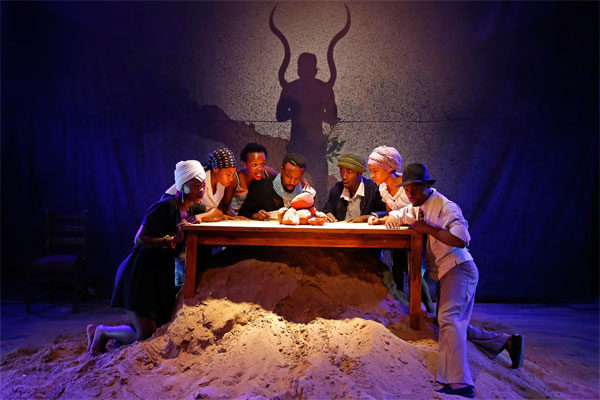 A scene from the play Kudu

What were the challenges of bringing Kudu to life?

Kudu is a palimpsestic performance in space and time that centres the body as its tool to convey the story. It was extremely challenging to make the present and the past one thing, yet make clear that the times were different. Coming from a literary background challenged me to think about the text in other creative ways. I didn’t just want to write a text-driven narrative, but I wanted to centralise the body and equate its presence to objects and materials. This idea of centralising the body in my performances is strongly influenced by my background in physical theatre. I was trained at Magnet Theatre, and that is where I created Kudu. So, the body is what we use to tell stories. One of the challenges was to balance facts (historical) and myth (visceral). Ntaba KaNdoda is an existing mountain with a rich history. Initially, I wanted to write historically but facts do not make good theatre. So, I had to dig from my own personal truth and impart that knowledge to the performers. It was difficult to find the “concrete language”. Antonin Artaud said that there is a language (concrete language) before the language (spoken text), and that is what moves the audience. I wanted to create a visceral performance that was free from text, but make sure that the story was clear by using poetic text. This juxtaposition was difficult to execute, but having mentors like Professor Mark Fleishman and Jennie Reznek really helped.

What were the highlights of directing Kudu?

Kudu is a play that was not expected from me. I still remember that at the opening at Magnet Theatre, many people kept asking whether I had really written and directed the show. They were mesmerised. They knew that I was capable of doing so, but it was too soon. My highlight was digging from self and reaching for unfathomable truths. These truths created debates among spectators. 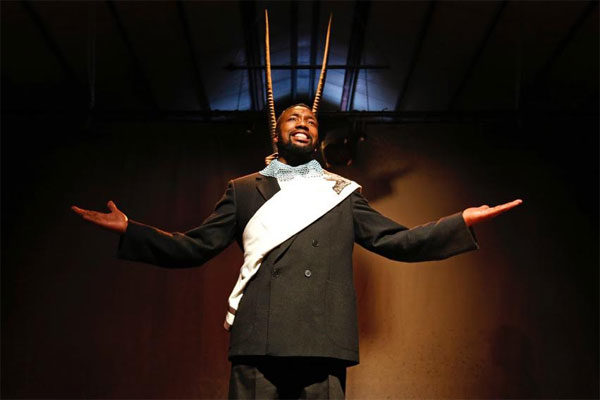 A scene from the play Kudu

What advice do you have for people who want to follow a career in theatre and the arts?

I think the danger in post-apartheid South Africa is following trends. Theatre-makers should constantly question themselves about what multiplicity, interculturalism, decolonisation or any form of oppression means to them. Make your own meaning(s). Make sure that you read and read and read and dissect trending politics. Trending politics have no depth. Everybody knows them. When we make theatre, we expose and offer a different lens. You can never offer that different lens if you don’t spend time reading books, watching theatre, attending exhibitions and indulging in constructive debates. If you want people to recognise you, bring your own new language. The first person to satisfy when making a good piece of theatre is self. You can heal the world by digging from your own truth. Your truths are human truths. One last thing is going to school. Knowledge is boundless. Devour everything, so that you can prepare yourself for the future.

What does the future hold for you?

I am currently pursuing my honours in playwriting at UCT. I would like to contribute to the vast ocean of theories. It seems that I will study until I get a PhD. The future is academia.