The low throughput rates that occur especially at South African universities are an alarming phenomenon that has a negative impact on the country's economic growth and social development. Several factors, such as the inability of students to work and think independently, poor time management, a lack of study skills, incompetence regarding the language of instruction, and inadequate teaching and learning support at universities may contribute to this problem. Poor throughput rates result in a situation where only a small percentage of qualified students will be available for the labour force. One of the possible causes for the low throughput rate might be nested in the school setting, where many secondary schools throughout the country still persist with rote learning. At university students are responsible for their own study momentum and outputs, which obviously require better management of certain motivational factors and learning strategies.

Goal orientation refers to the different ways in which students approach certain learning situations and get involved in these and how they react in different situations. Goal orientation is one of the key aspects of self-regulated learning. Students must set specific learning goals in the process of self-regulated learning that will contribute to the achievement of academic success.

Task value is linked to the task that will contribute to the likelihood that an individual will choose the task. Task value is also seen as the student’s perception of the course material with respect to how interesting and important the content is. Tasks that are perceived as valuable are associated with a wide range of motivational outcomes, including better academic performance.

Self-efficacy is a self-assessment of a person's ability to master a task successfully. High levels of self-efficacy help students to undertake difficult tasks and to persevere in achieving intrinsic goals, including the judgement of a person's ability to complete a task, as well as the confidence that the person has in his/her own skills to accomplish this. Students who have a high level of self-efficacy can also monitor their own work time better.

Success expectancy is one of the motivating factors that lead an individual to believe that he/she possesses the ability to complete a task successfully. Students with high expectations of success are more likely to be focused and achieve better academic performance.

Test anxiety is a state of discomfort or feeling of uncertainty during a one-time or continuous assessment programme. Acceptable levels of test anxiety can motivate students to work harder, which can lead to positive academic results. Test anxiety is being increasingly noticed in students and it may be attributed to the more prominent role that assessments play in the education system compared with a decade ago.

The motivation of students is an important issue in the higher education sector, especially in view of the role that academic achievement will play in their professional lives. In the university context it is the reason why a student perseveres in working towards a particular goal. Motivation influences why and how students learn and how this influences their academic achievements. Several authors believe that students' motivation increases when they believe that they have a degree of control over their learning. Motivation is consequently essential for the students in order for them to apply strategies that will influence learning processes. Some researchers believe that students may apply different motivational strategies in different learning situations.

Rehearsal is effectively used for simple tasks like storing information to be learned in the working memory by processes such as naming, repetition and presentation. It is assumed that this strategy affects the attention and encoding process but does not seem to help students to draw connections between pieces of internal information and it does not help to integrate new information with prior knowledge.

Elaboration strategies such as paraphrasing and the making of summaries and notes are seen as active strategies that help students to make internal connections between new information and prior knowledge. The elaboration strategy goes beyond the content in question and enables the student to gain additional information by, for example, using new words, drawing connections, using analogies, making comparisons and writing down questions.

Organising is considered as involving activities of review and restructuring of existing learning materials. Students can consider the current structure of the content as irrelevant and design alternative structures to make the content more applicable. Examples are the design of tables, classification, regrouping, the design of content cards and linking various aspects.

Critical thinking strategies involve purposeful thinking where individuals systematically apply criteria and intellectual strategies to shape their thinking. Critical thinkers are usually outcomes-driven, open to new ideas, flexible, willing to change, innovative, creative, analytical and informed. Students that apply critical thinking skills are more excited about their work, ask more questions and do not readily accept the answers to the questions. These skills seem to advance their academic and career success.

Metacognitive strategies are related to the students' awareness of their own capabilities in each study area. The students evaluate their own performance and try to come up with better ways of studying. Self-criticism, responsibility, personal reflection, individual monitoring and changing study habits are only a few examples of these strategies.

Time management encompasses scheduling, planning and management of the study. This includes not only the scheduling of defined times for study, but also the effective use of study time and setting realistic goals. Time management varies from daily and weekly to monthly study periods and has an impact on academic performance that seems to improve when students apply effective time management skills.

Additional efforts include efforts management, peer learning and help-seeking. Efforts management refers to the students’ ability to monitor their efforts to regulate uninteresting tasks. This strategy is important for academic success because it promotes not only goal achievement but also the regular use of learning strategies.

Peer learning can have a positive effect on academic performance. Discussions help students of the same peer group to gain insight into the learning matter that they could not obtain alone. Help-seeking implies that students learn to manage the assistance they receive from others. This includes help from both peers and teachers. Committed students know when they do not understand the work and can identify someone who can help them.

Statistics on throughput rates of students in South Africa show that only 35% of first-year students who enrol full-time for a degree graduate within the prescribed time, while only 48% graduate within five years, but it is estimated that about 52% of the intake will never graduate, even after repeated attempts. The overall objective of this study was to compare the application of motivational factors and learning strategies by first-, second-, third- and fourth-year EMS education students between the year groups and with the students' academic performance in the first to fourth year. The theoretical framework encompassed the motivational factors as well as learning strategies already discussed that play a role in academic performance. These variables were investigated by means of a quantitative, exploratory and descriptive empirical study using the above-mentioned MSLQ. The questionnaire included two sections, namely a motivational factors section of 35 items and a learning strategies section of 50 items. The study focused only on the constructs that were found statistically reliable. Questionnaires were personally and manually distributed by the researcher. During an introductory session the procedures were explained, the questionnaires were completed and returned. The total response rate of usable questionnaires was 62%.

Results regarding the motivational factors indicated that students of all four year groups experienced test anxiety to a lesser extent, while they showed a higher degree of success expectancy. Regarding learning strategies: critical thinking and metacognition were applied to the smallest degree, while organising was applied to the highest degree mainly by the second-year students. Relationships between motivational factors as well as learning strategies and academic achievement were determined. Statistically and practically significant positive relationships with a medium effect (p<0,05; r>0,3) were found between academic achievement and goal orientation at first-year level; self-efficacy, organisation and time management at the third-year level and success expectancy at the fourth-year level. Only one statistically and practically significant positive relationship with a large effect (p<0,01; r=0,5) was found between academic achievement and success expectancy in the fourth year.

As the results of this study revealed that none of the motivational factors or learning strategies was extensively applied, it was recommended that academic support should be offered to students by means of, among others, help from facilitators, academic support modules, extra attention to risk modules and peer learning. Academic support at higher education institutions should not be generic in nature, but subject specific, because specific terms, concepts and situations should be understood well. In order to offer remedial techniques lecturers must be aware of the extent to which students apply motivational factors and learning strategies. This can be tested by means of a questionnaire at the beginning of the year. Lecturers must also be aware of the relationships between motivational factors as well as learning strategies and academic achievement of their students in order to encourage the application of under-employed factors and strategies. 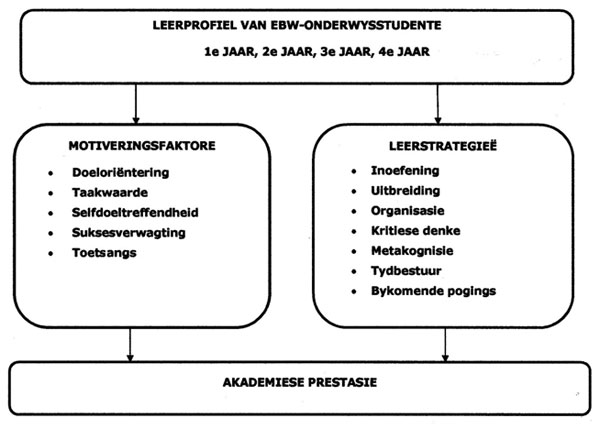 Ali, I., M.A. Khan en K. Hamid. 2010. A study of university students’ motivation and its relationship with their academic performance. International Journal of Business and Management, 5(4):80–8.

Clayton, K., F. Blumberg en D.P. Auld. 2010. The relationship between motivation, learning strategies and choice of environment whether traditional or including an online component. British Journal of Educational Technology, 41(3):349–64.

Georg, W. 2009. Individual and institutional factors in the tendency to drop out of higher education: A multilevel analysis using data from the Konstanz Student Survey. Studies in Higher Education, 34(6):647–61.

Higgins, B.A. 2000. An analysis of the effects of integrated instruction of metacognitive and study skills upon the self-efficacy and achievement of male and female students. Ongepubliseerde MA-verhandeling, Universiteit van Miami.

for promoting insightful learning in science. International Journal on new trends in education and their implications, 4(1):165–72.

Junio-Sabio, C. 2012. Importance of academic support services: An assessment by the students in Oman. International Journal of Information Technology and Business Management, 3(1):14–23.

Kaushar, M. 2013. Study of impact of time management on academic performance of college students. Journal of Business and Management, 9(9):59–60.

Kummin, S. en S. Rahman. 2010. The relationship between the use of meta-cognitive strategies and achievement in English. Procedia – Social and Behavioral Sciences, 7:145–50.

Shkullaku, R. 2013. The relationship between self-efficacy and academic performance in the context of gender among Albanian students. European Academic Research, 1(4):467-78.

Sikhwari, T.D. 2014. A study of the relationship between motivation, self-concept and academic achievement of students at a university in Limpopo Province, South Africa. International Journal of Educational Science, 6(1):19–25.

Singh, K. 2011. Study of achievement motivation in relation to academic achievement of students. International Journal of Educational Planning and Administration, 1(2):161–71.

Trifoni, A. en M. Shahini. 2011. How does exam anxiety affect the achievement of university students? Mediterranean Journal of Social Science, 2(2):93–100.

Yong, F.L. 2010. Study on the self-efficacy and expectancy for success of pre-university students. European Journal of Social Sciences, 13(4):514–24.