Parasitologists are most likely the only people that get excited by discussions on tapeworm! For most people the mere notion of tapeworm infections is gross, the first thought usually involving undercooked pork. Taenia solium may indeed well be the best-known tapeworm, yet this genus also comprises several other species. They all share similarities when it comes to the life cycle, which is described as being indirect. This implies that two hosts are involved: the first a final host containing the “adult” parasite (i.e. scolex behind which segments form and develop) and the second an intermediate host containing the larval stage. Once again T. solium serves as a good example. The “adult” worm may be 2 to 7 metres long and resides in the small intestine of infected humans. As proglottids develop from behind the scolex, the oldest, most developed proglottids are right at the end of the worm. These contain eggs and when fully developed the proglottid is expelled with the host faeces. Pigs ingest the proglottids and/or viable eggs which “hatch” to form oncospheres. The latter penetrates the intestinal wall and is distributed to muscle tissue (i.e. “measles”) through blood and lymph flow. Should a human ingest viable eggs, oncosphere development would progress as it would in an intermediate host, which may lead to cyst formation in various tissues (e.g. liver and brain). As mentioned before, several species of Taenia exist, but for the purposes of this manuscript the focus will be on those found in cats and dogs. Work by Verster (1969) and a subsequent review by Loos-Frank (2000) implicates the following species within a South African context: T. hydatigena, T. multiceps, T. ovis ovis, T. pisiformis, T. serialis serialis, T. serialis brauni and T. taeniaeformis. The latter occur in felids only, while the rest are found in canids. All the representatives from this genus possess two sets of hooks used for attachment. Measurements of these hooks are also used for taxonomic purposes (i.e. species identification).

The question arises whether the same Taenia spp. that occurs in dogs also occurs in wild canids (e.g. jackal) or felids (e.g. caracal) and if so, to what extent. Archaeological evidence indicates that domestic dogs (Canis familiaris) are not endemic to Africa. They were brought into Egypt from Europe approximately 7 000 years ago (Gallant 2004) and distributed through Africa from there. The jackal (Canis mesomelas) often shares the same parasite and diseases with domestic dogs (Price en Karstad 1980; Walton en Joly 2003; Loveridge en Nel 2004).

During this preliminary survey, ClinVet International (Pty) Ltd archive material was examined to investigate what Taenia spp. is commonly found in domestic dogs in South Africa (mainly from the Grahamstown area in theEastern Cape). With the aid of the Free State Sandveld branch of the South African Hunters and Game Conservation Association (SAHGCA) a number of jackal and caracal carcasses were obtained from the Bloemfontein area (Free State) and examined for the presence of tapeworm.

Obviously the geographical areas are very limited and not at all representative of conditions in greater South Africa. Furthermore, the amount and quality of material and hence data was not suitable for intensive statistical analyses. It was, however, adequate for defining and investigating the following aims in this pilot study: (1) Identify what Taenia spp. occur in dogs in South Africa and compare that to species found in jackal. (2) Identify Taenia spp. found in caracal and compare that to species found in dogs and jackal. (3) Discuss variation in measurements of hooks and discuss implications for identification of specimens examined.

Measurements of hooks from Taenia spp. recovered from dogs were obtained from the archives of ClinVet International (Pty) Ltd. Taenia spp. tapeworm were also collected directly from the small intestines of jackal and caracal. Visible worms were removed and the mucosa was lightly scraped and strained, and the washing examined for scoleces. All parasites were preserved in 10% formalin. Subsequently the rostellum containing hooks were carefully cut off from each scolex and mounted in lactophenol (alternatives for use in future studies are Berlese’s or Hoyer’s media). With the use of two needles the rostellum was manipulated to obtain a suitable orientation before placing a cover slip over it. The edges of the cover slip were sealed with clear Cutex. The respective lengths of the long and short hooks (five of each for each parasite examined) were measured using a measuring eye piece. The average lengths were subsequently used for identification purposes.

Comparatively few of the specimens collected from 18 jackals (14 out of 112 Taenia spp. worms collected) were suitable for purposes of species identification. This was attributed to the fact that degradation of soft tissues in which the hooks are embedded takes place very rapidly, resulting in hooks being lost as carcasses could not be collected immediately. In future studies, intestines should be collected immediately in the field, placed on ice and transported to the laboratory. Out of three Taenia spp. specimens, collected from three caracal, only two were in a suitable condition. Measurements for 24 Taenia spp. specimens from eight dogs were obtained from the ClinVet archives. Subsequent examination, comparison and discussion were restricted to Taenia spp. previously recorded from South Africa as recorded by Verster (1969) and later reviewed by Loos-Frank (2000). The measurement ranges recorded by Verster (1969) were graphically presented for purposes of comparison, but additional measurements and ranges were also tabulated. Results indicate that the majority of Taenia spp. previously collected from dogs belonged to the species T. hydatigena. This is not surprising, as T. hydatigena is a common, cosmopolitan species that has been found in several intermediate and final host species.A number of recovered Taenia spp. specimens are likely to be T. ovis ovis. Both these Taenia spp. also use sheep as an intermediate host. It is very likely that infected sheep tissues (e.g. muscle for T. ovis and liver for T. hydatigena) were removed during rural slaughter practices and then thrown to the dogs to be eaten (or discarded and then later found by dogs).There was also one specimen from the T. multiceps / T. serialis serialis “measurement range complex”and two others that fell outside the measurement ranges defined by Verster (1969). This largely corresponded to what was found in jackal. However, only two specimens are suspected to be T. hydatigena,while the majority fell into the T. multiceps / T. serialis serialis / T. ovis ovis “measurement range complex”. The hook measurements of three specimens corresponded to those previously recorded for T. serialis brauni. Infection statistics calculated for Taenia spp. from jackal were as follows: Prevalence = 22,22%; Mean intensity = 28,00; Mean abundance = 6,22. While not corresponding to measurement value ranges provided by Verster (1969), it seems likely that at least one Taenia spp. collected from caracal belongs to the species T. taeniaeformis, a parasite of felids using rodents as intermediate hosts. The other Taenia spp. specimen collected appears to be T. hydatigena.

From this preliminary study caracal may thus appear to be infected with Taenia spp. tapeworms associated with both canids and felids. This should, however, be further investigated and confirmed in future studies. Infection statistics calculated for Taenia spp. from caracal were as follows: Prevalence = 66,67%; Mean intensity = 1,50; Mean abundance = 1,00. Variation in measurements of structures for purposes of species identification can be influenced by a number of factors, which may include researcher experience and measurement methodology. In other groups, such as monogenean worms, and more specifically Gyrodactylus spp., morphometric variation became such a confounding factor that the majority of new descriptions are accompanied by molecular analyses. Such protocols have been developed and are well recorded for Taenia spp.

Future studies should employ an integrated approach that would include experimental infections with materials of known species origin, traditional morphometric approaches and molecular analyses.

A number of deductions were made following completion of this pilot study. When examining Taenia spp., material should be as fresh as possible to avoid losing the attachment hooks. The use of different clearing agents (e.g. Hoyer’s medium versus lactophenol) should be investigated in future studies.

There was an overlap in the Taenia spp. fauna of jackal and dogs. As species composition is affected by factors such as geographical distribution and diet, future studies should focus on larger and more representative sampling areas. This should be coupled with socio-economic studies to examine the types of rural slaughtering practices in use and how these further the parasite life cycle. Furthermore, the extent of predation on sheep by jackal should be quantified, after which parasite burdens between jackal and domestic dogs from the same area can then be compared.

It would also appear as if caracal can harbour Taenia spp. found in both canids and felids. This should be further investigated in future studies. Further morphometric studies are also required where various measurement methodologies are compared, combined with experimental and molecular approaches, as previously stated. 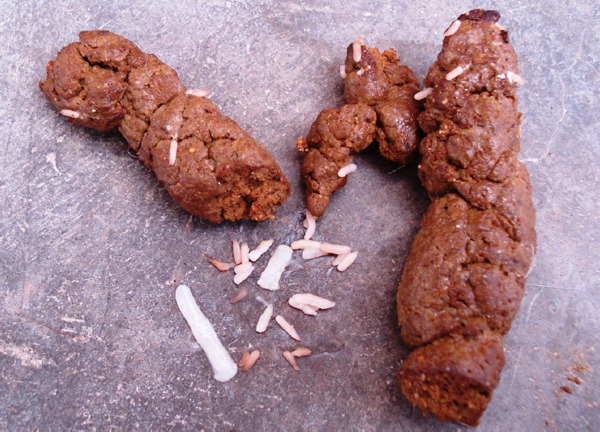 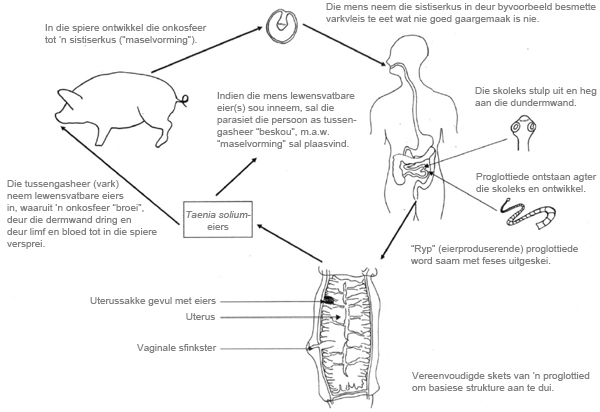 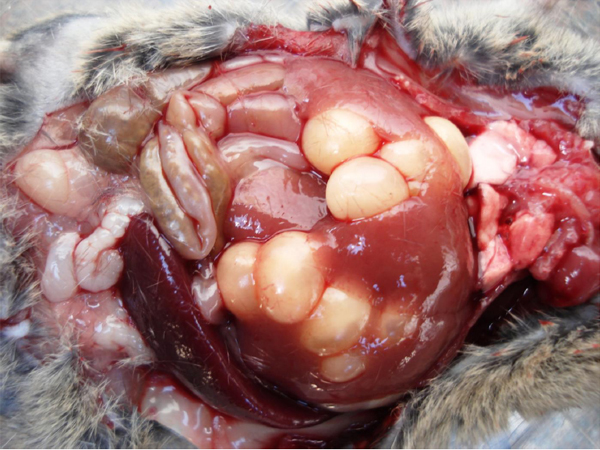 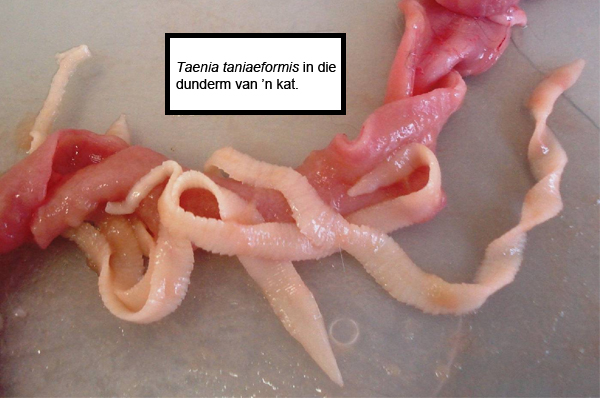 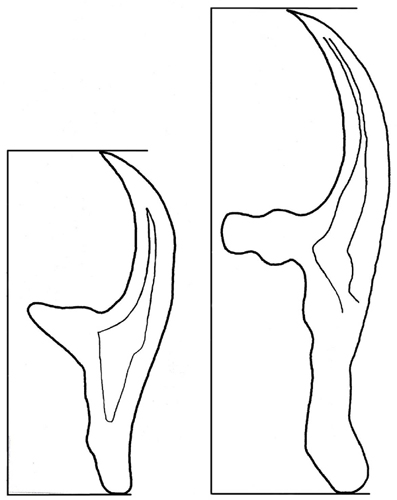 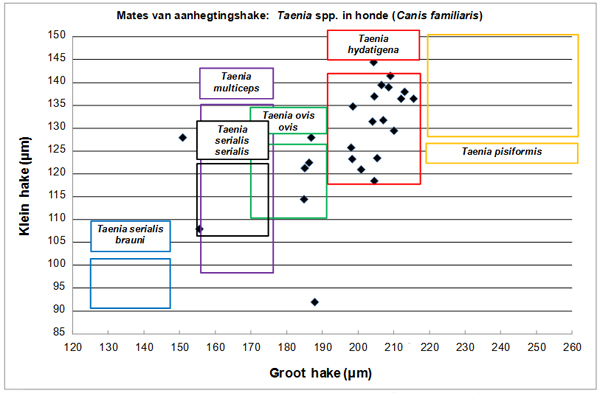 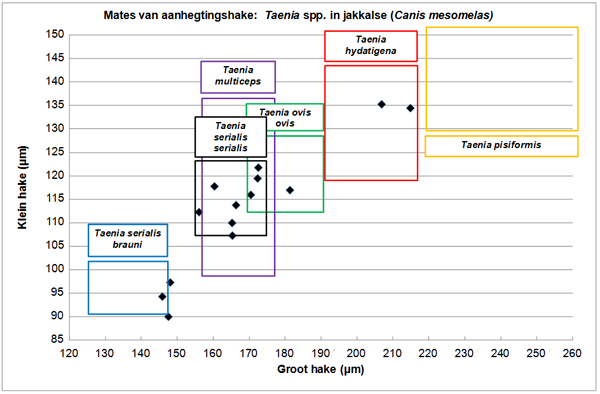 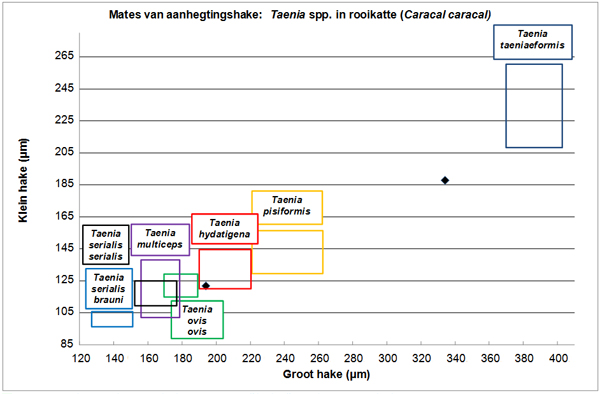 Baker, M.K., Lange, L., Verster, A. en Van der Plaat, S. (1989). A survey of helminthes in domestic cats in the Pretoria area of Transvaal, Republic of South Africa. Part 1: The prevalence and comparison of burdens of helminths in adult and juvenile cats. Journal of the South African Veterinary Association: 60(3), 139–142.

Hodnelen, K. en Nilsen, F. (1994). On the occurrence and morphology of Gyrodactylus pterygialis from Saithe Pollachius virens in a Norwegian Fjord. Journal of Parasitology: 80(6), 938–945.

Lawson, J.R. (1994). Hydatid disease and sheep measles: the history of their control and the economics of a recent change of control policy. New Zealand Journal of Zoology: 21, 83–89.

Mo, T.A. (1991a). Variations of opisthaptoral hard parts of Gyrodactylus salaris Malmberg, 1957 (Monogenea: Gyrodactylidae) on rainbow trout Oncorhynchus mykiss (Walbaum, 1792) in a fish farm, with comments on the spreading of the parasite in south-eastern Norway. Systematic Parasitology:20, 1–9.

—. (1979). Gastro-intestinal helminths of domestic dogs in the Republic of South Africa. Onderstepoort Journal of Veterinary Research: 46, 79–82.