In January 2020 the writer visited Malta, where the famous Great Siege of Malta took place in 1565. On this island the Knights of the Order of St John obtained a famous victory over the Islamic Ottoman Turks of Suleiman the Magnificent, emperor of Turkey. In the past the writer has conducted some research about Michelangelo Merisi da Caravaggio (Pretorius 2013) and has since always wanted to study his painting The beheading of St John the Baptist on the island. When he attended an academic conference there in January 2020 he finally succeeded in doing this. As part of the research process he assembled a summary of the development and history of the Siege, which was published by LitNet (Pretorius 2020, online). The precise development of the Siege and the outcome thereof fall outside the scope of this article, of which the aim is to investigate the origin, context and educational use of Caravaggio’s The beheading of St John the Baptist.

The origin of the Knight of the Order of St John can be traced to a specific moment in European history, namely the rise of the Latin West as a Mediterranean force. Europe, and specifically the territories of France and Spain, had developed the power and methods to resist Arabic expansion in the 6th century (Mercieda 2016:8). After that, it was essential to deploy permanent garrisons in the East, not only to defend the conquered territories, but also to provide protection to the large numbers of pilgrims from Europe that wanted to visit the Holy Land.

The membership of the Order was sustained by recruiting Knights from the different territories of Western Europe, which led to the development of seven language groups (Langues, which means “tongues”) in the Order (Mercieda 2016:10‒1). These language groups came mostly from young noblemen from England, France, Germany, Spain, Italy and Portugal. It is important to note that the merging of all these diverse and nationalistic language groups into well-functioning fighting units must have posed a huge challenge to the leaders and commanders of the Order.

The Siege lasted for three months and it was ended when the Knights attained a famous victory over the Turks. Of the 8 000 soldiers that fought on the Christian side only about 500 survived. As many as 7 000 of them died in bloody and vicious battles. Many of them were killed by Turkish bullets, but the Turks also used arrows, knives, cannons and fire against the Knights. Quite a number of beheadings were also reported. Graham-Dixon (2010) reports about Turkish soldiers who decapitated Christian captives and mounted their heads on poles as a bizarre signal to the other Christians. These Knights had to defend the Christian faith under the most dangerous conditions imaginable. How were these young Knights trained to prepare them to make the ultimate sacrifice?

In the decades following the victory of the Knights there was an increase in the number of volunteers from Europe. They were lured to Malta by dreams of equalling the heroic deeds of the heroes of the Great Siege. They were thoroughly trained by their seniors by using, among other teaching aids, the huge painting The beheading of St John the Baptist by Caravaggio.

The painting (361 cm x 520 cm; Figure 9) was commissioned by Alof de Wignacourt, Grandmaster of the Order in the first decade of the 17th century as an altarpiece for the Co-cathedral of St John because John is the patron saint of the Order. He is also regarded as the first martyr and Knight (Stone 1997:169). Caravaggio portrays this dark act in supreme fashion: The muscled executioner bends over the body of his victim, whose hands are tied behind his back in brutal fashion (Graham-Dixon 2010:377). The executioner has thrown his sword down and has to reach for his knife since the job is not completed.

Why was The beheading required for the Co-cathedral of St John? The novices of the Order of St John listened to sermons in this room (Stone 1997:161; Graham-Dixon 2010:378). It was also the room where the Knights could do private dedications (Stone 1997:161). Apart from this, the bones of the Knights that had sacrificed their lives in the Great Siege were also buried here. In the oratorium the young Knights were trained in the demanding habits of the Knights of Malta and it was drilled into them that they, too, should embrace the idea of a gruesome death in a foreign and distant country. Caravaggio’s altarpiece was designed in such a manner that they could be under no illusion as to what this would entail. A martyr’s death meant everlasting glory with the angels in heaven, but there would be nothing glorious about the death itself. The painting is like a catechism, namely the asking of pertinent and piecing questions: Do you have what is needed to be a Knight of the Order of St John? Are you ready to die? To die in this manner? (Graham-Dixon 2010:378).

Above The beheading a painting by an unidentified artist, The martyrdom of the Knights of Malta at the Siege of Fort St Elmo on 23rd and 24th June 1565 (270 cm X 590 cm; Figure 8), is displayed. It is a picture of the martyrdom of these Knights during the unsuccessful defence of the Fort (Stone 1997:167). The Madonna, the Child and St John the Baptist rest in the upper part while angels spread palm leaves over the heads of the decapitated Knights that arrive in heaven and the martyrs on the battle field. In contrast with the peaceful upper part of the painting the bottom part of it portrays a wave of death and destruction. There are decapitated and crucified Knights in this part. It contains gruesome, fearful and historically accurate scenes and is aimed at moving even the most obdurate to piety (Stone 1997:167).

Integrated with these historical references are specific references to Christian martyrdom (Stone 1997:168). At the top left there are three men tied to a tree and shot with arrows – like St Sebastian. On the right another knight is crucified upside down – like St Peter. To the right of this is a headless corpse, with his head alongside him (Figures 8 and 10). One head in particular seems like an imitation (Figures 8 and 11) of St John in The beheading or even to be competing with it (Stone 1997:168).

This painting was seemingly intended to be used in collaboration with The beheading in an effort “to transform the brash, sword-toting youths of Europe’s nobility into a unified corps of God-fearing Christian soldiers” (Stone 1997:168); it was the perfect educational tool for their training.

The painting’s shocking images were used to inspire shock, faith and heroism in the young knights. The oratorium was built for exactly these sermons, and the two paintings display a memorable, even mnemonic form. One could imagine the young knights reflecting on the two paintings on the altar while being lectured about how their predecessors obtained “crowns of immortality” with their heads (Stone 1997:168).

The impact of the lectures has been doubled because the Oratory is, as mentioned, positioned on top of the original cemetery of victims of the Siege. This cemetery, which still exists in limited form, carries a memorial plate with the names of the Knights that died in the Siege. Because the original entrance to the Oratory was not through the main church, the novices had to march over the bones of the deceased martyrs of 1565 (Stone 1997:168). The didactic, memorial and ceremonial value of The martyrdom functioned in symbiotic partnership with Caravaggio’s The beheading to train the novices in the nature, spiritual environment and circumstances of a cruel, bloodthirsty death.

The beheading was completed in mid-1608. It was a huge success. Alof de Wignacourt was very impressed by it, and he awarded Caravaggio with a golden chain and gave him two slaves. He now was what he had always wished for: an important man on Malta (Graham-Dixon 2010:385).

This situation would not, however, last. Within a few weeks, in August 1608, Caravaggio became involved in a serious attack on a fellow Knight, Giovanni Rodomonte Roero (Graham-Dixon 2010:387). On 28 August 1608 he was thrown into the jail in Fort St Angelo. He escaped in almost superhuman manner, but on 1 December 1608, in his absence, he was defrocked and called “a rotten and deceased limb” – in front of his own painting (Graham-Dixon 2010:391–2).

Caravaggio was a fugitive once again. 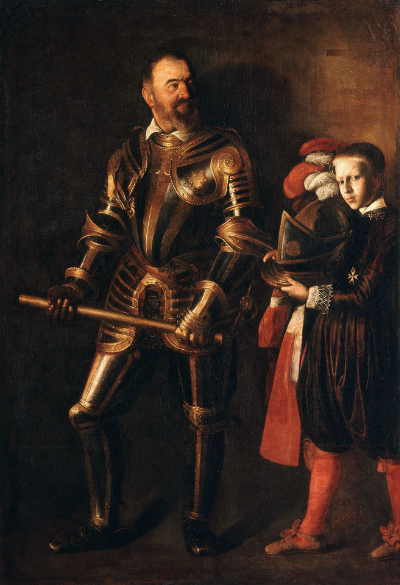 Allen, B.W. 2015. The Great Siege of Malta. The epic battle between the Ottoman Empire and the Knights of St John. Libanon: ForeEdge.