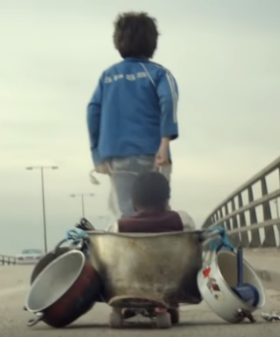 Capernaum, winner of the Grand Jury Prize at the Cannes Film Festival, tells the story of Zain, a streetwise Lebanese boy, who sues his parents for the “crime” of giving him life. The film follows Zain as he flees his negligent parents, survives through his wits on the streets, takes care of Ethiopian refugee Rahil (Yordanos Shiferaw) and her baby son, Yonas (Boluwatife Treasure Bankole), is jailed for a crime and, finally, seeks justice in a courtroom. Capernaum was made with a cast of non-professionals playing characters whose lives closely paralleled their own. Following her script, Labaki placed her performers in scenes and asked them to react spontaneously with their own words and gestures. When the non-actors' instincts diverged from the written script, Labaki adapted the screenplay to follow them.

Capernaum is a stirring take on poverty, child abuse and overpopulation. It won’t traumatise you or leave you despondent, though. Director Nadine Labaki has provided enough beauty and humour to balance out the dark, without taking away any of the horror, or making the film sentimental. That is an achievement.

The opening aerial shot of the shanty town with tyres on roofs that can be blown away, gives you a glimpse of the chaos, before pulling you down into it and keeping you there for two hours. You are supposed to feel overwhelmed, crowded and at a loss. So, when Zain goes for a ride on a Ferris wheel, and is for the first time elevated above his circumstances, both you and he gasp for air when he catches a glimpse of the open sea, a promise of space and calm.

The shots are warm and sunbathed when necessary, but choppy and claustrophobic when it is called for. The minimal use of music, and the focus on the sounds of the city, is a treat in modern-day cinema, where violin and piano are used as crutches to keep the emotions up. Labaki uses a simple story and incredible actors to move you.

There is imagery that will stay with you for a long time: the family sitting on the floor and pummelling prescription drugs into powder to mix with water and later sell; the youngest sibling, a mere baby, chained to the bed.

The family visits an older sibling in prison. While they are in the queue, a cousin calls out from within. Zain’s mom asks: “Are all your brothers with you?” The cousin says, “Yes.” Her answer? God bless? At least, he has his brothers with him – but, in jail.

Zain mounts a pot on a stolen skateboard, loads Yonas in and pulls him across town to find the baby’s mom. The two end up sitting on a sidewalk eating shawarma.

A desperately hungry Zain hangs around another shawarma bar. When, out of kindness, a man offers him the one thing he needs, food, he cowers like a wounded animal.

Zain changing Yonas’s nappy with dishwashing gloves is a gem.

[Mild spoiler alert:] The fact that 12-year-old Zain is no longer a child, but the only adult in the household who has a moral compass, is quite clear when his sister’s period starts. While she waits on the loo, he washes the blood out of her shorts and folds his T-shirt into a makeshift sanitary pad. Why does he swear her to secrecy? If their mother finds out, she will trade her as a child bride for a few chickens.

As I said before, it deals with grave issues, and Capernaum will move you, but it will not crush you.