One of the major drawcards of this year’s visual arts programme during Woordfees, is a group exhibition that celebrates the work and legacy of Dutch painter Hieronymus Bosch. 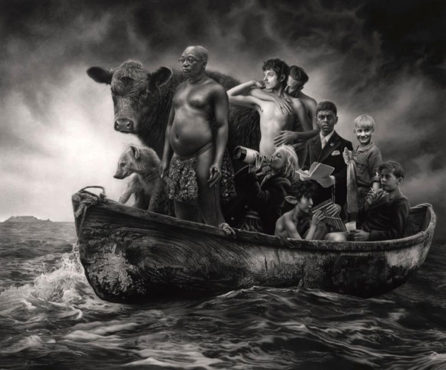 Ship of fools by Ruan Huisamen

“The strange and fecund imagination of Bosch has mesmerised and intrigued me for the past 33 years,” remembers Hanekom.

“I was around 12 when I first discovered Bosch's great altarpiece, The garden of earthly delights, in my stepmother's copy of Art through the ages. 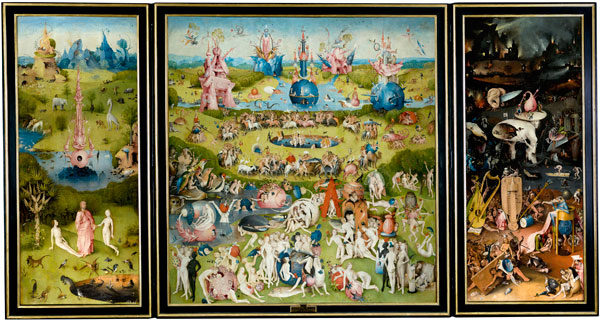 The garden of earthly delights by Hieronymus Bosch

“If one compares Bosch, for example, to Leonardo da Vinci, it is almost inconceivable that the two artists were contemporaries. Da Vinci was very much an artist of his time. He dreamt of the future as an intellectual visionary, in terms of speculative scientific ideas.

“To Bosch, there was no real past, present or future for man. To him, humankind was, and always would be, in a state of eternal purgatory.”

Hanekom describes Bosch's work as the visual arts equivalent of the Rosetta Stone, with his artworks signifying a conjunction between imagination, observation and piety.

“Piety in a sixteenth century context, meaning what we would now call social consciousness. There is no distinction in Bosch's world between the ‘real’ and the imagined. It is all the same thing, bound together by the artist's spiritual convictions. Bosch is the closest approximation the art world has produced to a Biblical ‘prophet’. And how can one ignore a prophet?”

Hanekom selected artists for Bosch in Africa based on who she considered to have the same obsessive singularity of execution and "creative mania" that underscores the visual narratives of Bosch's artworks. 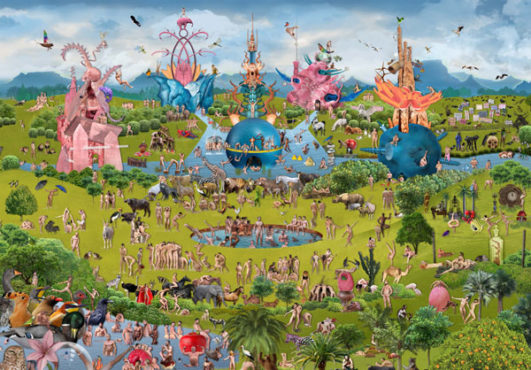 “Artists that really ‘do creative battle’ in their artworks. Artists that do not resort to intellectual ‘glibness’ or mere visual trickery. I needed artists who were not only very much connected to their own working methodology, but who would also proverbially string themselves up by their subjective creative guts in an attempt to try and gauge the depths of Bosch's mind through their own works.”

It takes an artist of incredible nerve, she reckons, even to attempt to scratch around in the mind of Bosch and not lose his own creative identity in the process.

“As more than one artist remarked to me, Bosch can devour you if you let him.”

Artists could select to work within the visual esthetic of Bosch; within the social, political and historical context of Bosch; or within the timeless moral, ethical and spiritual themes that prevail throughout his artworks.

One of the exhibition’s participants, Jaco van Schalkwyk, says he has always been fascinated by Bosch and his “fantastical creations”.

“It can be said that Bosch's work was well ahead of its time," he adds.

"His art was created over 500 years ago, yet it still appeals to the public and, more specifically, artists today. Like Bosch’s, my artworks also comprise social, religious and political topics, investigating and documenting people, places and the environment we live in.

“Bosch lived in a precarious period in history. The fifteenth century was a time of great discoveries, but also of great physical and metaphysical fear. In many ways, our own time echoes that of Bosch.”

According to Van Schalkwyk, the world is once again redefining its soul in the midst of a contemporary digital information explosion.

“Economic and political neoliberalism has replaced and altered irrevocably the face of national, regional and cultural identity. The manipulated abstractions of the contemporary ‘marketplace’ are influencing global events on a massive and all-encompassing scale.

“Many of Bosch's works, such as The temptation of St Anthony, can be interpreted as moralising and a warning of worldly temptations and deadly sins. I do not, however, intend to moralise, but rather investigate and question our modern-day society.” 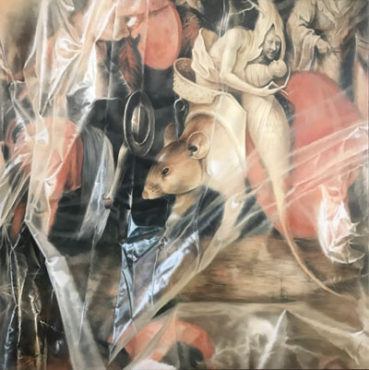 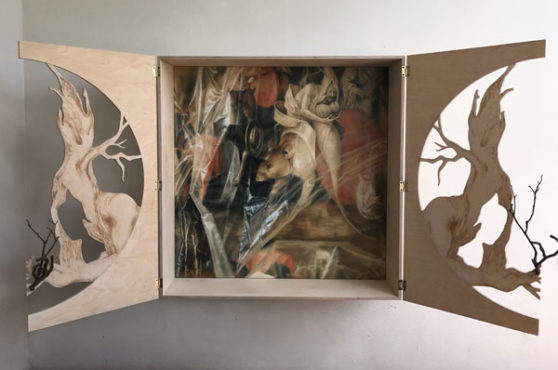 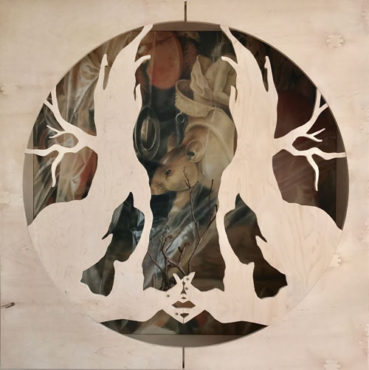 “All painting contributions were done by myself, whereas the construction and wood sculpting were done by Danelle.

“As a painter, I did not want to reinvent Bosch's techniques and subject matter, but rather pay homage to the old master. Therefore, I made reproductions and focused on reinterpreting recurring concepts in his works like The seven deadly sins. In this manner, I recreated fragments of some of his famous characters and fantasies.”

This artistic process helped Van Schalkwyk to play around with the concepts of greed and modern consumerist reproduction of popular imagery and, more specifically, famous paintings.

“I also made use of the trompe l'œil technique to portray these images behind an illusionary layer of crumpled plastic, so as to emphasise the ‘plastic’ and consumerist-driven society we live in. The painting illusion of plastic plays on the idea of commercial package material, but also has many other symbolic connotations related to the so-called deadly sins.

“Danelle's use of commercially produced plywood also plays with the idea of consumerism and package material. She also makes use of modern reproduction technology such as laser cutting and engraving, combining this with traditional bronze casting methods in the structure of the altarpiece.”

While not much is known about Bosch, and few of his works still remain, visual artist Cobus van Bosch says his paintings nonetheless suggest a highly original and even idiosyncratic interpretation of the impact of late medieval times on the human psyche.

“It seems not much has changed since then,” the Prince Albert-based painter continues.

“Although Bosch's work is packed with weird images, allegories and seemingly obscure meanings, I am impressed by the way in which his work (which is of relatively small scale) manages to evoke mood on a grand scale.” 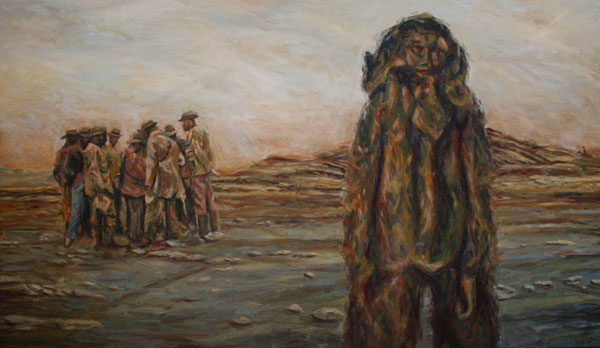 The title of Van Bosch’s piece for the exhibition, Ghillie monster, refers to the existence of snipers in warfare, and the fear and loathing they evoke.

“The ghillie suit, a camouflage cloak or overall, was first used by the English during the Anglo-Boer war of 1899–1902. It is now standard gear of snipers all over the world. The term ‘ghillie’ refers to Gille Dubh, a mythical Scottish male faerie clothed in grass and leaves. The camouflage suit was used by Scottish gamekeepers for centuries.”

While it is probably necessary to read the title and explanation of the work in order to gain access to what he had in mind when painting it, Van Bosch adds that he also believes that an artwork can provide different experiences to different people.

“Therefore, any interpretation would be fine. While the imagery is quite specific (one of the figures is the Boer general Lukas Meyer), I am more interested in the ability of an artwork to evoke mood, atmosphere and emotion than to communicate a ‘message’.

Since she is a painter who responds primarily in a visual way to the world, another exhibition artist, Diane McLean, explains that being asked to work with a concept doesn’t come naturally to her.

“I therefore had to first familiarise myself with the work of Bosch before deciding to tackle one of the many themes that are to be found in his work. The painting that springs to mind when talking about Hieronymus Bosch is The garden of earthly delights.

“But while it is a work teeming with symbolism and drama, I respond to his quieter, more monochromatic pieces, such as The wanderer. These, too, are filled with strong symbolism and indicators with much going on beneath the seemingly simple surface.” 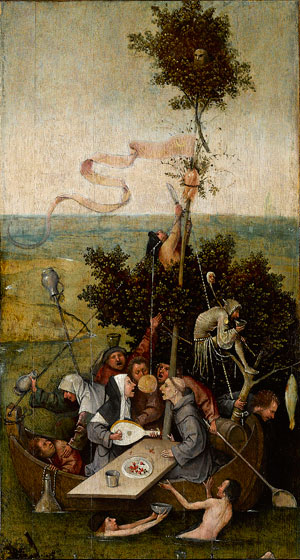 The ship of fools by Hieronymus Bosch

“I used the Union Buildings as a symbol of the ship filled with people floating rudderless toward a destiny beyond their control. The crowd in the middle ground is taken from press photos of protesters for the ‘Fees must fall’ and service delivery protests.

"The woman in red is a symbol of beauty and serenity in the midst of the madness, while the owl is a universal symbol of wisdom and a recurring image in Bosch's work.”

She believes that Bosch, as an artist from the Middle Ages, was preoccupied with human issues and religion.

“There are strong contrasts in his work: heaven and hell, sin and redemption, wisdom and folly. I tried to portray these conditions with reference to the social and political situation in South Africa.

“I also borrowed symbols often found in his work – such as the owl, a universal symbol of wisdom – but in Bosch’s work it has a slightly more contradictory meaning. It can alternatively be seen as a harbinger of doom.

“The closed book was used as a symbol of the futility of knowledge when dealing with human stupidity. The broken egg shell represents degeneration and collapse, and the funnel was used by Bosch to portray deceit and intemperance.

“Finally, Bosch favoured the use of the round format, which is something I felt fitted my composition for this piece.” 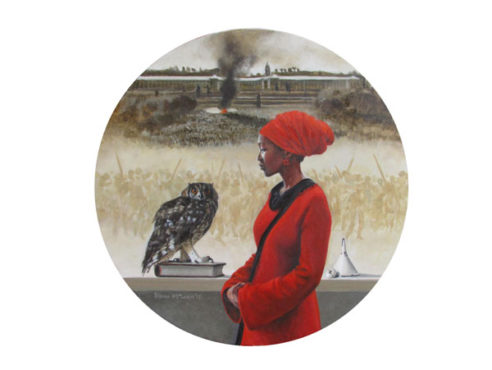 Knowledge and the ship of fools by Diane McLean