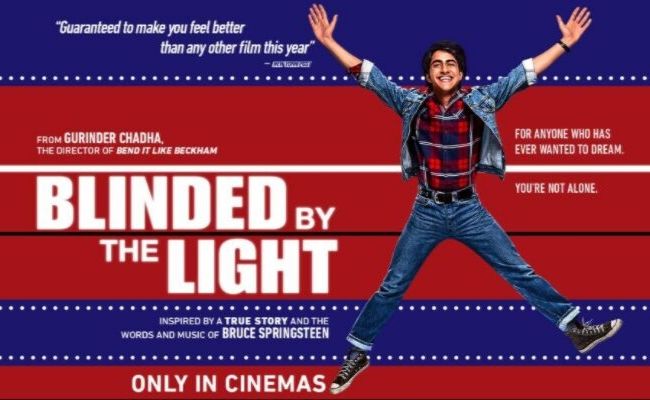 1987. When music fanatic Javed discovers the illustrious back catalogue of The Boss, his world is turned upside down; already a creative soul, he finds his passion for music and writing set alight by the songs of the working-class poet, whose lyrics feel all too familiar to the aspirational teenager. Yearning to escape his run-down hometown and the rules of his traditional Pakistani household, Javed finds himself caught in between two worlds and must discover if he, too, is “born to run” ...

It is a dazzling concept, using Bruce Springsteen’s working-class Americana lyrics and music as a backdrop to life in Britain in 1987 for a working-class Pakistani family. Bruce’s jaw-dropping body of work, one that he has spent a lifetime writing, rewriting, editing, recording, performing on tour and managing with an iron fist, carries enough gravitas to propel any movie forward. Javed’s story is also an interesting and relevant one to tell – life as an immigrant, as a person of colour and as a son needing to break free from an oppressive father. Unfortunately, a brilliant concept remains only a concept unless you give it gravitas by putting in the work. Blinded by the light feels like a passion project, an indie film that is faring far better than expected. More about that later.

There are moments of utter beauty and heartache that left this reviewer winded or in tears. En route to Javed’s sister’s wedding, his family is confronted by right-wing fanatics who block the road. The police only manage the protest, instead of stopping it and letting the family pass. Javed’s father is beaten up. All of this happens with a Margaret Thatcher “Uniting Britain” billboard in the background and Springsteen’s “Jungleland” as the soundtrack. “In the tunnels uptown, the Rat’s own dream guns him down/ As shots echo down them hallways in the night/ No one watches when the ambulance pulls away.”

In what can only be called a breathtaking sequence, director Gurinder Chadha (Bend it like Beckham) manages to capture perfectly the transformative power of music and the landslide of emotion it unleashes. Javed walks into a storm, his trusted Walkman clipped onto his belt. He is listening to Bruce for the first time. He is framed by the floating lyrics surrounding him, by a projection of imagery on the wall behind him and by the storm raging ahead. Of course, all this is set to Springsteen’s “Promised land”. “I’ve done my best to live the right way/ I get up every morning and go to work each day/ But your eyes go blind and your blood runs cold/ Sometimes I feel so weak I just want to explode/ Explode and tear this whole town apart/ Take a knife and cut this pain from my heart/ Find somebody itching for something to start.”

Chadha further explores themes of patriarchy, and does so without demonising Javed’s father (or his policy of keeping your head down and working hard). When he loses his factory job after 16 years and can no longer provide for his family, a very proud man is at a complete loss. Even though he is controlling and the only one in the family allowed an opinion, he still means well. One could argue he, too, is a victim of the system.

Alas, the film feels flat and too long. At least half an hour should have ended up on the cutting floor. It’s not that there are unnecessary scenes. The scenes themselves merely drag on for way too long. Close to the end, I had to stop myself from saying out loud, “Cut!”

The cinematography is rather average, and so is the grading and the styling. (It’s 2019. There are good wigs around.) Does it matter? Absolutely, yes. Far shallower films (I am looking at you, Crazy rich Asians) benefited from incredible production values – perfect styling, beautiful shots and perfectly balanced colour. Gurinder Chadha should have put in more effort. She has, after all, been making films since 1995.

Blinded by the light, even though infused with heart and soul and a lovely sincerity, would have benefited from a tighter edit and much higher production values. Bruce Springsteen, known for keeping an album back for three years because he was not happy with a small detail, would have kept this film back for much longer.