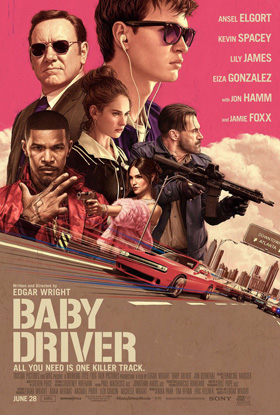 Yes, I know it is pitched as a movie about cars. It is called Baby driver, after all, and the car chases are stellar, mind you. Yet, at its core, it is a striking, choreographed and heartfelt ode to music, love, the [mostly] good guy and, yes, cars.

The film comes with a soundtrack sure to reach legend status. Not only are the song choices spot on (thanks for some Brubeck), but they are synchronised with Baby moving or tapping his fingers, curtains being opened or cars hooting. It is worth seeing just for the surprisingly whimsical opening car chase and subsequent stroll for coffee. I did not see that coming.

Neither did I anticipate the pumping heart of the film. The reason Baby starts drowning out sound with music (and his beloved iPod) is heart-wrenching. The car crash which kills his parents will make your heart stop. The relationship I enjoyed the most was not between Baby and his girl, but between Baby and his deaf foster father, Joe. Look out for the scene on the porch. It brought me to tears. Even though the film was slick beyond belief, it did not lose its depth.

That brings me to the chemistry between all the actors. The whole team is, for lack of another word, synchronised. Even though Baby and Debora’s relationship is newly formed, their chemistry makes it believable. Jamie Foxx stands out as the troublemaker. Kevin Spacey is Kevin freaking Spacey. I am not so sure Jon Hamm pulled off the psychopath.

But back to the cars. The car chases will make your heart race. Apart from the last 20 minutes, which I will discuss later, the chases are not over the top, not ridiculously CGIed, but just well shot, well choreographed and perfectly executed. (I think I racked up two speeding fines on the way home from the screening …)

So, the last 20 minutes is where the – ahem – wheels come off. What is it with big Hollywood films (I am looking at you, Wonder woman) that set up a lovely backstory, build the tension, tug at your heart strings and then mess it up by going overboard, by bombarding the audience with ludicrous chases, senseless violence and destruction of things? Just tone it down a bit, please.

My only other gripe with the film is that the ending is perhaps a bit too neat.

All in all, Baby driver is an unexpectedly beautiful dance between love, music and kick-ass car chases.