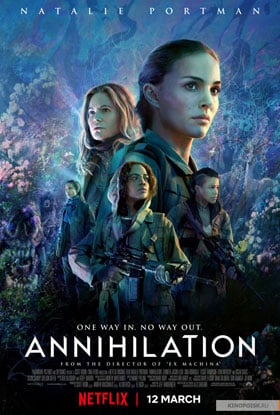 A female biologist mourns the disappearance of her soldier husband. He reappears after a year of being MIA. He is the only human to come back from the Shimmer and soon falls into a coma. To understand what is killing him, she enters the Shimmer, a growing world/virus/extraterrestrial being protected by a soap-bubble-like perimeter wall.

Apparently, American audiences did not respond positively to this film. According to the Guardian, it is too brainy for them. It was thus released on circuit in the States only, and a week later released on Netflix for the rest of the world to see. It is a double-edged sword. It certainly lit up a normal Monday night for me, as I was eagerly anticipating the film. But, I must wonder about the future of films such as this – intelligent films that both thrill you but also expand your mind. How sustainable is it to spend $50 million to make a film and then dump it on Netflix? Why do moviegoers prefer to be spoon fed, to watch the same regurgitated formulaic films over and over? Where are we heading if the exhilarating Annihilation demands too much effort to digest?

The film is scary, yet contemplative. The mutated world within the Shimmer is the stuff that dreams and nightmares are made of, gorgeous and creepy all at once. Annihilation will certainly leave (adventurous) moviegoers with much to talk about, and an ending to fight over for years.

Five female soldiers go into the Shimmer, each with her own baggage. The details both of their lives and of the mutated/fractured Shimmer are slowly revealed alongside each other. It is a smart move. Alex Garland, writer-director, does not overwhelm (or insult) his audience with conventional (read “boring”) exposition. He keeps you hungry for the next clue, a clue not spoon fed to you.

You expect the five women to be picked off one by one. We’ve seen it so many times. Garland certainly sets it up in this manner, but then surprises you. The film is delightfully indecipherable. You never know quite what to expect. Yes, some frightening mutated beasts do attack the women, but the real threat is the violence of the mind, the Shimmer mutating not only their world, but their DNA and their minds. Their baggage, their dark side, comes into play.

The characters are intelligent and react to this strange new world in an intelligent manner. Natalie Portman’s Lena is a strong, silent and compelling character to watch. She makes the audience invest in the mission and in the unsentimental flashbacks of her marriage to Kane. This frees up the director to go all out with the storytelling, because Portman gives the audience something to hold on to, something they care for.

Jennifer Jason Leigh is superbly chilly and hard to read. She gives a restrained performance that bristles with so much more. Gina Rodriguez completely shakes off the sweet and likeable Jane from Jane the virgin. Her paramedic addict has a certain swagger cloaking a relatable vulnerability. Tessa Thompson is surprisingly quiet and affecting and gentle. (Keep an eye out for her “ending”.) Tuva Novotny leaves a lasting impression, even though she is the first to be “picked off”.

There are many themes running through this film, the most obvious being self-destruction. When Lena returns, the hazmat suits ask her why she is the only one to return. Her answer is that she had something to come back for. You accept she is referring to Kane. The other women all assumed it was a suicide mission, but went ahead anyway. They were subconsciously self-destructing, running away from pain or from addiction or from their dark side. The highlight of the film is an almost ballet-like sequence between Lena and her “other” in the light tower. Jaw-dropping stuff.

Within a week of its release, the film has spawned many interpretations. I am not going to add to it any more than I have. The best sci-fi leaves it up to the viewer to decipher the meaning in his own time, on his own terms.