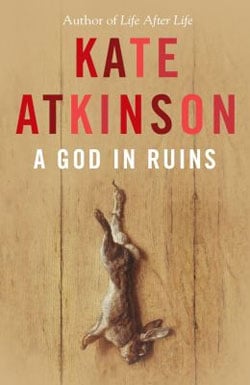 Despite her substantial literary success, I did not know Kate Atkinson’s work before A God in Ruins was recommended to me by a friend whose taste I value. It won the Costa Novel Award in the beginning of this month, as did Atkinson’s previous novel, Life After Life (2014). The two are related, but can be read independently. I hope to turn to the sibling soon, as A God in Ruins is one of the most exquisite novels I have ever read, and the idea of Atkinson’s backlist reassures me greatly.

A God in Ruins is many things. It is the story of a British family set against the historical background of the past century. It is a novel about war and its aftershocks. It is a fine inquiry into human nature. But above all, it is a declaration of love for literature, its power and its manifold mysteries. And it is highly ambitious. What astounds about A God in Ruins is that it never falls short of these formidable ambitions. Such novels are rare. They take root in your mind and blossom in your soul. Even ferocious readers encounter a novel like this only once in a while.

The way it captures fiction’s ability to heal, to open up spaces in us we never even knew existed is striking. It is poetic in style as well as in its wisdom. For me, A God in Ruins was a magical key. It opened two doors in my life, two doors connecting the past to my fragile present: one appeared while I was still reading, the other after I’d finished the novel. I stepped through the first, an imaginary one, during one of those serene nights when you are at peace with the world and yourself. It was around midnight. I was lost in the arms of a comfy easy chair; a soft caramel light illuminated the room. When I looked up from the book, I saw something so beautiful that I wanted to hold on to it forever. But I was scared to disturb the scene by searching for my camera, so I turned to the last blank page of A God in Ruins and drew a sketch of what was in front of me: a moment of flickering hope. It is also engraved in my heart.

The second door was real. It is the door to my late husband’s library. There are innumerable books in our house. We have roamed among them with the great pleasure that exploring books can bring only to two readers in love. When I finished A God in Ruins, I was crushed by the inability to share it with André. It was published a few weeks after his death. But I knew, had he been alive, I would have passed the novel to him the second I had finished with it that early Sunday morning, and I would have asked him to read it immediately so that we could discuss it in detail. Instead, I was all alone in an empty bed and all I could do was weep. What I have discovered about grief and loneliness is that it is not the lows which are unbearable, but the emptiness of the highs, when all you want to do is experience them with the person you love and there is no one there to hold you.

But then, still lying in bed, tears seeping into my pillow, I had a thought: If A God in Ruins is Kate Atkinson’s tenth book and she is as brilliant a writer as her latest testifies, then perhaps André knew her work …? The possibility jolted me into action. I ran into André’s study and began the search in the section with English language fiction under “A”. And there was Atkinson’s debut novel, Behind the Scenes at the Museum (1995), for which she won the Whitbread (now Costa) Book of the Year prize. In the margins, André’s notes and appreciative squiggles. Among many others, he loved this sentence on page 12: “Even our ghosts are asleep, curled up in the corners and stretched out along the curtain rails.”

I met a woman recently who reminded me of Nadine Gordimer. Also in her eighties, the new acquaintance not only radiated beauty but spoke lovingly about books. “Your library is your soul,” she said, and lamented the dismantling of hers when she moved from Johannesburg to Cape Town. I remembered the phrase again when thinking of the impact the discovery of Atkinson’s Behind the Scenes at the Museum in André’s study had on me. With trembling fingertips I traced his comments in the novel and then, hugging it to my chest, I looked up and saw the four high walls of the room around me – all covered in bookshelves, thousands and thousands of books, in every one a potential for sharing across time, beyond death. Because I realised in that moment that even if I could not press A God in Ruins into André’s hands, he was pressing another Atkinson title into mine, saying, “I’m still here, my soul is in this library, these books will take care of you.”

And as I write these words through the ebb and flow of tears and smiles, I remember a friend teasing me the other day. “You are still here?” she said, referring to the present political and economic climate in the country. “Of course,” I replied. “I’m a custodian of a very important library.” What I did not say is that Cape Town is my home, that this is where I now belong, and I’m not going to run away from hardship. The endurance of a loss is the acceptance of the value of something which no longer exists. I understand that I was able to recognise the beauty which was hidden behind my first metaphorical door for what it was – a gift one should never say no to – because of the kind of relationship André and I had.

In December I gathered enough emotional resources for the first time since André’s death to clean his study. I put his research papers for Gold Dust (the novel he was working on at the time of his passing) in order, gathered his documents into a folder, reshelved some books, and surrounded his writing space with others which would have brought warm memories to him. I dusted, vacuumed, polished, and … found priceless treasures. The most precious, a diary. Probably the last one. It was among the research material for his novel. I assumed he was looking up something. I opened it at a random page: 5 July 2005; next to the date was my name, and then a quote of something I’d said that day. I knew before that it had made an impression on André back then because he’d used it in one of his novels. But I found out only now that he’d made a note of it in his diary. Like Atkinson’s Behind the Scenes at the Museum it was a revelation. I did not look beyond the entry of 5 July 2005, but the idea of an entire world of André’s thought and insight and feeling and memory waiting there to be explored gives me infinite comfort.

On the last page of Behind the Scenes at the Museum, André had marked this sentence: “In the end, it is my belief, words are the only things that can construct a world that makes sense.”

Death of a loved one shatters your world. I will never forget the day I was walking home from school in Jelenia Góra, Poland, where I was born, and was suddenly struck by the realisation that one day my parents would die. I must have been around eight years old. I came to a complete standstill in the middle of the street, paralysed by the thought, imagining the unimaginable – sheer anguish. I don’t know how long I stood there rooted to the spot, or how I got home. I know that it took me years before I was able to speak about what had been my first serious encounter with death. Like most of us, I have been trying to make sense of it ever since. Thankfully, my parents are still alive, but André is gone, and the world around me is in pieces.

It is difficult to write about A God in Ruins without spoiling the enormousness of the disclosure at the end of the book. It is one of the most profound novels I have read about death, but its most remarkable aspect is that it contains the lives of multitudes. It shows how we survive beyond physical annihilation: in the blood and flesh of our relatives, in the memories of all who knew us, in acts of kindness, in our achievements, and in the spaces artists have created for us. Ultimately, it shows how literature defies death: “When all else has gone, art remains.”

A God in Ruins spans nearly the entire 20th century. The deftness with which Atkinson slides between different time frames and character perspectives is pure elegance. Something that might have been confusing and laborious for the reader is an amazing experience as we follow the lives of Teddy Todd and his family. The opening scene introduces us to Teddy in 1944 as he is watching a farmer’s daughter across the farmlands surrounding the airfield from which he departs on all his flight missions as a war pilot. From there, the novel takes us back to his childhood and his parents: “What had gone into the making of Teddy? Not slugs and snails, it was true, but generation upon generation of Bedfords and Todds, all coming to one singular point in a cold bed in the chill of an autumn night when his father had caught hold of the golden rope of his mother’s hair and hadn’t let go until he had hauled them both to the far shore (they had many euphemisms for the act).” And from the moment of Teddy’s conception we are hurled forward into a distant, uncertain post-war future when Viola, Teddy’s daughter, is coming to terms with the shock of motherhood. In between we witness Teddy’s own struggles with finding a way to live beyond the devastating reality of war. By the end of it, we are told, “there was nothing about men and women that surprised him. Nothing about anything really. The whole edifice of civilization turned out to be constructed from an unstable mix of quicksand and imagination” (my emphasis).

Atkinson’s portrayal of family dynamics is so real and poignant that one cannot help feeling for them all, no matter how unlikable some of the characters might seem: “The family that put the ‘fun’ in dysfunctional”. She investigates what lurks beneath the everyday with subtle ease. Towards the end of the book the reader is so invested in the fate of these people that the awaiting twist is staggering.

“As you got older and time went on, you realized that the distinction between truth and fiction didn’t really matter because eventually everything disappeared into the soupy, amnesiac mess of history. Personal or political, it made no difference.” What remains is the triumph of the imagination, over and over again, as our souls continue to seek refuge in the elusive places of safety which can be found only between the covers of books.