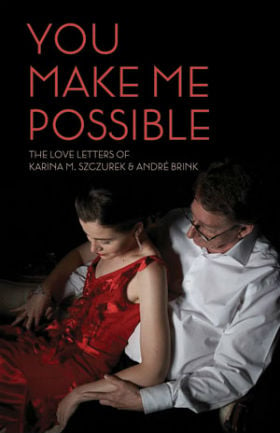 The early email correspondence between Polish-born Karina Szczurek and the prolific and internationally acclaimed Afrikaans writer André Brink is a romantic WikiLeak of sorts that gives readers detailed and minimally censored insight into their courtship. That the growing passion between them worked out as perfectly as both imagined, coming from different hemispheres, must be the ultimate romantic plot, and, therefore, fans of Brink will be engrossed in this book tracking their budding love affair, titled You make me possible. The title refers to a remark by Szczurek, which Brink noted and put into the mouth of a character in a later book.

It is the second intimate account of a relationship in the womanising writer’s love life, the former titled Flame in the snow, first published in 2015 in Afrikaans as Vlam in die sneeu. This book consists of the love letters of half a century ago, between Brink and iconic poet Ingrid Jonker, who, shortly after the end of their affair, drowned herself in the sea. Szczurek, a professional editor, was involved in the compilation of the letters from this youthful, tumultuous relationship.

The play on words between the two literature lovers and academics are more cerebral than in the case of Brink’s earlier correspondence, as Jonker had no tertiary education. In the case of the Brink-Szczurek correspondence, the prospect of physical love is heightened by longings and imaginings.

Szczurek is an academic who earned her PhD with a thesis on Nadine Gordimer’s post-apartheid writing. She contributed to numerous publications, and blossomed into an author in her own right with the encouragement of Brink. In a note at the back of You make me possible, she says that the warm reception of her first full-length memoir, The fifth Mrs Brink, about her romance with and ten-year marriage to Brink, prompted her to consider the collection of emails for publication. With the royalties, she intends to establish a literary prize in honour of her late husband.

Biography lovers may despair that the internet is making it improbable that biographers will still discover old, forgotten letters in dusty attics, revealing juicy secrets about celebrities. It still remains a problem when writers discard electronic records of their correspondence, but this book proves that emails can be every bit as romantic as old-fashioned letters, and all the more immediate.

Written between December 2004 and March 2005, the 250 000-word Brink-Szczurek correspondence shows a growing intimacy, from tentative to fever pitch, when Brink writes to “Winged Angel-live” and “Karina-my-lief-my-lief”, and Szczurek to “Darling Adé” (sic). Both disclose their sleep patterns, health issues, personally noteworthy books and films, as well as previous love affairs, marriages and relations with close friends and relatives, like parents and Brink’s children. Both profess that only total honesty makes a life together possible, and Brink also admits that infidelity degrades a person.

Were it only half a century ago, the few months between their first and second encounters might only have allowed, timewise, an exchange of a few letters. But, with the speed with which words travel in cyberspace, Szczurek’s divorce was initiated and finalised quickly, and she and Brink were ready to start a new life together within a few months.

Brink was 69 and Szczurek 27 when they first met in Vienna, where she collected him and accompanied him on a short train trip to Salzburg, on their way to a conference she had helped to organise. In You make me possible, the reader gets drawn into their life-changing journey.

Throughout the correspondence, the literal journey of their first meeting is used as an analogy for their relationship. Karina writes that she would have liked to have undertaken any journey with him, even by donkey cart. She quotes from her reading: “I think of love as a train, on an endless journey where people get on and off at every stop. But when you are on the inside of love, there is no time. It may be an illusion, but at least it is an illusion of infinity. The train is there. It goes on ...” He responds: “So: let us continue our journey (precisely because we know that both have the complete freedom to step out at the next station if it must be so) and be grateful that there is still magic in the world.”

Karina Szczurek admits to omitting references to well-known personalities which would have intruded on their privacy. This is understandable, although “celebrity gazers” would, of course, have preferred it unedited. A few interesting details remain, however, like the bumps in the road of the friendship between Brink and Breyten Breytenbach, which Brink refers to.

When some topics discussed on the phone leave gaps to infer, it begs the question: Is every detail really worth knowing? In this regard, some stricter editing would have had a positive effect.