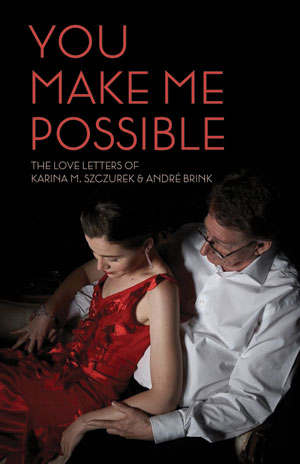 Karina Szczurek's You make me possible is a compilation of correspondence between Karina and André Brink. Naomi Meyer and Liné Enslin put their heads together and asked Karina a few questions about the book.

I think of it as a courtship in words. When we met in Austria in December 2004, there was an immediate attraction between us, but we did not acknowledge it in any way until we began writing these letters to each other after that first encounter. It was only in writing that we had the courage to admit that we were falling in love.

From the moment we met at the airport in Vienna where I was picking up André to accompany him on the train journey to Salzburg for a symposium I was helping organise, through the weeks and months of falling in love which followed, until my final decision to move to South Africa to be with André in October the next year, we wrote more than 250 000 words to each other. For this book, I decided to concentrate on the letters leading up to our meeting in Paris on 14 March 2005, and selected the ones which tell the story of our first encounter, the subsequent acknowledgement of our mutual attraction, our falling in love and our decision to be together. There was the practical consideration of having too much material for one book. Many of the letters we exchanged were purely about practical arrangements, concerning phone calls or travel plans, etcetera. I left most of these out. And I kept some excerpts from the correspondence private for reasons explained below.

I would not call it “censoring”, but I did omit some passages while selecting the content for this book. In editing, I left out passages which allude to people and incidents which I felt were not mine to disclose. We shared many stories in our letters, as lovers do, but I did not feel that they were mine to share with others. André and I both used initials to refer to a few people in our lives; however, in some cases, I introduced initials, deleted names or changed them altogether to protect the identities of friends, family members or lovers. While sharing our story, I wanted to be as sensitive as feasible to the stories of others and tried to include only those that were integral to the understanding of our budding love affair. At the core of every relationship, there are treasures which belong only to the partners; those were the aspects of the correspondence which I wanted to keep only between André and me. As to other changes of the original letters incorporated in You make me possible, we edited for consistency and corrected typos and grammatical mistakes, but made sure not to rewrite any passages, apart from a few rare cases where it was unavoidable for the sake of comprehension and continuation.

The title I chose for this collection derives from something I said to André when I visited him in Cape Town for the second time. Unbeknownst to me, he noted the words in his diary on 5 July 2005: “I love you because you make me possible.” He used the sentence for one of his characters in The blue door (2006). I commented on the statement when reading the manuscript, and André reminded me that I had said those very words to him once and said he had found them memorable. It was only after his death that I discovered the note he had made in his diary. The quote felt like the most appropriate title for a compilation of our letters which contains our hopes and the recognition, against all odds, of a possible future for us as a couple. The fact that we made all those dreams and wishes come true, not only on paper but also in reality, was a miracle I will continue celebrating for the rest of my life.

I think that any relationship can profit from a correspondence. It is a fascinating way of exchanging ideas. They can be more considered and articulated in ways which are often impossible during everyday encounters and conversations. Sometimes, you can say something in a letter that is impossible to voice otherwise. I only pick up the phone when I have no other choice. I have never been a phone person. The only people I feel entirely comfortable speaking on the phone with are my mom and my brother Krystian. However, André and I were very grateful for the opportunity phone conversations offered us in the beginning of our relationship. They made the words we exchanged in letters real, more tangible. And I loved listening to André’s voice on the phone. It was very special. He liked phoning people and had a few friends with whom he was on the phone daily.

I think, for André, there was no difference. He was absolutely in charge of the languages he wrote in. For me, English was and remains a challenge, but one I constantly delight in. I have been in love with the English language for nearly thirty years now. Being able to express myself in it is a joy and a daily discovery. Writing English to André pushed my linguistic boundaries in ways that only love can, as I wanted to touch him with words as much as I wanted to be able to touch his hand.

In hindsight, I think it was some kind of intuition. We both knew that something magical had happened when we met in Austria. The letters were the only way to attempt to express those feelings and ideas. There was an element of madness involved in the process, and it took loads and loads of courage. I am amazed how brave we were, how we knew that this was the right thing to do, against all odds. And, as the meeting in Paris confirmed, it wasn’t just words. It was all real, after all. André and I defied all those odds and turned all those dreams expressed in the letters into reality. The decade we spent together was everything we had hoped for and more. We often think that something is beyond our reach no matter how much we long for it. And, sometimes, when we are lucky – and courageous enough – the impossible becomes possible. That’s the miracle of love.

I have written a memoir about our relationship and André’s death. Before publication, I was terrified how readers would respond. But the reception was extremely positive, kind. It is this kindness that made me decide to publish the letters. You cannot control how people will interpret a text – any text. But I hope that people will read the letters with open hearts and kindness.