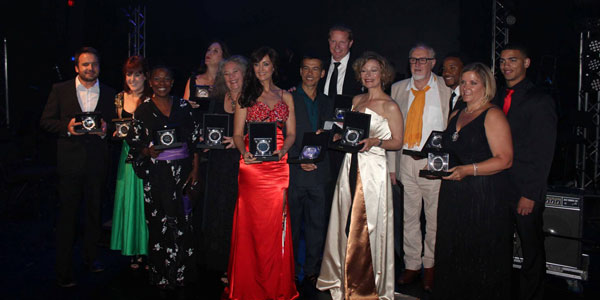 The highly anticipated 49th annual Fleur du Cap Theatre Awards, supported by the Distell Foundation, was held at the Baxter Theatre last night, Sunday 16 March 2014. The event, as always, was a glamourous, sparkling affair, attended by the Who’s Who of the South African theatre scene. The onstage entertainment, following a street vibe theme, was directed by Lara Bye and featured iconic performers Dorothy Masuka accompanied by guitarist Bheki Khoza, the Cape Philharmonic Youth Orchestra, the Ubuntu B-Boys, and an ensemble of dancers in a vibrant pantsula number choreographed by the former Artistic Director of Jazzart, Jackie Manyaapelo. The MC’s for the night, the hilarious comedian Alan Committie and talk show host Africa Melane, were a slick combination, presenting the onstage ceremony with flair, charm and wit.

The Fleur du Cap Theatre Awards, first established in 1965 at the Three Leaf Awards, is widely recognised as one of South Africa's premier events and is high on the Mother City’s cultural calendar every year. Each Fleur du Cap Theatre Award is valued at R15,000, and is given along with a beautiful silver medallion to outstanding individuals for theatre excellence, specifically focusing on professional theatre productions staged in the Cape Town Metropole and surrounds. For a production to qualify, a run of a minimum of eight performances over a period of three weeks at the same venue is required.

Awards are presented in twenty different categories and this year the panel of judges made their decisions after having viewed almost 84 productions, hosted in several venues in and around Cape Town. The full list of winners is as follows:

1. BEST PERFORMANCE BY A LEAD ACTOR IN A PLAY

Brendon Daniels for Rooiland as Adidas

2. BEST PERFORMANCE BY A LEAD ACTRESS IN A PLAY

3. BEST PERFORMANCE BY A SUPPORTING ACTOR IN A PLAY

Charlton George for Rooiland as Pastoor

4. BEST PERFORMANCE BY A SUPPORTING ACTRESS IN A PLAY

Patricia Boyer for The Miser as Frosine and Master Jacques

5. BEST PERFORMANCE BY A LEAD ACTOR IN A MUSICAL OR MUSIC THEATRE SHOW

6. BEST PERFORMANCE BY A LEAD ACTRESS IN A MUSICAL OR MUSIC THEATRE SHOW

7. BEST PERFORMANCE BY A SUPPORTING ACTOR IN A MUSICAL OR MUSIC THEATRE SHOW

Andrew Laubscher for The Rocky Horror Show as Riff Raff

8. BEST PERFORMANCE BY A SUPPORTING ACTRESS IN A MUSICAL OR MUSIC THEATRE SHOW

9. BEST PERFORMANCE IN A REVUE, CABARET OR ONE-PERSON SHOW

10. AWARD FOR MOST PROMISING STUDENT

Craig Leo for Voices Made Night

Sarah Roberts for The Miser

AWARD FOR INNOVATION IN THEATRE

The Fleur du Cap Theatre Awards is an initiative of the Distell Foundation that forms part of Distell’s Corporate Social Investment Programme, which is dedicated to support the development of the creative arts industry in South Africa.

The 50th Fleur du Cap Theatre Awards will be held in grand style at the Artscape Opera House in 2015.