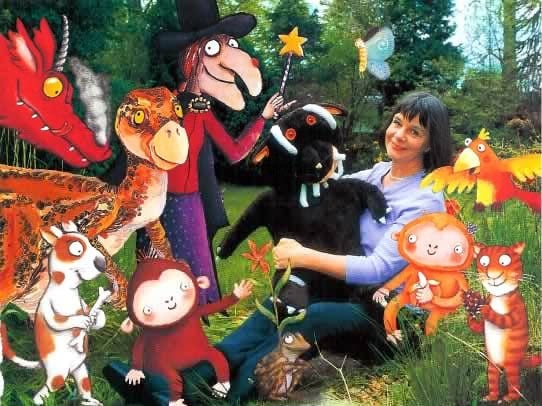 Julia Donaldson is widely read in South Africa, because some of her books have also been translated into Afrikaans, as you’ve just mentioned – The Gruffalo is well-known as Die Goorgomgaai (translated by Philip de Vos). Anything young South African fans should know about regarding, say, meeting Julia Donaldson soon?

We are very excited that we have also recently translated What The Ladybird Heard into Afrikaans, and are busy with the translations for the Zulu edition of The Gruffalo. Fans of all ages are welcome to attend the once-in-a-lifetime opportunity of the Julia Donaldson theatre shows, as well as the public book-signing event in both Cape Town and Johannesburg. 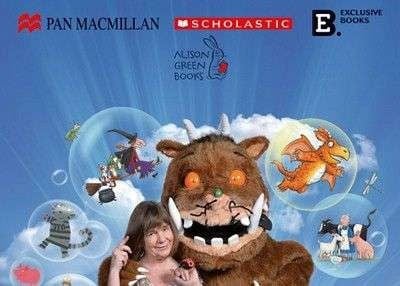 Please give us some details regarding Julia Donaldson’s visit to South Africa? Times, dates, places?

Pan Macmillan and Scholastic, in association with Exclusive Books, are thrilled to announce that Julia Donaldson will be doing theatre shows in both Cape Town and Johannesburg, where she will be singing some of her popular songs and re-enacting some of her books. She will be joined by a cast, as well as her husband, Malcolm Donaldson, who plays the guitar. The shows are approximately one hour long, with book-signing afterwards. Books will be on sale at the theatres.

Tickets for the shows can be purchased on Computicket. Tickets are R75 per person (R65 for group bookings of 50 people or more).

Friends from Scotland recently gave us a Gaelic version of Room on a broom. Why Scottish? And in how many other languages have her books been translated?

The Gruffalo, Julia’s most recognised title globally, has been translated into 43 languages (excluding the Zulu version currently in translation). Publishers understand that translations of children’s books are very important, for children to identify the words that they hear daily, see the words written down in books in their own language. Children being able to read such famous and well-loved books as The Gruffalo in Gaelic is invaluable to the preservation of the Gaelic language.

Are there any new publications South African readers can look forward to? 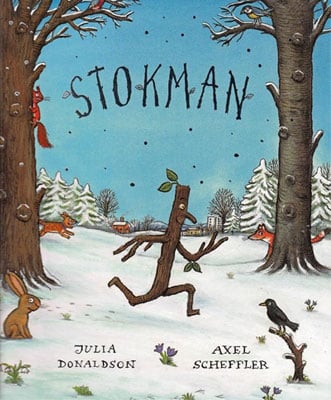 Yes, as discussed, the Afrikaans edition of What the Ladybird Heard (Die Skilpadbesie  se Plan) will be on shelves from February 2016.

The Gruffalo is currently being translated into Zulu, to be released in late 2016.

A new boardbook from Julia Donaldson, called It’s a Little Baby and illustrated by Rebecca Cobb, will be released in March 2016.

Our Afrikaans titles are published by Protea Boekhuis.

The following two books will also be published in Afrikaans by Protea later this year: Zog and the Flying Doctors and Scarecrow’s Wedding.