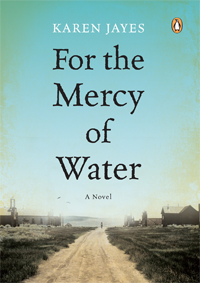 Karen Jayes talks to Naomi Meyer about her book For the mercy of water.

You won the Sunday Times Fiction Prize in 2013 for your novel For the mercy of water. Please can you tell me about this book: its premise, the story, the characters, your inspiration?

The book came out of my observations as an editor of a newspaper in London covering the Middle East. Every morning, I would see stories coming across my desk of water conflicts in far-flung regions of the world, like Yemen and Afghanistan. None of these stories ever made it to the headlines, no doubt because they had little geopolitical significance in comparison with the energy resources such as oil and gas, which are behind our current global conflicts.

When I returned to South Africa, I also began to notice small stories about water conflicts in rural areas, stories of poor people desperate for water who were breaking pumps so that they could get access to water, while water company guards cracked down on them, sometimes violently. I read of young girls braving dark nights to walk miles for water.

I saw how crucial water was becoming, and it was around the time that I began the novel (2009) that numerous water conferences were being held at global level, involving the UN, governments and private water companies who were making a grab for the resource they called “blue gold”.

So, I imagined a story of a country at war over water. I deliberately chose not to name the region or the characters, to enable a reader anywhere in the world to relate to it as his own, and also to move past the parameters of race and culture that can sometimes divide us. I believe the struggle for water access in the face of profit-hungry corporates is not a local struggle. It’s a global one, and we must unite with others who are battling the same.

The idea was to produce a story of beauty and validity which showed the journey of a female hero as she “followed the water” to find the truth about herself and the world she lived in. But, the story had many levels, just as the struggle for access to water, especially by women, has many levels. There is the sociopolitical element, where resource scarcity brings about great human trauma, and there is the feminist element, where the rape of the environment by corporates is akin to the defilement of a women’s body, and the earth’s regeneration akin to a feminine renaissance. And there is the spiritual element, where, for this particular female hero, the water led her to a better understanding of her Creator and what was required of her on this earth.

In short, the plot follows a young woman, a writer, who sees a story on a small independent website (they are living, as we are, in an era where mainstream news is corporatised and cannot be trusted, since the corporations are bound to one another and, therefore, support one another’s narratives of power). The story features the voice of an old woman who has been found after a sudden rain in a town long since thought deserted due to a drought. She is speaking in poetic language, in metaphor, and relaying a great trauma where water company guards passed through the town and abused some young girls under her care. The writer hitches a ride to the town and, on the way, experiences her own trauma, which ties her inexplicably to the old woman and the girls. When she arrives at the town, she finds an almost theatrical scene, where a doctor, two aid workers and a journalist are camped out, listening to the old woman’s almost prophetic ramblings, which warn about the preciousness of the water and how it is being stolen from the people and sold back to them at prices they cannot afford. She speaks about how this is “a war over the life left in all of us”. The writer joins the camp and is captivated by the old woman’s story. When the water company arrives at the behest of the government to manage the situation through their PR gurus, the old woman is taken away, but before she leaves, she charges the writer to find the only girl left surviving, Eve. The rest of the novel is the story of the writer’s search for Eve.

All in all, I wanted to interrogate seriously the morality of corporates as we see them becoming more ruthless and uncontrolled, while our environment and resources become more strained. Ultimately, I wrote it as a condemnation of the prevailing social, political and financial system, which has corrupted to the point that the earth’s water is now being siphoned by private companies and then sold back to the poor at a huge profit. I see the struggle for water access as the heart of a struggle for a new social and political system.

Please will you elaborate on the title of the book?

Water is a mercy from our Creator. All the Abrahamic religions and other religions of the world hold water as key to practising their faith. It features in rituals and celebrations. Because it is essential for all of us to live, and since our resources are finite, it is essential that we use it sparingly, but also that governments come to the table with an intent to ensure that we all have equal access, so that this mercy flows from the Source of water, to the bodies of the children and animals in our care.

What are your thoughts about the water situation and the drought in the Western Cape and in other parts of the country?

Although the rains have been less and the country is water-stressed, I do not believe in Day Zero at all. I believe that this threat of an apocalyptic scenario is being used like a stick over our heads to strong-arm the populace into accepting widespread privatisation of our water, and disastrous “solutions” like desalination (which is costly and energy-intensive, uses more water to run than it produces, and pumps tons of brine back into the oceans to destroy fish and other life). In the meantime, there are many politicians willing to parachute in, in true saviour mode, at the last minute.

This strong-arming has been carefully thought up and managed by PR people, who knew very well that the privatisation thing would be a hard sell to South Africans.

Threatening South Africans with dry taps is akin to threatening those of us who cannot fork out R8 for a 250 ml plastic bottle of filtered tap water, with death in the one hand, while in the other offering us the “solutions” that, just by the way, will net huge profits for the city and private water companies, while pushing up our bills. Some of these water companies hail from countries such as England, France, the United States and Israel, countries with which some South African companies have deep links.

This is nothing more than colonisation. We are being colonised by the corporates, and water is the mode of this deathly exchange. I can’t understand why journalists have not been more aggressive in their reporting of this issue. After all, we have a rich history of colonisation, and the patterns are being repeated by the usual suspects. The company, the PR people, the government, the army … Just read my book (LOL); it’s all in there. But, what I am saying in the end is that it really doesn’t have to be this way. There is always a better way; it’s just that the beneficiaries of the money-spinners don’t want you to see it.

What do you think can be done now? Any practical ideas when the taps run dry?

I don’t believe the taps will run dry, but if they do, it must mobilise us. I do believe we should organise ourselves and resist attempts to privatise our water and build desalination plants at costs that will see us paying exorbitant amounts for our water and destroying the environment, even when the rains, God willing, do return.

Currently, we should all calm down and resist the threats of the PR people and their government paymasters. Then, we should identify clearly the mistakes that have been made, which include great wastage, lack of foresight and inequitable distribution. After that, we need to explore seriously the wonderful innovative options for water recovery, capture and distribution being offered by ethical individuals and groups all over the country, to whom those in power are not listening because their motivation is not primarily lining pockets.

We should amplify these voices. The media has a key role to play here, to turn the lens onto solutions, not politicking and profit-making. We need to put their plans into action. We must make our stand for water access be a stand for a more ethical and equitable society as well. I believe we are given these challenges, not to scare us, but to cause us as humans to open hitherto unopened doors, and to try to be better.

In the end, like in the book, it boils down to helping one another. There is great blessing in giving a glass of water to a poor and thirsty person. It is a form of healing. That metaphor needs to be expanded and extended on a grand scale, and that’s the truth.