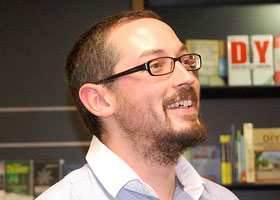 In March 2012 NB Publishers announced the appointment of James Woodhouse as Publisher of Kwela Books, effective from 1 April, 2012.

James has worked in the publishing industry in a variety of editorial roles over the past nine years. He began his career as a fiction editor at Kwela in 2003, subsequently worked as freelance editor, and most recently as a commissioning editor for Penguin South Africa. He is also known to the book trade through his involvement with the Franschhoek Literary Festival.

Naomi Meyer asked him about his background, book sales and the way in which social media have changed the publishing landscape.

Hi James, and thanks for finding the time to have a chat. Congratulations on your appointment as Publisher at Kwela Books. Please tell our readers about your background.

Hi Naomi, thank you for the opportunity. I am originally from the UK, but I have worked in the publishing industry here in South Africa for ten years now. Most of that time I have been connected with Kwela – in one way or another – so it is a great privilege to return to the company.

You are known for your previous involvement with Penguin South Africa and the Franschhoek Literary Festival, both mainly English literary institutions. How much do you need to know about indigenous languages – like Xhosa or like Afrikaans – and publications in these languages in your new capacity as head of publications at Kwela?

The landscape of South African publishing is in flux at the moment and all of us – those who work in the industry – are having to re-examine our assumptions about how we sustain our lists. Hopefully this period of transition will allow all of us to once again re-engage with the reality that almost all trade publishing in this country is done in two languages – and perhaps come up with some innovative ideas around how to change this for the better. However, much as I would love to say that I can see new vistas opening up, the fact remains that trade sales in anything but English and Afrikaans remain very small. Can we change this? I believe so. But it is not going to happen without a larger architecture in place. If we take Europe as an example, many governments play an active role in making sure that books – in general – are translated into “home” languages. This is particularly important in a country like the Netherlands, for instance, where English is taught at school and most of the book-buying public can read in both languages. Without sustained focus and financial support from the government the Dutch market would be overrun with English titles – maybe not immediately, but in the longer term. It is important to the Dutch government that people read in Dutch and people make a very good living as translators – as they do in Germany, Italy and France. The government, alone, is not responsible for creating a market for books in all languages in South Africa, but government and publishers – working together – could change the whole industry for the better in the long term.

As to how much you need to know, this is a difficult question to answer. As a publisher you are reliant on the people around you for their judgement – no matter which language a manuscript is written in. I am lucky to work with people I trust, who have their own ideas and views on how to move forward, and I am hopeful that together we can continue to produce award-winning work. I would certainly not want to see Kwela stop publishing in Afrikaans – that would be to deny its heritage (we have been blessed with some wonderful works in Afrikaans, by some wonderful authors, over the years). In fact, if anything, I would like to see the list diversified as much as possible.

What sells better in this country: Afrikaans or English fiction?

This is an interesting question. In general terms, more English fiction is bought in South Africa than Afrikaans fiction. However, if you look at books that originate in South Africa – the true local market, if you will – then Afrikaans is by far the dominant partner. Look at any list you like and you will see that Ena Murray – not John van der Ruit – is South Africa’s true superstar.

Do people read more nowadays than they used to, or not – especially people who didn’t have access to books, really, in the past? Do you envision any initiatives to stimulate reading in this segment of the market?

People, in general, do read more than they ever did – global urbanisation patterns create spaces in which people have no choice, if they want to attain higher living standards, but to read more. However, if you are asking if they are reading more books, the question becomes a little more tricky. Certainly, there are far more books being published now than ever before. The number of titles published in the UK this year, for instance, is something like ten times what it was fifteen years ago. Obviously, we see only the tip of this iceberg here in South Africa, because our access to these titles is somewhat restricted, but the reality is that there is greater choice in South African bookshops today than there have ever been.

In terms of the South African reader, it is very difficult to say. The market seems fairly static, but that is a good sign if you think that ten years ago everyone in the industry was talking about aging readers and the death of local publishing. This didn’t happen. Are we accessing a new market now, that we weren’t accessing ten years ago? I think so. Are we doing enough to access new markets – probably not. But, once again, this question goes back to a larger architecture and what we (the stakeholders), collectively, are doing. Right now, the truth is that unless you live in an urban centre your access to books is restricted. E-books will change this, but what this actually means for the market is unclear. Hopefully, we will finally be able to access a greater number of readers with greater ease.

How are you thinking of positioning the “brand” Kwela, as opposed to, say, Tafelberg or Human & Rousseau?

Kwela has always stood for new, innovative South African fiction and challenging non-fiction. However, we have also been lucky enough to win a number of high-profile prizes over the years, and that has always been the strength of Kwela – combining established authors with new, up-and-coming talent. This is something that I would like to continue.

I don’t think that it has necessarily changed it that much as yet, but there is no question that it is changing it. Very soon we will have a generation of people who have grown up completely surrounded by accessible technology of a type that never existed before. The way they interact with one another and the world around them is bound to be shaped in some way by this, and it is impossible to deny that this is the case. If you want to reach readers you will have to interact with social media on some level – this is the future.

Along the same lines regarding blogs and (self-) promotion ... I read an interesting interview with Paige Nick from 2011 where your name was mentioned. Penguin South Africa was also mentioned, as was the Franschhoek Literary Festival, both literary institutions with which you share a history. If one uses this author as a case study of the creation and the “bringing into existence” of a new novel in this day and age it is interesting how much the landscape surrounding the publisher has changed. The role of the literary festival is important (meat world marketing?), as well as marketing methods unknown in the past, like blogs. Please let us have your thoughts on both these aspects: the literary festival and its influence on sales, as well as ... what shall we call it? ... self-marketing like, say, an author blogging about his or her new publication.

I have always loved the idea that an audience could see someone speak at a festival and download their book as they walked out of the venue – this is the best kind of impulse buy. However, lots of authors hate speaking in public – writing is necessarily a solitary occupation – and festivals really don’t work for some writers. Coupled with this is the fact that book sales are very rarely as fantastic as a publisher/author always hopes it will be at such events, and this can lead people to question the value of festivals. The reality is, though, that festivals and launches do generate publicity and interest and they are a tool to get people interested in local authors and local books – this was one of the main reasons that we started the FLF in the first place. Blogs and radio interviews, TV and reviews all do the same – they generate interest. And this, unfortunately, is the nature of the beast. Authors have always had to do some form of publicity – unless they somehow managed to create a reclusive mystique around themselves (like JD Salinger) – and the one good thing about technology is that it allows an author to do some, or even almost all, of this without having actually to appear on a stage in front of people – something many of them would rather not do. This said, the online industry as it exists in China, for instance, leaves me cold. The idea of authors basically writing their novels online – two updates a day in some cases (to keep their audience happy) – seems completely alien, even if it does mean that conventional publicity is short-circuited.