The chatter and tunage sprouting from the loudspeakers brim with energy and careful enthusiasm. Though the volume is cushioned by fifty or so voices in attendance, the nature of the sound is unmistakable - it speaks of venture, calculated bravery and, to the cynic, a youthful health unblemished by experience.

The source, where the sounds are born, is a small booth in the front left corner, facing the stage, bearing the word "Online" in neon red above a window on which the logo of Assembly Radio is proudly displayed. Inside the booth sit a couple of disc jockeys, while musicians take turns to enter the booth and brag their talents into the microphones.

"No other radio station has a live venue," says Pierre Coetzee, general manager of Assembly, one of the most popular venues for live music in Cape Town. "The guys doing a show will have an interview on the station directly after!"

Pierre has joined Kevin Kai and Alana Cremonte, co-founders of Assembly Radio, and me at a table near the main bar, which is closed tonight – thus, a quiet spot to conduct the interview. This is the launch night for the radio station, although it's been up and running for about three weeks.

Speaking from the perspective of someone who has spent many, many happy hours in this venue, I want to share in the unbridled glow of excitement that surrounds them. When Alana exclaims, "People want to listen to good music. Full ... fucking ... stop!" with her fist banging the syllables out on the table, I want to jump up and holler in agreement, believing fully and unquestioningly in the conquering powers of a perfectly placed chord progression or a vocal line that tugs mercilessly at your gut, streamed over a newly ascending airwave. This, surely, possesses the ability to transcend considerations for online radio like statistics on listenership numbers and sustainability regarding advertisement and brand initiatives. 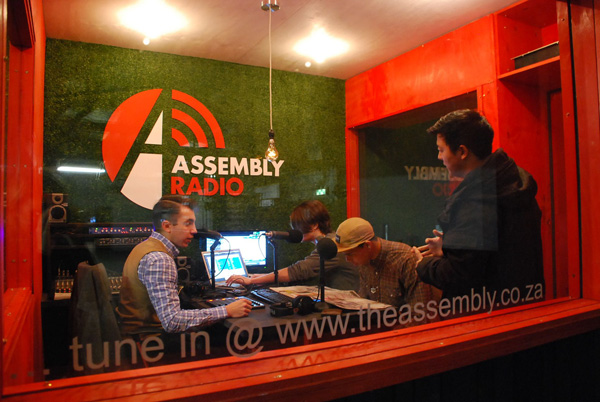 Yet, I find myself reserved and sceptical. Unfairly so, because it's certainly no fault of Assembly or the founders of Assembly Radio that online radio in South Africa was recently shaken to its core by an exposé regarding statistics on listenership punted by some prominent online radio stations in the country. An IT specialist, Shaun Dewberry, concluded after doing some intensive research that statistics announced by, among others, 2Oceansvibe radio and Ballz Radio, couldn't possibly be accurate. These stations punted numbers of tens of thousands of daily listeners, while, as it turned out, the real number was closer to a few hundred or so. Neither 2Oceansvibe nor Ballz could be directly blamed for this, though - they depended on the service provider Net Dynamix for the numbers and both radio stations have since severed their ties with this company. Read more about the exposé here.

In spite of these developments, Assembly Radio was launched confidently by Kevin and Alana. 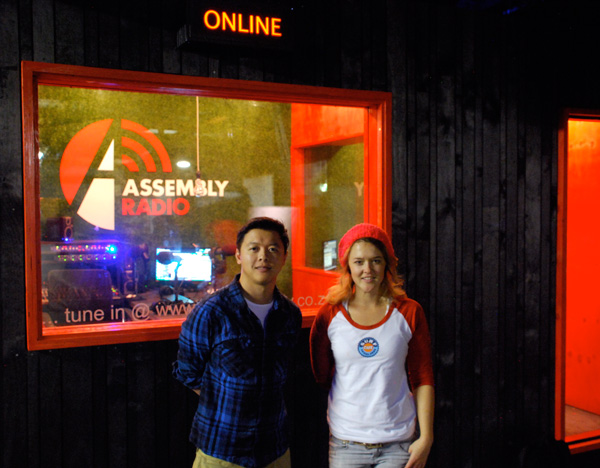 "We're monitoring our listenership through our own service," states Kevin, fully aware of the debacle surrounding Net Dynamix. "We are not attached to Net Dynamix ... but what the Net Dynamix thing showed is that people care about the online radio scene. People are interested."

"No one got into this to compete with, say, 2Oceansvibe," adds Pierre. "We wanted to create our own culture."

This culture, Alana emphasises, focuses on pushing South African music in general and specifically that which is relevant to Assembly's scene. "There's no specific genre, but there is an underlying indie vibe. There's rock, dubstep, R&B ... it's an encompassing umbrella, we're not excluding anything." With one focus, though: local, local, local.

The DJs will be opinion leaders in Cape Town, says Pierre, adding that, for instance, personalities from the popular We Are Awesome blog will feature on air. Furthermore, they will be streaming live shows of the big bands that perform at the venue. The names of Jack Parow and Die Heuwels Fantasties are mentioned.

Assembly Radio is a project of For Music Lovers, an entity run by Kevin and Alana. "The mission statement," says Kevin, "is creating awareness of South African music online."
"It's mind-blowing to me," says Alana, "that the music we play isn't being played by any other radio stations ... it's all about the music. The guys that are involved are creating a culture of music."

The longer I listen to them, the more my reservations about the prudence and timing of their launch dwindle. This is not mainly a business venture, this is mainly a music venture. Though Kevin dodges questions about exact listenership figures throughout the interview, I want to believe it's not to hide anything in particular - he's just shrugging it off as irrelevant ... for now. Those are worries for tomorrow, the reigning demeanour at this table dictates. Right now, it's about grabbing the essence of spreading the good word of original local music through the airwaves that counts - they consider themselves disciples in this tale of gospel.

And, hell, if it's anything like the live shows at Assembly, this could be something exceptional. Make it like the live show - drench my ears with sweat, bleed on to my cheeks and spill cheap beer down my back, Assembly Radio, and I will be a proud convert. For the time being, this eyebrow will remain fixed in its unfortunate arch. Circumstance, just damned circumstance.