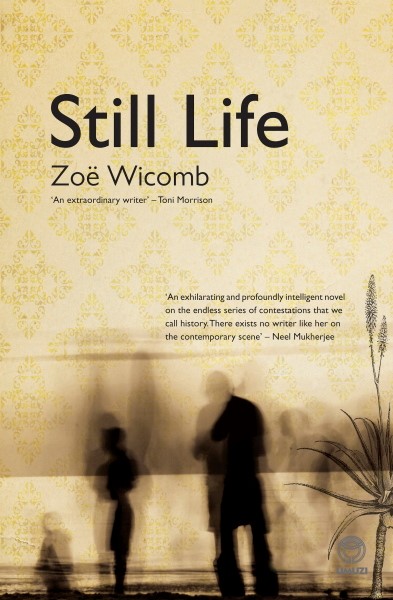 If there is a recent literary work that can serve as an important example for fiction writers, Still life, in my view, is it. For a writer like me, perhaps overly aware of the current debates around the limits of imagination, this text triumphantly shifts the boundaries of creative writing.

The back cover of the book provides the summary with the heading “A writer of rare brilliance” ascribed to the Scotsman, a Scottish newspaper (probably commenting on one of Wicomb’s previous works, but certainly applicable in this instance). The book is said to be a biography of Thomas Pringle (regarded by many as the father of South African poetry), but the narrative is told by a West Indian slave and an adopted Khoesan son, interrogated by a time-traveller exhumed from the pages of another much older novel by Virginia Woolf. The setting is contemporary, and the characters are resurrected.

But don’t be misled by the back cover. I was way into the second chapter and fast beginning to lose interest, not able to get a grip on what the book wanted to be about, when I read the introduction of the character of Nick Greene. It dawned on me: I had misread the first chapter totally, and I started at the beginning again – this time mesmerised. The “story” is the writing process itself – not a novel idea at all – but Wicomb’s use of the idea was, for me, simply superlative. For example: in the very first paragraph, she reflects on the thought processes of the writer before embarking on writing a manuscript: “Thus I try to keep my head averted from these powdery phantoms that stir and falter in the dark. But they remain, pleading wordlessly – or so it seems.”

This is a dual acknowledgment: there are things that the writer does not see, deliberately: “my head averted”, but they nevertheless exist and want to be brought to life: “But they remain, pleading ….”

As Derrida’s deconstruction theory analyses the text for what the writer does not see in relation to what she sees, one can postulate that Wicomb cuts through Derrida’s juxtaposition of the seen and unseen by acknowledging that the writer’s task is to surrender to the unseen, which is “pleading wordlessly”, and therefore deconstructs the literary theory inside the narrative – as a form of “narrative as deconstruction” – instead of the narrative being deconstructed by the theory. In my view, this is an admirable and novel shift in the process of fiction writing.

Out of the “powdery phantoms”, the characters are introduced, but with much thought, cross-examining, faltering and stirring: “… words leave me impotent, tongue-tied. Frankly I have no idea what to do.”

The first character has a form that is “wobbly, a strong vegetal whiff of desires rises from it, a greed for life ….” The reader learns she is Mary Prince, who remonstrates with the writer: “Get over yourself. It is not about you at all.” And this sets the tone, for me, where the writer slowly but surely disappears from the narrative. In the first chapter, the writer is still “I”, and in the second chapter, she becomes “the woman writer”, to disappear for virtually the rest of the book, surrendering to the unseen, so to speak, and only returning towards the end.

Pringle is then introduced closer to historical texts, but with Hinza, a boy adopted by Pringle who remembers things differently. These three are the only historical main characters in the book. In the second chapter, the fourth main character is introduced: he is not a real historical figure, but a real character from a real book. So, the writer decides to “place our project in the hands of Sir Nicholas Greene”. This further demonstrates the writer’s surrendering to the unseen. Greene is a character in Virginia Woolf’s novel Orlando, which is also a biography.[1] The Greene character in Orlando is also timeless in that he appears in different time periods, as he does in Still life. As in Orlando, he is a poem critic in this novel, as well.

The introduction of Greene as a character is, in my view, a further stroke of creative genius, providing a balance to the narrative. The main characters seem close to being anti-slave, anti-colonial and anti-racist. This includes Wicomb herself. By introducing Greene, a notable racist, a pro-colonialist and a nobility supporter, she provides a questioning narrative to the narrative of the main characters, but, in my view, also a wonderful narrative of the unseen. The portrayal of the character of Greene is done bare-fisted and straight-on, not fighting shy of the fact that he is a stereotype, but coming to grips with the very essence of a character like him. For example, Greene is allowed to say about Pringle:

A good fellow and not without talent, but he so does have the propensity of stirring things, of getting his betters’ backs up, the people he really should cultivate if he wants to prosper. (117)

Wicomb departs astonishingly from several fiction writing conventions. The narrator is not a single voice, but the combined voices of characters, without the usual “he said, she said”, thereby creating a single yet conflicting and questioning narrative. How valid is what we remember? How much is coloured by our experiences? Who are we to think that we can present people who are not us? Can somebody of colour who is not a South African talk about a South African white man? How much space should one allow for the conventions of the time? How does a novel read another novel? How does one live when the only evidence of one’s existence is a poem or inscription by a white man? How good-natured is a good-natured white man? How “contaminated” is a black boy raised by a white man?

But the brilliance of the book is extended beyond plot and structure – it is also part of the words: dialogue is not used with its associated punctuations, so the text is an effortless weaving with characters slipping between first and third person as clearly as water.

What is even more fascinating is that these characters, already created by other texts, now grow together, with Hinza – the youngest character – embarking on a journey to South Africa. Wicomb knots several strands: obvious ones like the destruction left by colonialism, the abhorrence of slavery, religious bigotry, racism, gender discrimination and misogyny. With these are the beautiful and elegant strands of historical facts, geographical realities, poetry and sub-characters, such as Mrs Pringle, her sister Miss Brown and others. There is also Vytje, another sub-character from a poem of Pringle himself, which provides some more of the unseen and, in my view, delivers a unique perspective of colonial life that was previously unsaid. These themes are undeniably contributing to modern-day phenomena such as Black Lives Matter and can be viewed as a stark reminder that inequality of race and gender is as prevalent today as it was under colonialism, yet its manifestations are deeply complex.

Although the book’s setting is London, it is also unmistakably South African. This Wicomb achieves by her description of the South African landscape in its own vernacular, like Baviaansrivier, Zuurveld, Katrivier, Slagtersnek and many others; also, people references like Kaatjie Kekkelbek, Baas Karel, Nooi Janet, Oupa en Ouma and such. This component brings the novel closer to home and provides a stronger empathy with the characters, making this book thoroughly enjoyable to read.

Finally, I am wondering to myself: set in the modern-day dealing with relevant everyday issues like literary agents and a struggling writer, with characters who are either ghosts or from other texts, could this possibly be a new proponent of magical realism? I do not know the answer, but can’t remember when last I read a book that so completely broke all the conventions lesser mortals like me agonise over. It will certainly play on my mind for many months to come.