In Still life, Zoë Wicomb creates an author who reluctantly sets out to write a biography of Thomas Pringle. Instead of presenting a traditional historical plot line, the novel creates a number of characters who narrate their thoughts. Izak de Vries interviewed her. 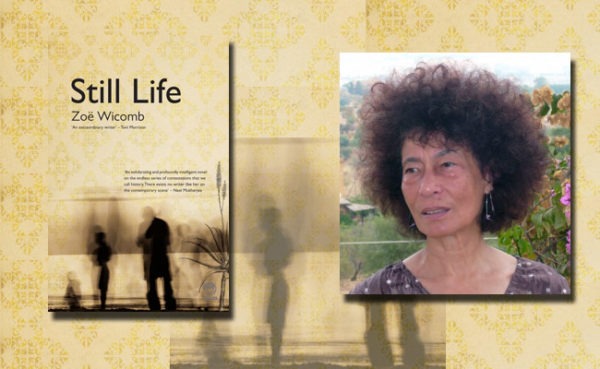 My first question centres on a fairly early assumption in your novel that Pringle is well known in South Africa. May I admit that I knew very little about him? I even attended Rhodes University and never bothered to find out who Thomas Pringle was, despite knowing students from the residence that has his name. Your novel prompted me to read about him, and I was quite fascinated by his short life. How did you choose him as an object of research? Or did his ghosts choose you? 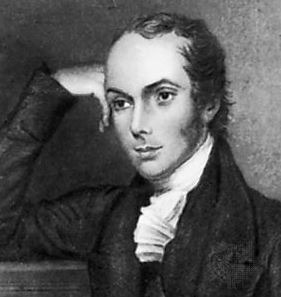 Something to do with your youthfulness, perhaps? When I grew up in the 1950s/60s, every schoolgirl knew of Pringle. My history textbook lionised him as the father of South African poetry, meaning poetry in English, and also as champion of a free press.

Pringle and his friend Fairbairn started the first newspaper at the Cape. But I gave him no thought until the ’90s when I read John Coetzee’s critical essay on his poetry, and thereafter my interest accrued rather slowly.

At Stellenbosch, I borrowed Pringle’s Narrative of a residence in South Africa from Dirk Klopper, who had invited me there as visiting professor and who had written on Pringle. A few years later, I visited the Amazwi literary museum (then NELM) to look at Pringle’s papers. It was his letter requesting permission to take the Tswana boy Hinza Marossi to London that piqued my interest. Reading Mary Prince’s slave narrative, published by Pringle in London, settled it: I would try to write a novel about them.

As a young student of English lit, I had come across the influential literary magazine Blackwood’s, founded by Pringle in Edinburgh, and it interested me that in Scotland he is not known at all, whether as poet or as abolitionist.

The author in the novel is rather reluctant to tackle the task at first, even describing rituals about chocolate ball wrappers being elaborately shaped in an effort to avoid writing. The burden is described on the first page: “The responsibility is simply too heavy to shoulder ….” Do you share the same reluctance to unearth the past when you sit down with a new novel?

If you mean writing a new novel, the answer is yes. I do find it impossibly difficult to write, and it is not until I’ve beaten out a first draft, and thus finally discover what the novel is really about, that there is any pleasure to be found in the various redrafts. Other than knowing that I did not want to write a historical novel, I struggled more than usual with an approach to this one. Dramatising (or exploiting) my own inability – and also the sense that there is an inexplicable desire to do something that, at the same time, you don’t want to/can’t do – became a point of departure for my narrator.

The title. A still life normally denotes a rendition of lifeless objects. In this instance, your Still life creates animated characters, long dead. I love the twist. Would you like to say more about it?

Yes, precisely. I had in mind the French term, nature morte, which literally translates as “dead nature”. The subject is thus re-animated through representation in a painting. Similarly, I hoped to re-animate my dead characters through representing them in a novel. I was also interested in the extended figurative use in English, where the term refers to being sickly or lifeless, as in the case of my Pringle, who fades out early in the novel, unable to withstand scrutiny.

Many people who were close to Pringle get to talk about him, yet his voice remains quiet. Why keep the man who fought for press freedom muted?

There is plenty written about Pringle. His voice resounds through South African history and continues in the work of South African literary historians and critics. That Pringle is not my primary concern. He is dismissed early in my novel when his life is examined by marginalised characters, an ex-slave woman and the Tswana boy he somehow acquired; in other words, he also becomes a vehicle for examining the peculiar machinations of colonialism – which includes Pringle’s own later ambivalence about the colony.

While Mr P remains mum, the voices of a few others take a life of their own. Mary Prince, a grumpy ghost, dictated her own autobiography, one which Pringle published. I looked it up – thanks to your novel (https://docsouth.unc.edu/neh/prince/prince.html). She spoke. Another wrote down her words. Your in-novel author, however, is less eager to offer her a voice. How do you choose all the layers when you set out to construct a story?

At the risk of sounding ridiculous: I don’t choose, and at the outset there is only the bewildering mountain of source material. All I knew was that I did not want the ready-made generic conventions of the historical novel – thus a struggle with various attempts until I somehow arrived at this solution. Of course, it does not all come at once, but rather at various stages and through the daily process of writing. (On a number of occasions, the project stalled, and for extended periods, too.) It is in that sense that the story constructs itself. Once it achieves its shape, the whole thing has to be reshaped and revised in relation to what finally turns out to be its central concerns. 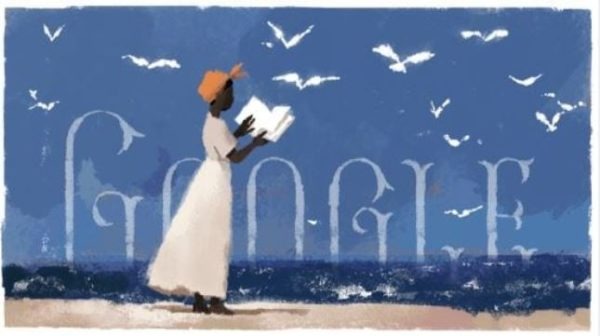 The historical Mary, a slave, said that some of her happiest times were when she was treated as “quite a pet” and was called a “little nigger”. Still life contains a number of references to the harsh words and descriptions of the past. Is it part of not forgetting where we come from?

Mary’s narrative gives insights into how the slave child is born into a slave mentality; it is also testimony of how no sentient adult could accept being deprived of her freedom. The unspeakable conditions of Prince’s life as a slave could never have been forgotten by her; she wanted that life recorded. So, yes, the least we can do is to remember that nasty period in history – and to be alert to the slavery practised also in the world today.

Pringle, then secretary of the Anti-slavery Society in London, was drawn to her story precisely because of his own experience of slavery at the Cape, so that unlike his contemporaries in Britain, he did not think her account to be fictitious. The poor man was horribly lampooned and reviled for having published Mary’s story.

Hinza Marossi is another amazing character in Still life. He was five years old when he ran away from the man who had kept him as an “indentured servant” (barely more than a slave). The Pringle couple took him in and possibly raised him as a son. Yet, he died at the age of nine. You give Hinza a new voice; you raise him up to become quite a strapping youth. Why?

Since Hinza was central to my project, he had to be resurrected as an adult in order to explore the ontological condition of a black child taken into a colonial household. I also wanted Hinza himself to question the way in which Pringle acquired him, that is, from the position of affectionate adopted son. And, really, the only material he has is the poem, which has to be interrogated by an adult. 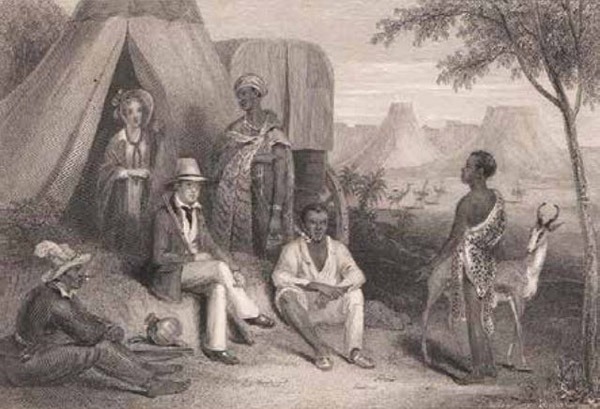 Hinza Marossi presents himself to Thomas Pringle (Source: Natalia no 48; "A San child of the Drakensberg and other child exiles")

One fascinating part of Hinza’s story is Pringle’s own account of their first encounter, written down in the poem “The Bechuana boy”:

When from the bosom of the waste
A swarthy Stripling came in haste,
With foot unshod and naked limb;
And a tame springbok followed him.
With open aspect, frank yet bland,
And with a modest mien he stood,
Caressing with a gentle hand
That beast of gentle brood;
Then, meekly gazing in my face,
Said in the language of his race,
With smiling look yet pensive tone,
“Stranger – I’m in the world alone!”

Your Hinza challenges the notion of the springbok; readers should experience it themselves, and your Hinza certainly is not “bland”. Pringle took poetic licence, pun intended, and a number of British authors wrote lovely stories about young black children who had died at an early age in the UK. Did you have fun challenging the beautification of reality from the archives?

I suppose the best-known black child of the 19th century is Harriet Beecher Stowe’s sentimental, long-suffering Topsy, conceived as part of her argument against slavery. For all Stowe’s worthy aims, she clearly was unable to put herself in the shoes of that child. So, yes, such an unrealistic portrayal of a child in that context had to be challenged.

It turned out that Pringle had several accounts of how he had acquired Hinza, that his letters to friends reveal the conflicting stories. There was clearly something to conceal. Hinza’s escape from the farmer who held him as an indentured servant was in all probability a fiction, the wicked Boer a convenient and ready-made foil to the “Stranger’s” kindness. So, my Hinza would not die in London; instead, as an adult, he questions his status in the Pringle household as well as the means by which he came to be there. It is the ambiguity that interests me. It appears to be true that the childless Pringles came to think of him as a son, hence the boy’s love for them.

Another delightful twist of historiographical metafiction in Still life is Sir Nicholas Greene, a character “borrowed” from Virginia Woolf. What attracted you to him? 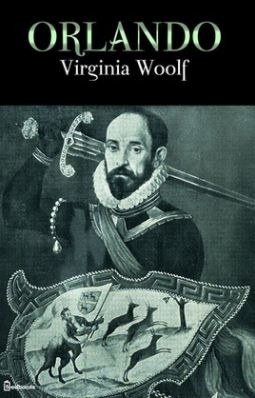 It was on one of the occasions that the novel stalled – quite early on. Woolf’s Orlando is one of my favourite novels, and for some reason I decided to reread it, perhaps because I was subconsciously drawn to its time-travelling aspect. Eureka! I somehow knew that Sir Nicholas would be the one to break the deadlock, to progress the novel, and not only because he is a seasoned time-traveller. Greene also represents the English class consciousness and snobbery that Pringle, too, as a Scot from a farming family, was subjected to by the corrupt governor and his cronies at the Cape. Snobbery and white supremacy do make me laugh, so the possibility of Greene bringing humour as well as a ready-made fictionality to the story was irresistible.

You grew up in Namaqualand, and now you live in Scotland. Is there a small part of Hinza and Thomas Pringle in you?

Ah, Namaqualand – and also Cape Town, where I went to high school. Does one ever stop being homesick? I imagine that there is a small part of me in all my characters, even – dare I say it – the cringeworthy Nicholas Greene.

You taught creative writing for a long time. How did you encourage your students to be more enthusiastic about their tasks than the biographer is in your book?

What a wonderful question – that does make me laugh. And you’re right. As a teacher, you do not dwell on yourself and your own insecurities. Enthusiasm for writing is engendered by the many wonderful examples of inspiring literature, so the teaching of writing is closely connected to the teaching of careful reading, although I do think it important to stress that writing involves hard work and a routine that should be sacrosanct. And, most importantly, tenacity, since it is an act of faith – the belief that things will come right in the end – well, mostly. If only I always followed my own advice.

Photos: Zoë Wicomb and the Translocal

The One That Got Away: Zoë Wicomb engages with elusive stories