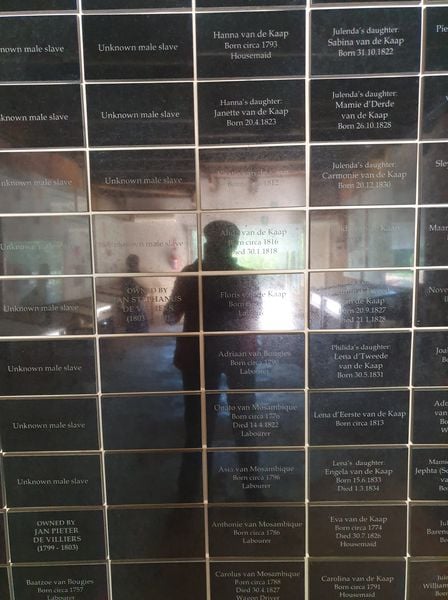 Spending one night in the upmarket wine and tourist town of Franschhoek can give one a striking perspective on the many faces of post-apartheid South Africa.

Driving into Franschhoek one sees the shiny, metal structures of the Langrug informal settlement on the rocky and rugged Drakenstein mountains. On our first evening we also witnessed the spectacular beauty of a blood red sunset over the mountains. That evening, my wife drew my attention to a copy of the Philip Bawcombe’s water colour painting, “Slave Bell,” on the wall of our B&B. The London-born artist, who was born in 1906 and died in 2000, depicts a sentimental farm scene in which a black “domestic worker”/slave attends to two little white girls in Victorian bonnets and dresses, while two male black workers/slaves toil in yellow overalls next to the Cape Dutch house and Slave Bell. What does this painting, brazenly displayed in a B&B in 2021 reveal to us about our relationship, as South Africans, to our slave, colonial, and apartheid pasts?

Later in the evening I watched a YouTube interview with Susan Neiman about her 2019 book Learning from the Germans: Race and the Memory of Evil. Neiman makes the compelling case that the United States and Britain could learn an enormous amount from the ways in which Germans have “worked through” (Vergangenheitsbewältigung) their Holocaust past. In the interview she refers to how, on December 7, 1970, German Chancellor Willy Brandt fell on his knees at the memorial to the Warsaw Ghetto as an act of repentance and reconciliation for the Nazi genocide. The “Warsaw Genuflection” was dismissed by many as an “empty gesture” at a time when the majority of Germans seemed unwilling to confront their complicity in the Nazi past. For Neiman, it was the 1968 generation of militant student activists who directly confronted their parents and grandparents about this. The German Government only officially faced this past on May 8, 1985, when the West German President Richard von Weizsäcker, a former German soldier during World War Two, publicly stated that May 8, 1945 was the day that all Germans were liberated from Nazi tyranny. Since then, Neiman argues, Germans have initiated serious and sustained processes of “working through” this devastating past. Yet, it was only very recently, in the wake of the brutal murder of George Floyd, that the US and UK seriously began the kind of “memory work” that Germans have been doing for decades.

Although school textbooks and the Truth and Reconciliation Commission may have helped South Africans better understand the histories of land dispossession, the Frontier Wars and the devastation of apartheid, it would seem that the history of slavery has somehow gone beneath the radar and much work still needs to be done to extend public knowledge of this aspect of the country’s traumatic past. Only then can the process of working through this buried past really begin. 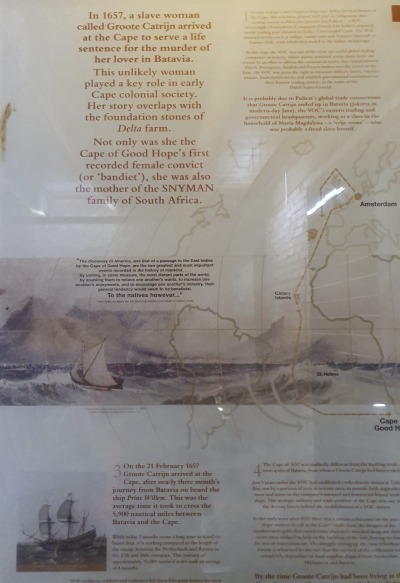 During our short visit to Franchhoek we also revisited the Solms-Delta wine estate and its Museum van de Caab. The museum provides a local history of slavery on the farm as well as personal narratives of slaves who once lived there. The Solms-Delta project goes beyond “working through” the past in museum displays. It is also part of a decade-long social and economic transformation programme whereby farmworkers have become co-owners of the wine farming enterprise. We were told by one of the waitrons at the restaurant that despite the economic fallout of the Covid-19 crisis, the Solms-Delta transformation programmes was surviving through a state-supported business rescue initiative. She also told us that she had grown up on the farm and had benefited from numerous hospitality industry training courses funded by Solms-Delta. The Solms-Delta experiment suggests that “working through” traumatic pasts also needs to include attempts to transform historical legacies of transgenerational racialised poverty.

While white South Africans clearly have much to learn from the Germans and from reading Neiman’s book, social experiments such as Solms-Delta can also provide lessons on the relationship between “memory work” and developmental initiatives that seek to transform the material realities of the lives of the descendants of those who experienced the devastation of these histories of slavery, colonialism and apartheid.