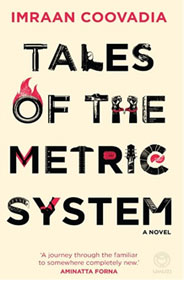 Buy Tales of the Metric System from Kalahari.com.

Without really knowing each other in person, Imraan Coovadia and I go back a long way. For several years we’d rubbed shoulders on the Sunday Independent book page, reviewing books under the editorship of Maureen Isaacson. I find Coovadia – the critic – frighteningly eloquent and gutsy, if careless or needlessly provocative at times. But his range of literary and cultural references always impresses. His arguments are never lukewarm. Even if you might disagree with his opinions, Coovadia’s critical writing is challenging and thus vital in a rather stale and often too acquiescent literary environment.

Despite this good track record of co-operation and admiration, Imraan Coovadia the – novelist – and I did not get off to a good start. The first novel of his I read I wanted to throw against the wall every few pages. It frustrated me no end and I finished it only out of respect for the author, hoping against hope that the ending might allow me to reconsider my initial reactions. Unfortunately it brought only a sense of relief that my suffering was over.

It might surprise many that the novel I am speaking about is Coovadia’s most critically acclaimed title, for which he received the Sunday Times Fiction Prize and the University of Johannesburg Prize: High Low In-between (2009).

No prize could convince me to look at the book again, and for a few years I stayed away from Coovadia’s other novels altogether. But when the first news of Tales of the Metric System reached me earlier this year and I heard the author speak about it at a launch, I felt that I was ready for another try. And then, when asked to review the book, I decided to read all the titles I had missed, beginning with The Wedding (2001) and proceeding to Green-Eyed Thieves (2006) and The Institute for Taxi Poetry (2012) before, at last, embarking on the latest.

It has been an interesting catch-up reading marathon. I basked in the humour and lush storytelling of The Wedding, enjoyed the craziness of Green-Eyed Thieves, and thought the idea behind The Institute for Taxi Poetry intriguing. Not once did I feel the need to throw anything across the room during all those hours of engaging with the books. What struck me, however, was that apart from the protagonists of the debut novel, none of the other characters captured my imagination. I remained indifferent to their fates. It was solely the strength of Coovadia’s prose that for the most part carried me along.

Having read all of Coovadia’s novels now, I can say with certainty that, for me, Tales of the Metric System is by far his most accomplished. It is definitely one of the most profound fictional takes on South Africa’s transition from the horrors of the apartheid era to the uncertainties of the present. Spanning four decades between 1970 and 2010, the novel captures the spirit of all crucial historical moments of the period by focusing on the lives of a few people, real and imagined, whose stories are intricately interlinked.

In the early 1970s, South Africa adopted the metric system which was brought along by its “harbinger”, the new currency of the rand, introduced a decade earlier. Tales of the Metric System unfolds over ten chapters which are set in ten different years of the four decades in question. The novel follows the trajectories of a few sets of characters from numerous walks of life: activists, crooks, opportunists, artists, businessmen, dreamers, beggars, politicians and digital natives. Their lives are woven into a remarkable tapestry of contemporary South African society.

Tales of the Metric System opens in 1970 when the young Paul Rabie is threatened with expulsion from a prestigious private college for the possession of alcohol. It is suggested to his parents that a contribution towards the new music building might help his case, but his mother, Ann Rabie, and stepfather, Neil Hunter, do not take the bait. At the same time, Ann realises that her marriage to Neil is over when she observes one of his students, Nadia Paulson, typing up notes for her husband in their house. Politically active, Paul is under constant threat from the security police. There are rumours that one of his friends is an informer.

In 1973 Victor Moloi becomes a “criminal overnight” when his pass book goes missing. Victor is assisting with the staging of a subversive play which is based on the idea of false accusation which Neil Hunter had passed on to the playwright. Six years later, Yash, a frustrated Indian rocker whose skin colour stands in the way of a career in music, contemplates suicide.

In the next chapter, the story moves to 1985 and the Soviet Embassy in London, where we encounter Ann again as she accidentally witnesses an act of treason. In 1990 the story returns to a township in South Africa where a young thief, also suspected of being an informer, is hunted down by his community and punished for his crimes.

The next two chapters chronicle the Rugby World Cup final of 1995 and the aftermath of the Truth and Reconciliation Commission. In 2003 a man close to the presidency dies when he refuses ARV treatment, denying the connection between HIV and AIDS. Officially, his diagnosis is that his “nutrition was poor” and that he needed only “vitamin injections”. An outraged doctor comments: “They were letting a man die in a room two floors above their heads because the politicians didn’t believe in the existence of his disease.”

Seven years on, a teenager’s cell phone is stolen while she is buying a vuvuzela to cheer on Bafana Bafana’s first match against Mexico in the 2010 Soccer World Cup.

The final chapter returns to 1976 and Neil, Ann and her son Paul. Children are dying in the Soweto uprising, television begins broadcasting in South Africa, the ANC is building training camps for MK soldiers in Angola, and the National Party buys nuclear reactors from the French. In the midst of all the chaos Paul receives a daunting warning.

Like coloured shards in a kaleidoscope the characters are shifted from one episode to another, forming elaborate patterns. In each of their appearances they chart the socio-political developments of the country from diverse perspectives. Their highly nuanced intimate and emotional responses to the events illuminate the historical backdrop with striking clarity.

Despite the elaborate construction of the narrative, there is an ease with which the stories are conveyed and intertwined that makes for a riveting read. Whereas I could appreciate some of Coovadia’s previous novels on an intellectual level and for their fine writing, they never moved me. In comparison, Tales of the Metric System has head, heart, bowels and soul.

A Russian character in London proclaims: “(N)ovels are more important than ever … because they enable us to exercise our minds … allow us to step back and see where the history is taking us.” Coovadia’s latest testifies not only to the truth of this statement, but also to so much more. It is a novel that both enlightens and delights.