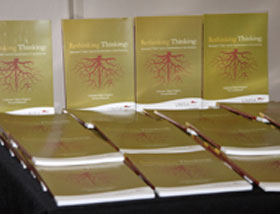 Rethinking Thinking: Modernity’s “Other” and the transformation of the University
Catherine Odora Hoppers and Howard Richards
Unisa Press, 2011

This text is part of the Taproot Series – aptly imagining the need for a new growth in education thinking which would draw nourishment from diversity, with this text setting a tone for the series. The intention is “to speak responsibly in the world (...) at this crucial moment of its history”, as a criticism of modernity, “not to destroy it but to transform it by enlarging it” (vii). This the authors do by problematising practices of modernity, and rethinking thinking on/in higher education in terms of the role of indigenous knowledge systems in the subject areas of law, economics, science and education (the latter not included as a separate chapter).

The strength of this text is in the ways in which the need for change in higher education is problematised, and strategies for much needed responses argued. Thinking as a human activity has been elevated as the core of what universities are about and of what people do in universities, and the problem being that thinking has become “knotted”, “tainted by toxic elements”, “excusing the inexcusable”, and/or “using disciplines as alibis for not making adequate responses to society's challenges” (1).

The focus on the problem with thinking about universities is a focus on the question how it is that universities have not really been transformed, and what can be done about it. How is it that, despite the political changes, the policies of democratisation and changes in landscape and equity profiles, the sector is still not relevant, responsive and contributing to human development the way it can/could/ought to. How is it that much has remained unchanged, that universities are becoming more and more market-driven and neoliberal in make-up and operation, and that they are competing to become more like European/American models?

The focus on the problem of thinking within universities is about their core functions and processes, ie forms of research, teaching and community engagement, and the problematic thinking in these areas which grows and reinforces the untransformed trend of “othering”; modern forms of colonisation, neoliberalisation, marketisation, and maintenance of the status quo which continues to exclude.

The authors are extremely concerned about the issues they identify, and their agenda is clear from the outset. On page 3 they write: "We do not want anybody to escape encountering our ideas. We do not want (...) anyone to excuse themselves from responding with the pretext that they could not understand." They want to be clear to minimise non-response to their ideas.

The problem with this, however, is that clear writing is no guarantee – you can be as clear as crystal about Derrida, for example, but discourses and the language (English) still hold us captive and work in ways that include/exclude. The greater challenge is for the ideas in this book to find their way to public engagement and civic participation in talking about the issues, restating them in local conversations.

This need for conversation, interaction, indaba, and collaborative work is acknowledged by the authors. The central onslaught and push for engagement is to rethink thinking, a challenge that will perhaps not happen easily in South Africa, since so many stakeholders are content with and benefit from the status quo – they have too much to lose to make changes, so many years after the first democratic government.

The problematising purpose is also pursued by means of exposing the politics of “othering” in modern forms, as is evident in current policies and practices of universities. This is the politics of maintenance, where people argue that the education system in South Africa has been transformed, and the (party) political changes are sufficient – there is no need for change. This view does not hold water, because according to the authors, "Scholarship has (...) become distant, antiseptic and removed from the experiences of the lived world" (3). We observe “an ecology of knowledge that is shredded” (84), and a science that is “alienating”, “exclusionary” (85).

The call for the transformation of higher education is mostly well argued. For example, the argument in chapter six is that science is practiced and taught in schools with its "ever mounting baggage of alienation, exclusion, hierarchisation and epistemological disenfranchisement". This makes people "cry out in despair" (84). Science is “dehumanising” (87), being attained by processes and methods of globalisation and modern forms of colonisation. Thinking needs to be rethought, also because of "cognitive prison walls (...) sealing off the academic and policy communities from society” (89). This amounts to cognitive injustice, a strong theme throughout the text. The authors draw on Visvanathan’s writings on the social consequences of cognitive dominance and the need to interrogate “the dangerous romance with the politics of knowledge transfer from the North to the South” (89). This is an immense challenge, given Visvanathan’s idea of the “tight architectonic” that exists, resisting transformation (89). (See Visvanathan 2009.)

The criticism against the status quo in higher education in South Africa should come as a surprise to many academics/researchers who contributed to the creation of the current system. The allegations are by all means serious, and one wonders how it came about that few/none of these observations were included in the original research during the days of the National Education Crisis Committee and ANC policy working papers and the original green paper and white papers on higher education (see references to these in the official documents, Department of Education, 1995; also Bunting 1994). In these documents we’ve seen emphases on restoration, democratisation and the need to normalise/humanise education. But transformation seems not to have proceeded as expected: neoliberal ideologies are increasingly dominating the common sense idea of the role of universities, which to a greater or lesser extent boils down to “possessive individualism”, in the words of Carlos Torres (2009).

Nevertheless, as a response to the current crises, the book progressively builds a vision that is enticing, inviting and challenging. This is a vision of “humanisation” (40), of “unity” (41), of “respect for diversity” (42), going beyond similar visions articulated in South African higher education policies.

Supporting the vision, some specific goals have been articulated: "We have to produce transformative knowledge” (40). “We have to articulate philosophies and engender practices of restorative action of universities in relation to society" (41); “a consensus framework for transformation” is needed, and we have to work with "inclusive paradigms" (42). In this process we have to accept that “European knowledge systems are part and not all of knowledge” (42), requiring that we rethink and dialogue with other forms of knowledge.

The chapter on “transformation by enlargement” (chapter three) unpacks the vision and proposes ways forward / strategies in terms of specific concepts. Enlargement is described as space for participation by modernity's other, as a meta-methodology for transforming universities (39). This is to be done by transforming methodologies which are currently dominating universities and other knowledge-producing and disseminating institutions, “enlarging” them. This means (following Kuhn) pointing out anomalies and concrete alternatives (39, 40), advocating a multi-paradigm world (40), following examples of workable corporate experience, humanisation, and working towards pragmatic consensus (42). In these actions, visionaries in diverse cultures need to be involved, not to think in the same words and thought patterns (44).

The call for engagement in the process of transformation by enlargement is fresh and authentic, inviting stakeholders from all walks of life to participate in discourses of their own, and for universities to “open up their paradigms” (35).

Readers of the text will most probably have several questions about issues of agency in the text: Who are we talking about? Who should be doing rethinking? Who will be encountered when thinking is re-thought? Clearly there is the distinction between the “we” and the “other”: the we as modernity, but also as all of humanity (44), and the other as "modernity's other”. These broad categories need to be refined and the complexities of relations among stakeholders unpacked in further thinking.

The text is filled with some powerful metaphors and creative articulation. These insert layers of beautiful meanings into the text. They also invite creative responses and extend the possibilities of academic speak. For example: “We have to train attention to be laser sharp” (6); there is a need “to clear the ‘nasal passages’ of the academy” (1); and on page 7, “Thus, while the bandit kings were armed with the crude cognitive instruments of racism, the next generation of colonialisms targeted the mind.” It places the finger of all South Africans on the pulse of "mutual vulnerability" (4).

Finally, the call for the transformation of higher education and for engagement with issues raised by the authors is strong. They set a new pathway, hinting at what the footprint of higher education could be, way beyond the limited policy thinking of the founding fathers of the young democracy, restoring, re-imagining, transcending the limiting time-frames of policy imaginations.

Participation in rethinking thinking in and about higher education is an imperative not to be ignored. This holds, too, for academics such as me, who grew up in a racially privileged working class community, experienced schooling during the ‘50s/’60s in privileged whites-only schools, started teaching Afrikaans in an all-white high school in 1976, and worked as a university lecturer, researcher, NGO facilitator, research educator and text writer in times spanning the political transition. Mine are the views shaped by the "toxic Western precepts" (89) and the lived experiences during the 1994 transformation. The challenge is to accept the call for rethinking thinking, restating narratives, and to find ways to contribute to transformation (see Van der Westhuizen 2013).

This book is a passionate call – for community, for a common story, for a science, scientific work with a heart, of science and knowledge production, of rehumanising science; and the question is: How may all contribute? At the same time, I hope, the text can be the conversation catalyst it deserves to be – for this to happen, readers will take out / latch on to key conversation questions such as: Can universities understand the need for human development? When do we know universities are serving the greater good? Can the common sense / dominant idea of what universities should do, change?