I first spoke to Stephen Gray in August of 2017. I was standing in a corridor of the Bloed Street Mall in the Pretoria CBD, struggling to hear over the echo of voices (I had just stepped out for lunch from a morning of research at the National Library around the corner). I had no idea what to expect.

I was a second-year PhD student, back then, in South Africa for two months to do my pre-dissertation fieldwork. When I was applying to my programme in late 2014, I had never been to South Africa before. When asked to provide the admissions committee with an idea of what it was I might research, I remembered how I had first become interested in the country, watching old clips of Pieter-Dirk Uys and Leon Schuster – and, more recently, Trevor Noah and Loyiso Gola – on YouTube when I was in high school. So, I wrote that I wanted to study the history of South African humour, because it sounded exciting and original, but I had no idea what that would mean in practice.

My advisor suggested that I focus on pre-1948 South Africa, and it took three semesters of graduate school before I got my first real lead: a reference to an obscure early 20th century playwright named Stephen Black, a writer of satirical plays on topical South African subjects. There was even a published collection of his plays that I could access in the United States. The editor of that collection? Stephen Gray.

We spoke briefly on the phone that day, and he later told me that he had always been a bit sceptical of American scholars. They have a tendency to interpret things through the lens of their own country’s history, he said. They don’t appreciate South Africa’s intellectual traditions.

He told me all this in the parking garage of his building in Killarney at our first meeting, just across the street from the mall where, he explained, the Jewish-American-South African mogul IW Schlesinger had set up the first motion picture studio on the African continent. Later, from his hatchback, he pointed out Whitehall Court, the fabulous mansion where Schlesinger had once thrown lavish parties – it was not uncommon back then to find giraffes on the rooftop. Not only was it an extraordinary anecdote, but it spoke to the intensity of Stephen’s awareness of history and of Johannesburg’s history in particular. We went to a local garden centre for lunch, and I apparently made a good impression. We exchanged contact information (though the man didn’t use a computer or even a cell phone), and after I had my first article published in the South African Theatre Journal, he sent a letter of congratulation to my home in the United States. When I came back to South Africa for my main fieldwork, I knew he would be the first person to call.

I had the honour of making several long visits to Stephen in 2019. They always followed the same pattern. Since he didn’t have a cell phone, I would wait for his little red Volkswagen to arrive at my gate, and we would be off. The walk up to his flat would sometimes be preceded by comments about the various flowers and trees of the neighbourhood, and I felt slightly embarrassed if I couldn’t recall the name of a plant he had pointed out to me on an earlier visit. And then there was his flat itself – what a flat! Stephen explained that the bulk of his archive was in collections at the University of Texas and what is now the Amazwi South African Museum of Literature, but what remained was awe-inspiring to me. It seemed like he had a box – sometimes multiple boxes – for every South African writer who had ever published, crammed full of old articles, manuscripts and notes. He would curate the collection for me on each visit; when I arrived, there would be a neat line of books, notecards and folders relating to things he thought I might like to see. I was allowed to spend hours poring over the material, either before or after our obligatory lunches, which were filled with discussion of the literary history he had devoted so much of his life to exploring.

I met Stephen only in the latter part of his life, and I don’t presume to have known him in the way his lifelong friends and loved ones knew him. But, as someone who looked to him as a mentor, I felt a kindred spirit. This was a man with an incredibly interesting personal biography, who had been educated at Cambridge and taught by no less than Kurt Vonnegut, who had never lost his sense of wonder and excitement about the city of Johannesburg and its artists. His knowledge of the city and its residents was encyclopaedic but never overshadowed by the nostalgia one sometimes encounters in white people who came of age before apartheid ended – the sort of people who supported an end to apartheid, but believe that Johannesburg died when the white Bohemias of Hillbrow and Yeoville vanished and the CBD became choked with rubbish. Stephen may have presented as a model product of St Andrew’s College and Cambridge, but he had the heart of an adventurer. Nothing was off limits for his curiosity in a city where danger, adventure, good, evil and astonishing heights of beauty and ugliness seem to flourish on every corner.

I will never forget the last day I spent with Stephen. He had promised to take me to find the old haunts of Stephen Black and his protégé, Herman Charles Bosman. On my visit the week before, he had expressed uncertainty about some addresses, and by that morning I felt bad that I hadn’t looked into them on my own. Nevertheless, that morning he pulled up to my gate with a complete list of a dozen or more stops for the day, starting with the graves of the two men. He had picked some flowers for us to lay there. Bosman’s took the longest to find; the Dutch Reformed section of Westpark Cemetery is huge, and we spent about half an hour walking slowly past the graves of dozens of Bosmans before finding Herman’s small triangular obelisk. Stephen Black’s grave in Brixton Cemetery required no small amount of tramping through overgrown grass seeded with broken glass, litter and God knows what else. Yet, find it we did – a simple stone, low to the ground and with a simple inscription, which had been sitting undisturbed for 88 years. 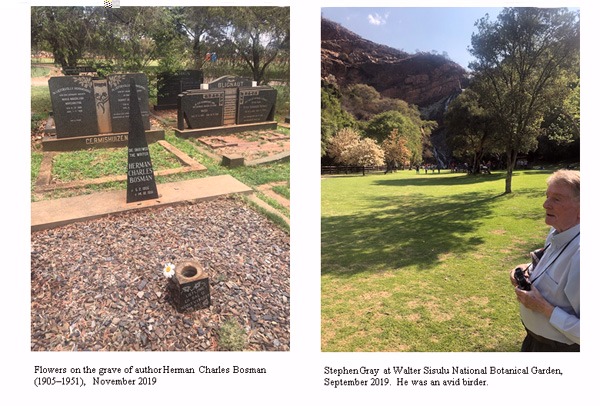 Later on that morning, we took Yeoville and Bez Valley by storm on the hunt for more Black- and Bosman-related sites. After tracking down the house on Becker Street where Black died (it still stands, totally unmarked), we stopped at a tuck shop for refreshments in a neighbourhood which in the 1930s was mostly Jewish, but now is home to immigrants from all over the African continent. I couldn’t help but be reminded of Stephen’s poem “Apollo Café”, written about his long-time home suburb of Mayfair:

We got caught in the rain that afternoon while visiting Bosman’s old alma mater, Jeppe High. We chatted with scientologists outside the L Ron Hubbard House on Linksfield Ridge. I was a bit worried about him when we walked the many steep steps up to the Scottish Horse War Memorial in Kensington, but the view was magnificent.

With Stephen’s passing, a giant of South African letters has left us. Though scholars will be able to comb through his papers and research material at the Amazwi South African Museum of Literature and the Harry Ransom Center at the University of Texas, those who had the privilege of spending time with and learning from him will recognise the magnitude of this loss. It is hard to imagine what our understanding of southern African literature in English would be without his contributions, and that’s before considering his creative work, his poems and novels and his editorial projects that gave a new lease on life to the work of other authors. For Stephen Gray, the written word was ceaselessly exciting, and that spirit of enthusiasm is one we should take care to maintain.

South Africa has an uneven record of remembering its literary greats, and no one was more keenly aware of that fact than Stephen. Working at the old Rand Afrikaans University at the height of the apartheid era was a blessing in disguise, he once told me, because that institution’s attitude towards English literature was so apathetic that he could embark on projects that would not have been possible at English-medium institutions like the University of the Witwatersrand, which infamously refused to accept Bosman’s papers from his widow because, in the 1960s, they still considered South African-born authors beneath them. As we approach what would have been Stephen’s 78th birthday on 30 November, I hope we are able to honour his memory in a lasting way, so that he does not need to be “rediscovered” two or three generations from now, in the way that he rediscovered so many important South African authors in his own day. To the extent that we no longer have to battle as he did for the recognition of South African literature, we have him to thank in no small measure. Despite the ongoing challenges of corruption, polarisation and pandemic, I believe that upholding Stephen’s legacy starts by recommitting ourselves to an appreciation of the full breadth and richness and irrepressible excitement of South African stories. As Stephen wrote in his poem “It’s about time”, it’s

about time we walked on earth
not concordes state limousines
saracens water or hell
on earth that connects you with me …
time we made time you know
not fences colours legislation
heritage separation progress
time about you and time about me
Stephen Gray was a man who walked on earth. 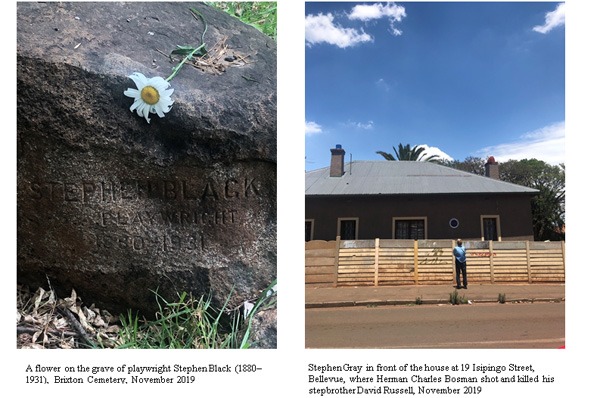