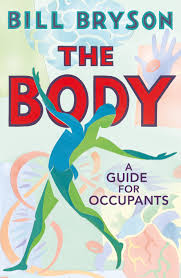 Bill Bryson is perhaps best known for what today might be called his magnum opus, A short history of nearly everything, which was published in 2003. This feels like a lifetime ago. A lot has changed since 2003, and it would perhaps be good if A short history of nearly everything could be updated. Bryson has also written many travel books. I have read most of his books. I have found that Bryson’s style is one that I love. His kind of humour suits me. It’s not for everyone, but those of us who enjoy it have certainly been hooked. I eagerly started to read this latest volume of Bryson, the title of which is really self-explanatory. As per my typical way of proceeding, I went and studied some of the reviews that have been made available online. Most of the reviews of this book that I have seen so far are positive. The criticism that exists mostly surrounds the fact that the book tries to pack too much info into one volume. Also, the way the human body works is that it is very much interconnected, which messes with any structure of a book on the body.

While some of these criticisms might have some substance, readers should bear in mind that the book is certainly not an academic book. If it were an academic book, well, then, I would have never read a book on the human body. Studying anatomy, diseases and physiology is not particularly my idea of how to spend a lazy Sunday afternoon. I would read a book on the human body on only one condition, being that it was written by one Bill Bryson. The success of A short history of nearly everything lies exactly in the fact that a proper journalist such as Bryson can take a lot of complex research and pack it into a digestible volume, suited for an ordinary person such as me.

As with all of Bryson’s scientific writing, this particular book is also written with the underlying assumptions of the theory of evolution. Life is something of a miracle, but humans evolved from earlier species. With his typical humour, Bryson sets out to chronicle how medical science has evolved over the centuries. Modern medical science is one long team effort by scientists over many centuries. Many of the people who contributed are long forgotten, never received any acclaim and died as poor and obscure characters. The chapters cover every aspect of the human body, and there are also chapters on topics such as food, sleep and diseases. While medical science has come a long way, there is still much to be discovered. There’s a lot that remains a mystery. This is a book that is really worth the read; I am even considering rereading it sometime, which is something that I very rarely do with books.