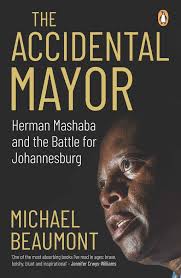 The accidental mayor is a short little book of just around 226 pages, divided into 19 chapters. It details the rise and fall of Mr Herman Mashaba’s mayorship of Johannesburg. The author of this book, Mr Beaumont, is a political supporter of Mr Mashaba, and also worked as his chief of staff in the municipality. Although it is not stated anywhere, I suppose one can deduct that Mr Beaumont is also a former member of South Africa’s official opposition, the Democratic Alliance (DA). One gets the impression that the book was written in a hurry. It is a well-known fact that Mr Mashaba is planning to launch a political party very soon, flowing from the People’s Dialogue movement. Due to the COVID-19 pandemic, this launch is going to take place virtually. Mr Mashaba served his term as mayor as a member of the very same DA, but, as is noted in the book, he took a rather broad-minded approach to his position as mayor. It could not be otherwise, in any case, seeing that the DA led the metro with the aid of a coalition of six other political parties, among these the controversial Economic Freedom Fighters (EFF). The rest of the coalition consisted of the Inkatha Freedom Party (IFP), the Freedom Front Plus (FF+), the African Christian Democratic Party (ACDP), the Congress of the People (COPE) as well as the United Democratic Movement (UDM).

Why did all of these people, with their almost irresolvable ideological differences, decide to set their differences aside? There seem to be two reasons for this. The one reason is that they were all determined to remove power from the African National Congress (ANC), which has descended into a tragic version of its former glorious self. In fact, much of Beaumont’s book is dedicated to detailing the looting and mismanagement of public money by the ANC-led government, the figures of which are simply mind-boggling. Much of this money could have been used to build houses for people who have been waiting since 1994. But perhaps more importantly, the rationale for the move could also be found in the fact that in local government, ideologies tend to play a lesser role in how things are managed. It is all about rendering services and building infrastructure. And so, what followed was a wonderful experiment of a multiparty coalition government – the first of its kind in South Africa and worthy of scrutiny. While the DA has been ruling in the Western Cape and also first came into power with a coalition, the nature of the Western Cape coalition was completely different to that of the one in Johannesburg. This, coupled with Mashaba’s unorthodox and hands-on style of leadership, provided a unique blend of politics.

He is not a career politician. Mashaba’s decision to accept the call to leadership within the DA resulted from his desire to serve the people of Johannesburg. Beaumont goes on to detail many of the successes of their work, much of it aimed at rooting out corruption in the city. The coalition played an important role in the success of their work. Because of this broad coalition, Mr Mashaba was often able to make better-informed decisions, having consulted with his partners. He also never hesitated to take the opportunity to thank his coalition partners openly, much to the anger of many DA loyalists who did not feel particularly comfortable with the coalition. Today, the DA is a party with very big problems. While it appeared that the DA was determined to grow at any cost up until 2016, the party seems to have backtracked somewhat on this idea, especially after the 2019 election, in which the DA lost some support. While some public servants aligned to the ANC tried to derail the coalition government, the most disruptive coalition partner, in the end, proved to be none other than the DA itself. If it can be said that the ANC was terrible as opposition, disrupting council meetings and seeing members of the Congress of South African Trade Unions (COSATU, which is part of the Tripartite Alliance) even taking to racial slurs, the DA was equally poor in governance. Ideology seems to have disrupted the DA internally more than the coalition government was disrupted across party lines by their ideological differences, with many DA members being nothing but covert racists. The DA’s troubles are perhaps summed up best by the fact that many of its supporters are more concerned about the grass being cut in their suburbs than in houses being built for the poor. While the DA was, for a while, courting the social democrats for the purposes of obtaining more power, it has now seemingly settled back into its former stereotype of being a middle-class, suburban party, concerned with the issues of the wealthy.

If I may note some friendly critical observations, one would be that the book seems to be much more of a memoir than a scientifically conducted study. Also, Mr Beaumont is clearly an open admirer of Mr Mashaba. Their relationship comes forth as quite cosy, which places questions on the objectivity of the book – not that any author will ever be completely free from bias. Yet, despite all of this, it remains an important book. Very few popular books focus on the role of local government, and yet local government is perhaps our country’s biggest threat for the years ahead. And, what is more, South Africans must really still learn to work together and put their ideological differences aside. But this is hampered by our history as a nation and by the huge inequalities that continue to haunt us. In the way that the city of Johannesburg was governed, we do now have a model of how a coalition government can work for the better of all.