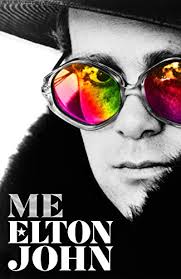 As a child of the 90’s, being born in 1985, I always knew the music of sir Elton John very well. What with Disney’s The Lion King and all of that. I knew that Elton John was famous not only for being a musician, but that he is also a campaigner for human rights, particularly venerated in the LGBTI community, but even far beyond that. But that was about it. I never knew that his real name was not Elton John. I might have guessed his nationality wrong, though his close ties to the British Royalties might have prompted me to a slightly educated guess. It just made sense to learn more about this incredible artist.

Elton John was born as Reginald Kenneth Dwight in 1947. While the book tells the whole story of his life, there is a fine balance between detailing the events and maintaining the pace of the story. I am sure the book could easily have been 500 or even 700 pages. But then, who would continue to read for that long? “John” had a very long career, and what is most important to know from his youth is that he had a troubled relationship with his parents. He would later compare his childhood to that of the film Billy Elliot, a film which brought him to tears. His relationship with his father was particularly very strained. John became much more famous in the United States of America before the same happened back home in England. He toured extensively and made so many albums that I would never remember half of them. In these early chapters of the book, it documents a lot of the early days of Rock and Roll, in which John played no small part. There is a lot written about fellow artists that he knew very well, especially the former Beatle John Lennon (1940–1980).

I have noticed that the first thing that comes to people’s minds when they hear the name, Elton John, apart from the music, is the sex. Yes, and with Elton John, who had relationships with men and women, this is no surprise. The book goes into quite a bit of detail on Elton John’s various relationships. Bearing in mind that this was during the height of the HIV/AIDS pandemic, for which there were no proper medical solutions in those days. John writes about the many friends and acquaintances he lost due to HIV/AIDS, most famously perhaps the Queen frontman Freddie Mercury. But the most disturbing part by far is the drugs. John was addicted to cocaine and used copious amounts of alcohol. This habit almost destroyed him. He lived very lavishly, collecting all sorts of artworks and furniture, so much so that at the ultimate end, he went on to auction most of it. The book details John’s involvement at the football club Watford, one of the very few passions he shared with his father. But what is the most gripping is how John relates the way he changed over the years. It was his friendship with Ryan White (1971–1990) that hugely impacted John and made him question his selfish ways.

Apart from The Lion King, during the 1990’s, Elton John famously performed at the funeral of the beloved Lady Diana, Princes of Wales (1961 – 1997). For this, a reworked version of “Candle in the wind” was performed, which became one of the best-selling songs ever. In the last parts of the book, John details his troublesome relationship with his mother and how he decided to become a father and details the whole process of using a surrogate. This also led him to call it quits on touring and focusing on being a parent.

I loved this autobiography of the legendary Sir Elton John!