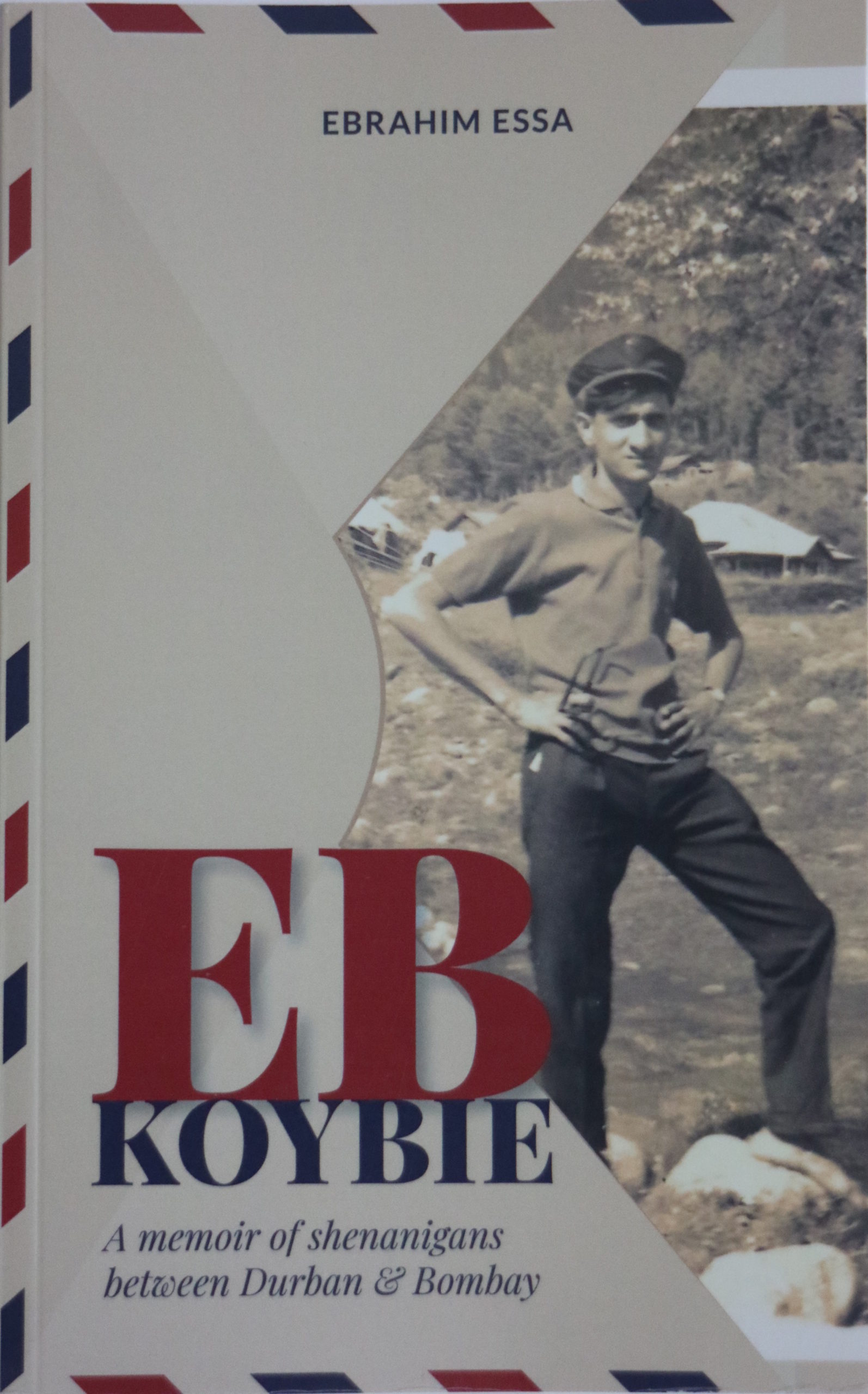 Books should be seen and heard. That's what I believe. So, when I embarked on reading Eb Koybie, I did so at various coffee shops, posting to social media photographs of the book with coffee cup and #BookHappenings accompaniment. I would share a synopsis of the book with waiters and acquaintances. One waiter remarked: "I notice you've been here about three hours and spent most of the time reading that book." I replied that I was working on a review, and handed him the book to scan over. He mentioned, with a twinkle in his eye, that he also dreamed of someday writing a book that would be turned into a movie.

I recounted several versions of writing encouragement. The late legendary journalist Farook Khan would walk up to people and quip: "There's a book in you." Author of Drama queen: The Elizabeth Sneddon story, James P Parker, said to me once: "Everyone has a book in them because everyone has experiences." And in the trailer for Eb Koybie is author Ebrahim Essa's voiceover: "Everybody's story is important. I promise you. Jot it down. Good, bad or ugly. It's all about the struggle for our very existence."

Eb Koybie, loosely translated from Memon as "And for that matter, anybody", is a phrase coined by Essa, which "became somewhat of an inside joke between him and his father". The idea is that while this is someone's memoir, it could be anybody's story, and again serves as inspiration for people to tell their stories with their characteristic flavour.

In the foreword, Azad Essa highlights that his dad imparted a sense of civic participation: "If you wanted something done, you'd have to make it happen, or at least die trying." A childhood account of the great length to which the author went to acquire a packet of comics – collector's items: Superman and Batman – all the way from New York bears testament to this philosophy.

Ebrahim Essa shares the delight of reading: "I was born to read. If nothing else was available, even the telephone directory would do." I recalled my own experience of grade 10 English, with schoolmaster Ismail Asmal encouraging his learners: "Let reading be your lifestyle!" and "Develop a voracious appetite for reading."

Eb Koybie has all the elements of a riveting read: daredevil adventure, childhood reminiscences, mystery and mayhem. Brace yourself for a roller-coaster ride coupled with time-travel backflips through the backstreets of Durban onwards to Bombay aboard the SS Kampala. Meet the witch from Hansel and Gretel, Indian basketwomen, the self-appointed Zorro of Harwin Court and the threatening cane that adds to the thrills.

Storytelling has been Essa's penchant since childhood. To quote an illuminating extract: "… I was still the uncrowned king of storytelling. The path to the throne had not been easy and meant stealing Walla's comics and from his treasury of classics like Treasure Island, Kidnapped and other abridged stories. I was blessed with an uncanny memory to remember only the only important thing in life: fairytales! … To localise the action, I would relate the tale of Goldilocks, but this time around, she stole porridge belonging to the Nagaria family in Wiggins Road, across from the school. Snow White continued eating apples as red as her cheeks, but would instead be poisoned by that old, wicked Mango-Auntie who often released her two black Alsatian half-breeds on poor, innocent scholars trying to help themselves to the ripe mangoes that had fallen from her trees. Midas, meanwhile, merrily converted base metals not into gold, but into precious lead before selling it to scrapyards like Father's. Slowly and surely, I would shift the location of these stories to my newly discovered green forest in the city."

The subcontinental anecdotes that stood out for me include the care of complete strangers like Shantabai and the colourful description of Bengal as the land of wonderful authors and philosophers, such as Rabindranath Tagore, Sarat Chandra Chatterjee and Satyajit Ray.

The arresting photographs, such as the one on the book's cover taken on a visit to Kashmir in 1967, teleport the reader to a bygone era. The chapter subtitles are drawn from movie titles that include Pyaar Kiya to Darna Kya and Around the world in eighty days, adding a theatrical dimension to the supporting text. Essa reflects in the book: "Many motion pictures I saw, made a lasting impression on me, and caused me to develop a habit of relating some events in the movie directly to reality."

The book overflows with anecdotes foregrounding persistence. In one instance, the power of popular culture complemented by a curious disposition sparked in Essa a deep-seated desire to taste marmalade. Enid Blyton's Adventure series provided the impetus. I recollected my own fascination with Ben & Jerry's while on conference in Montréal, having first encountered the ice cream parlour in Salaam namaste (2005).

Essa describes his father's life as ranking high in adventure. Suliman Essa Patel (1910–1974) "never knew the meaning of defeat or fear, and set himself far horizons with his daring attitude, positive foresight and never-ending enthusiasm".

In an age of gizmos, gadgets and multitudes of competing interests, the magical captivation of a book is still a timeless splendour.