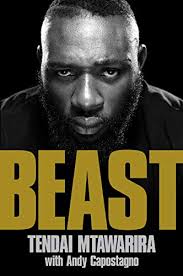 The Beast autobiography came to the public’s attention in 2019 amid some controversy. The publication of the book was delayed on the advice of legal experts. This was related to some paragraphs in which former Springbok coach Peter de Villiers is mentioned. The issue of Peter de Villiers is a matter that rugby supporters can argue endlessly. And they do so ad nauseam. I find Mtawarira’s comments on De Villiers confusing. In one paragraph, Mtawarira would remark that De Villiers "was wise enough to let the players express themselves and he did a good job of motivating and managing the squad" (128). Yet, on the very next page, Mtawarira writes that De Villiers "was handed a really good squad of players. His methods and approach didn’t work with the Springboks" and "Peter didn’t do much; most of the work was done by the players" (129). So, what is it, then? Did De Villiers "manage" the team well? Or did he not do much? Because I tend to think that management is what coaches are primarily there for. What else is the specific role of an international coach? Surely a Springbok coach is not there to teach the Springboks how to play rugby! Surely a Springbok rugby player knows something about discipline, self-motivation, the rules of the game, and so on and so forth. And is each coach not different? Perhaps each one has their own strengths and weaknesses.

The book was withheld from publication until after the 2019 World Cup. It seems that the intended aim of the book had been to publish it before the 2019 World Cup to boost its sales – perhaps for the book to serve as a nice read during the tournament. For the purposes of being a complete record of the Beast’s career, it would have made more sense to write a book such as this after winning a world cup! The Beast was part of both the 2011 and the 2015 sides, the latter securing a bronze medal. Famously, the Boks also lost to Japan at the 2015 World Cup. For the authors to have documented all the experiences of the Beast during the 2019 World Cup Finals in Japan, which surely now is the highlight of the Beast’s career, would have significantly improved the book. But it seems that the publishers wanted to gamble, and it did not play out well. In order to avoid controversy, the publication was delayed until after the 2019 World Cup. The Boks seem to have been plagued by controversies in the run-up to the 2019 Finals, with the most notable one being the controversy surrounding lock Eben Etzebeth, of which nothing came in the end.

There are other concerns about the book as well. The Beast relates his life story in the expected chronological way: from his birth and upbringing in Zimbabwe, to his days as a schoolboy at Peterhouse. The family did not have the financial resources for this particular school, but was assisted after Tendai made a plea to the school’s headmaster. He then goes on to relate how he became a Shark and later a Springbok (during this time, he had to make a transition from loose forward to prop, on the advice of his coaches). Then, in chapter 14, with the heading "Meet the family", the book suddenly goes all the way back into the past, detailing the history of the family, such as where the grandparents came from and what they did for a living. It would have been much better if this detail were included in the first chapters.

But let me also dwell on that which I really enjoyed from this book – the funny parts, in particular. The Beast is really a big and strong man, and this comes with a big appetite. To satisfy this hunger, he employed some unusual methods, which is all related in the book. The book also details how Mtawarira used to ride around on a bicycle, and how he had to rush to obtain a driver’s licence when a vehicle was organised for him. The controversy surrounding Mtawarira’s citizenship also forms part of the book, as do his injuries and his interactions and relationships with other players. As the most capped Shark ever, the Beast has seen it all during all the ups and downs of the franchise. He was also part of the team that famously lost the Super Rugby title to the Bulls in 2007 – the year in which Jake White won the world cup in France. He went on to play against the British Lions in the 2009 series, where the Springboks beat the Lions 2–1. Throughout the book, the text is supplemented by accounts from people who know the Beast personally, like family, coaches and fellow players. This helps a lot and varies the perspective, making the book a little different to a typical autobiography.

The book goes on to reflect on life after rugby and on his hopes and dreams for developing rugby in Zimbabwe, and, in the very last chapter, the Beast picks his "dream team". I do not typically "score" books, but since this is a book about a sporting legend, I decided that I would have to give the book 5 out of 10. I did enjoy reading the book, but I am also disappointed for all the reasons stated above, chief of which is that I do not think the book does justice to this amazing and beloved rugby player.