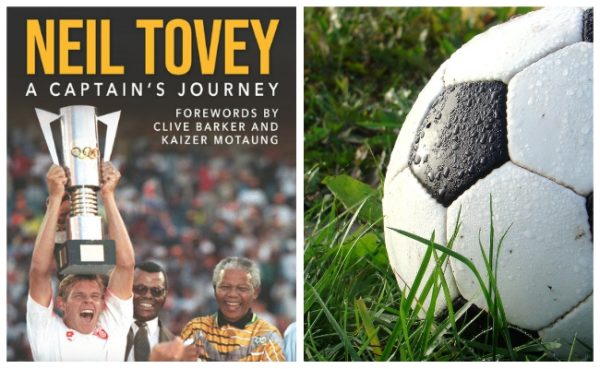 Growing up in a typical Afrikaans school, I was never really much exposed to soccer, or as it is also known, football. There was only one sport for boys and men, and that was rugby. Most people played rugby. Only later on did soccer start to be played, perhaps one or two matches a year, and unlike rugby, there was no tournament or league in which to compete. It was just the school kids playing against each other. My knowledge of soccer therefore was and remains very limited. I try and follow the results of the South African Premier League, but even this proves a challenge, as one is consumed with so many other things. In addition, I am not very fond of biographies and autobiographies. These books tend to be nothing else but a hero-worshipping of the person under discussion. So what stirred my interest in a book about Neil Tovey?

South African soccer is steeped in history. I remember a certain day in February 1996, when I was 10 years old. Around 8 months earlier, the Springboks became the world champions, beating the All Blacks 15-12 in extra time in the final at Ellis Park. And now it was the African Cup of Nations and our very own South African national side was crowned the champions of Africa. And the captain of this team was of course, one Neil Robert Tovey. This event clearly left a big impression on me.

But there is much more to the career of Neil Tovey that being captain of the team winning the African Cup of Nations. I expected as much, and with every chapter that I read, my satisfaction at deciding to read this volume grew. Tovey relates his years as a youth in Durban. As is often the case with great sportspeople, Tovey from a very young age excelled in all sorts of codes of sport, for example cricket and hockey.  But it was to be soccer in which Tovey would eventually settle, first making name for himself at a club called Durban City. His career began during the early 1980’s, at a time when the country was still facing isolation due to the oppressive apartheid regime. At the time, Tovey’s greatest ambition was to play for Kaizer Chiefs – a goal he set his eyes firmly on. But he would go on to achieve much more than this.

From Durban City Tovey moved on to represent Amazulu, which he credits for honing his skills as a soccer player, before eventually joining Kaizer Chiefs. The Kaizer Chiefs football club is of course the most famous South African soccer brand, having been established by Kaizer Motaung in 1970. With the release of Nelson Mandela and other prisoners and the unbanning of the African National Congress and other political groups in February of 1990, South Africa in time became eligible to compete internationally again. The very first side to be selected to represent South Africa after isolation featured Tovey as captain of the side, playing against Cameroon in Durban on July the 7th 1992, a match that South Africa won thanks to a goal by the legendary Doctor Khumalo.

Although Tovey was a gifted player, he had to work hard to achieve success. He stresses the importance of hard work in the book and bemoans the amount of talented South African players who do not step up and become world-class players. Tovey was 34 at the time of winning the African Cup of Nations, and was starting to near the end of his career. He continued playing football for South Africa, but made his last appearance in 1997, helping the side to qualify for the 1998 FIFA World Cup. Unfortunately, he was not selected to play in the world cup. After retiring from playing professional football, Tovey became involved in coaching, to which he also dedicates a number of chapters in the book. He was appointed as the South African Football Association’s (SAFA) Technical Director in 2015, and in the second last chapter, he outlines the plans that SAFA has for the development of football in South Africa. The organization has a mammoth task in ensuring that talented players are developed and given a platform to develop and showcase their skills.

A captain’s journey also details a lot of information about Tovey’s personal life. It is in particular two issues that stand out and is grippingly narrated in the book. There is the accident that happened to Tovey’s son Sheldon, which was a challenging time for the family, as well as Tovey’s two heart attacks, one resulting in his death and being resuscitated, and having to live with the damage to his organs ever since. The near-death experience had a profound outlook on life for the football star: “I knew that I needed a different approach to life. I had to slow down and stop trying to do everything on my own”. (194).

In addition to numerous photographic material, “A captain’s journey” is provided with two forewords, the one by Clive Baker, coach of the winning team of 1996 of which Tovey was captain, as well as one by Kaizer Motaung, founder of the Kaizer Chiefs Football Club. There is also an “afterword” by Michelle Tovey, the spouse of Neil Tovey. A captain’s journey details a fascinating time in the history of South African soccer, with the sport making the shift from semi-professional to professional. South African football today faces many challenges which SAFA is trying to address, but the sport has a strong foundation and I would like to believe a very bright future, as is evident in this book.