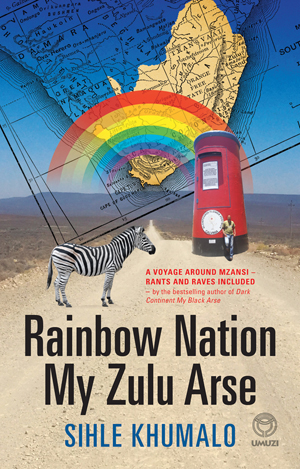 Sihle Khumalo is an author whose work I regrettably know too little about. It appears that Mr Khumalo’s previous volumes, as with this current one, can all be classified as “travel writing” – historically a much more appreciated genre than it is today (again regrettably). Think of the travels of colonial Europeans into the Cape interior that are so highly regarded by scholars, for example, François Le Vaillant (1753–1824), among so many others. My own exposure to travel writing is limited to these, as well as almost all of the books of one Bill Bryson, a British-American author who travelled Europe, Australia and the United States, documenting his experiences. Bryson is particularly known for poking fun at himself, resulting in a lot of humour, and also displays his keen interest in the natural sciences.

Each travel writer exposes as much about themself as the places they visit, in their writing. Sihle Khumalo’s travel of South Africa is not laden with humour. Instead, Khumalo explores the tragedy of poverty in the country, the infrastructure of apartheid and exploitation, and the role of loss of identity. Buckle up, because you might not like everything that he has to say. Khumalo is, among other things, critical of names, such as “South Africa”, the “North West province” and “Soweto” (South Western Townships). According to Khumalo, these names tell the tale of a country whose identity was taken away from it. And, how can one go through life without a strong identity? Khumalo really goes out of his way to research and explain the origins and meanings of the names of all the places that he visits. This, in itself, makes the book a wonderful read, as there are many surprises to the reader along the way.

What is most impressive from the outset in this book is that it is clear that Khumalo is well read on his subject. This applies not only to his knowledge of the history of South Africa, but also to the works of other contemporary travel writers. Khumalo quotes, for example, the well-known Afrikaans travel writer Dana Snyman in the text. The book is steeped in history. “We are encouraged to ... forget about history” (150), he notes, and, by “we”, he is referring to black South Africans. He applies the term “rainbow nation” in much the same way that it is popularly applied: a nation of diversity, but united in a rainbow structure. The inequality that exists in South Africa undermines the idea of South Africa being a rainbow nation, with the filthy rich and the shockingly poor often living a stone’s throw away from each other.

Interestingly, but not noted in this book, is that the idea of the rainbow originated with theologian Archbishop Desmond Tutu, who drew parallels between South Africa and the stories as captured in the Bible, particularly the story of Moses and the covenant that God made with Moses, with the rainbow signalling the promise between God and Noah, and the ancient people of the Middle East. Tutu wrote a book to this effect, titled, The rainbow people of God (Doubleday, 1994). As God, in the Bible, made a covenant with the people of the Middle East, so God is making a new covenant with South Africans. However, Khumalo is quite critical of Christianity in this book, and rightly so, as the missionary history of South Africa is just another painful chapter of our past, where many South Africans were disrupted and experienced loss of their ancestral customs and ways of being and believing.

In travelling South Africa, Khumalo took the time to visit at least a part of every one of the nine provinces of the country. Some provinces receive much more attention than others, for example, KwaZulu-Natal. This is seen by some as the result of a travel book written from a Zulu perspectivei; however, tribal identity is not what defines Khumalo’s book. For the most part, Khumalo simply comes across as a concerned citizen with a great love for South Africa and all the people of the country. Rather than making a call to descend into tribal politics, the book silently bemoans the lack of a common South African identity. Khumalo is a person who goes out of his way to understand the cultures of his fellow South Africans. Despite the word “Zulu” in the title of the book, Khumalo does not come across as having the view that cultural identity is what ultimately defines the human spirit. It is, rather, the willingness to adapt, to deepen understanding and to build new networks – while remaining cognizant and respectful of our rich history and diversity – which defines human beings.

While travelling in the Free State capital, Bloemfontein, Khumalo noticed (155) the Nasionale Afrikaanse Letterkundige Museum en Navorsingsentrum (NALN), and questions why there is no museum for the literature of Sesotho and other African languages. Khumalo might not be aware that, despite the name of NALN, there is also a collection of Sesotho literature housed in this very same museum. Perhaps, this is a sign of the fact that either the name NALN is somewhat misleading, or the collections of NALN remain unknown to most South Africans (perhaps both?). Khumalo then goes on to point out the spelling of the street name “Merriam Makeba”, very close to the museum, perhaps somewhat indicative of the laissez-faire approach that South Africa often takes with regard to its heritage.

When the final page of this book was turned, I was left with something of a hollowness that is hard to explain or comprehend. The only words that sprang to mind were: Is this it? There is so, so much more to South Africa! I wanted to shout from the rooftops. Yet, that being so, the purpose of this book was never to provide a comprehensive study of the history and peoples of South Africa. Rainbow nation my Zulu arse is more like a whirlwind through South Africa. It is a painful reminder of the structural injustices that persist in South Africa, the divisions that continue to haunt the country, and the fact that the rainbow identity – so much associated with the negotiated settlement of 1994 – in fact hovers between extremely fragile and non-existent.

I would encourage anyone and everyone with an interest in South African history to read this book, not only for a better grasp of the past, but for greater insight into the present and the future.