The winner of the 2022 Ingrid Jonker Prize is Jacques Coetzee with his debut collection An Illuminated Darkness published by uHlanga. Congratulations to both poet and publisher.

One of the judges praised the meditative tone of the collection and pointed out that Coetzee “does not strive for technical effects, but seems more concerned to express delicate, deeply felt intangibles of life, silence, death, love – often in the context of blindness and the pain and anger, however sublimated, that goes with it.”

Another judge observed that the poet “writes with a musician’s ear and heart’s depths of listening that consciously unfolds the lines of the poems, particularly the shifts in rhythm.” 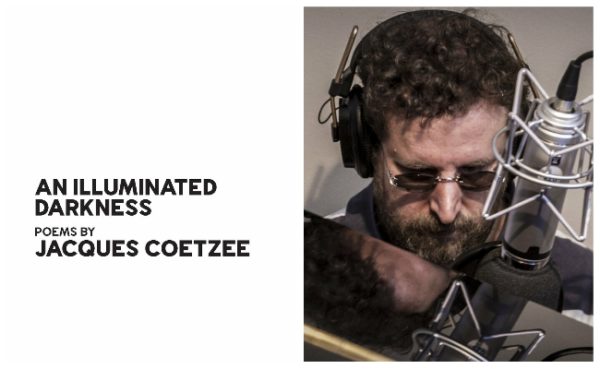 Twelve entries were received for the 2022 prize and many contenders received praise from the judges. One collection, namely Yellow Shade by Dimakatso Sedite (Published by Deep South) was hailed by the judges as “a welcomed contribution to the contemporary tide of Black women publishing new work.”Yellow Shade was joint winner of the 2022 NIHSS Award for best book of poetry.

Sue Woodward’s between the apple and the bite, is described as “an exploration of the experience of women through the personas of mythical and historical figures, or an intersection of both”.  It is “a feminist take on ‘inconvenient or disobedient’ women through the ages” and the three structured collection is hailed for its “skilful thematic weavings throughout and the grounding footnotes, making for a refreshing and informative read.”

This year’s judges were Malika Ndlovu, Ken Barris and Arja Salafranca. Judges of the Ingrid Jonker prize are unaware of one another’s identities until judging is complete.

The Ingrid Jonker Prize is awarded in alternate years to the best debut collection in English or Afrikaans. The winner receives a cash prize dependant on the interest accumulated in an account originally established for this purpose.

Marius Crous is the convenor of the Ingrid Jonker committee. The other committee members are Sally-Ann Murray, Jolyn Phillips, Vincent Oliphant and Brian Walter.

An illuminated darkness by Jacques Coetzee: a review