Sindiswa Busuku-Mathese’s debut collection of poetry Loud and yellow laughter, published by Botsotso, is the winner of the 2018 Ingrid Jonker prize for poetry.

Busuku Mathese’s entry was described by one judge as "completely original: the presentation of family history as a play, in which the narrator is an unreliable character". The poet was praised for the "the mix of WW2 history, the narrator’s dilemmas about being adopted, and the way she manages to weave these together without ever losing her balance or falling into incongruity". Another judge highlighted how Busuku Mathese’s "memoir in the form of a collage … offers fragments in several voices, some of them 'reconstructed'. [The collection] 'movingly reflects the quest of the 'The Girl Child', as intimate 'curator' of family memory and experience, to integrate the surprising puzzle that is her current self".

A record twenty entries were received for the 2018 prize. Many contenders received praise from the three judges. Collective amnesia by Koleka Putuma was hailed as "practically a book of directions, a chart of expression, for thousands of young South Africans, grappling with the issues she raises … [the poet’s voice is] substantive and compelling" A season of tenderness and dread by Abu Bakr Solomons "makes most satisfying reading; … The volume has broad reach; the poems [are] deeply moving, questioning or enlightening." Metaphysical Balm by Michele Betty was commended for "the exceptional skill in which the author handles intertextuality". Other volumes mentioned appreciatively in the judges’ reports included Questions for the sea by Stephen Symons, Unlikely by Colleen Crawford Cousins, Modern Rasputin by Rosa Lyster, Thungachi by Francine Simon and Serurubele by Katleho Kano Shoro.

This year’s judges were Sindiwe Magona, Helen Moffett and John Cartwright. Judges of the Ingrid Jonker prize are unaware of one another’s identities until judging is complete.

The Ingrid Jonker Prize is awarded in alternate years to the best debut collection in English or Afrikaans. The winner receives a cash prize dependant on the interest accumulated in an account originally established for this purpose.

Ronel de Goede is the convenor of the Ingrid Jonker committee. The other committee members are Leon de Kock, Finuala Dowling, Beverly Rycroft and Vincent Oliphant. 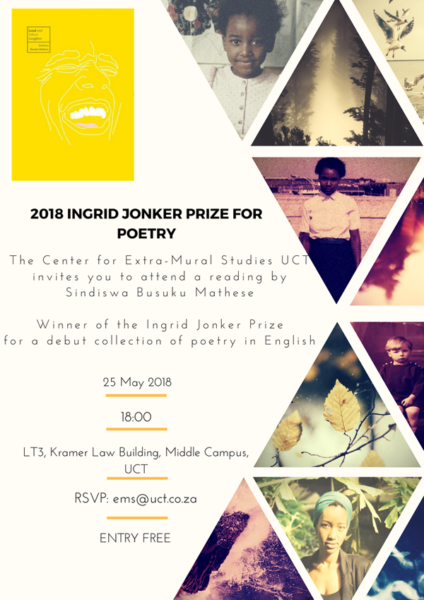